Berekum Chelsea to win to nil

A home game against the bottom club should be an easy afternoon at the office for Berekum Chelsea but will it be? Find out with our Berekum Chelsea vs Elmina Sharks match preview with free tips, predictions and odds mentioned along the way.

Elmina Sharks have been one of the lowest-scoring teams in the Premier League this season; they've scored 21 goals in 30 league games, only one team has scored fewer goals. To be fair, 17 of those goals came at home, Elmina Sharks managed just four goals in 15 road games. As a result, Elmina Sharks' road games have mostly been one-sided in goal scoring terms; at least one side failed to score in 10 of their last 12 league games away from home. Similarly, Berekum Chelsea's games usually don't feature goals from both teams; at least one side blanked in six of their last eight games. On that note, at least one of these teams should fail to score.

Can the basement club, Elmina Sharks, bag a much needed win?

Elmina Sharks have been well off the pace so far this season and things don't get any easier for them as they travel to a Berekum Chelsea side that sit ninth but with the knowledge that a victory could take them all the way up to fifth if results go their way elsewhere. Then again, this is football; let's see how the teams are likely to set up.

Berekum Chelsea ended their three match winless streak by beating Asante Kotoko on the road last weekend; they are now eighth on the table, with 11 wins in 30 league games. Berekum Chelsea will be going up against Elmina Sharks on Sunday; they'll hope to make it two wins in as many games.

Elmina Sharks have been the worst team in the Premier League so far this season; they've played 30 league games, and won just five of them. As a matter of fact, Elmina Sharks are without a win in their last six games; they'll hope to snap that unwanted streak as they take a trip to Golden City Park.

A quickfire FAQ on Berekum Chelsea vs Elmina Sharks 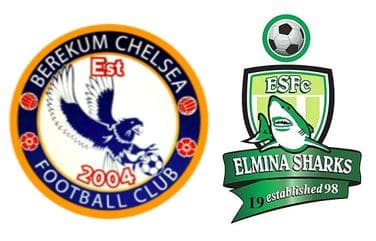