Cristiano Ronaldo's move from Real Madrid to Juventus came like a shot out of the blue over the summer, with the perpetual reports of a Bernabéu exit, surfacing almost every year since he left Manchester United, finally coming true.

But perhaps even more surprising, given the club's long-standing desire to own the best and most-glamourous talent in the game, was Madrid's decision to not replace their outgoing superstar.

Instead, it seems, the European champions have put faith in the cast of elite players and budding prodigies already on their books, backing these gifted individuals to step out from Ronaldo's shadow and into the light, filling the void of one major exit through the incremental gains of several world-class performers.

One such player seemingly radiating in Ronaldo's absence this season is Karim Benzema.

The striker arrived at Madrid the same summer as Ronaldo, and Kaka, in 2009. The trio, costing a combined €196million, represented possibly the most ambitious player-recruitment drive ever made during a single off-season.

The Frenchman, signed from Lyon aged just 21, was very much the third wheel; one for the future. Ronaldo and Kaka – as well as Xabi Alonso, Álvaro Arbeloa and Raúl Albiol, who also joined that summer – were statements of immediate intent.

Benzema spent his initial seasons in the Spanish capital job sharing in the striker's position with Gonzalo Higuaín. Gradually, Benzema became viewed as the outstanding choice for the role, necessitating Higuaín's 2013 exit for Napoli.

The main reason behind Benzema becoming the established first-choice striker for Los Blancos was, rather than his direct goal threat, his ability to act as facilitator to the increasingly prolific Ronaldo.

Benzema was selfless in his efforts, running channels and dropping deep to open up space for the Portuguese to cut in from the left, and making a pass to the No.7, rather than a shot for goal, his first thought whenever in possession in the attacking third.

Indeed, as a result, Benzema has only twice broken the 20-goal barrier in a single La Liga season, with returns as low as eight, 11 (twice), and just five in 32 games last term. Only once in nine full seasons with Madrid has be bettered the 31-goal haul in all competitions from his penultimate season with Lyon, netting 32 in 2011/12. 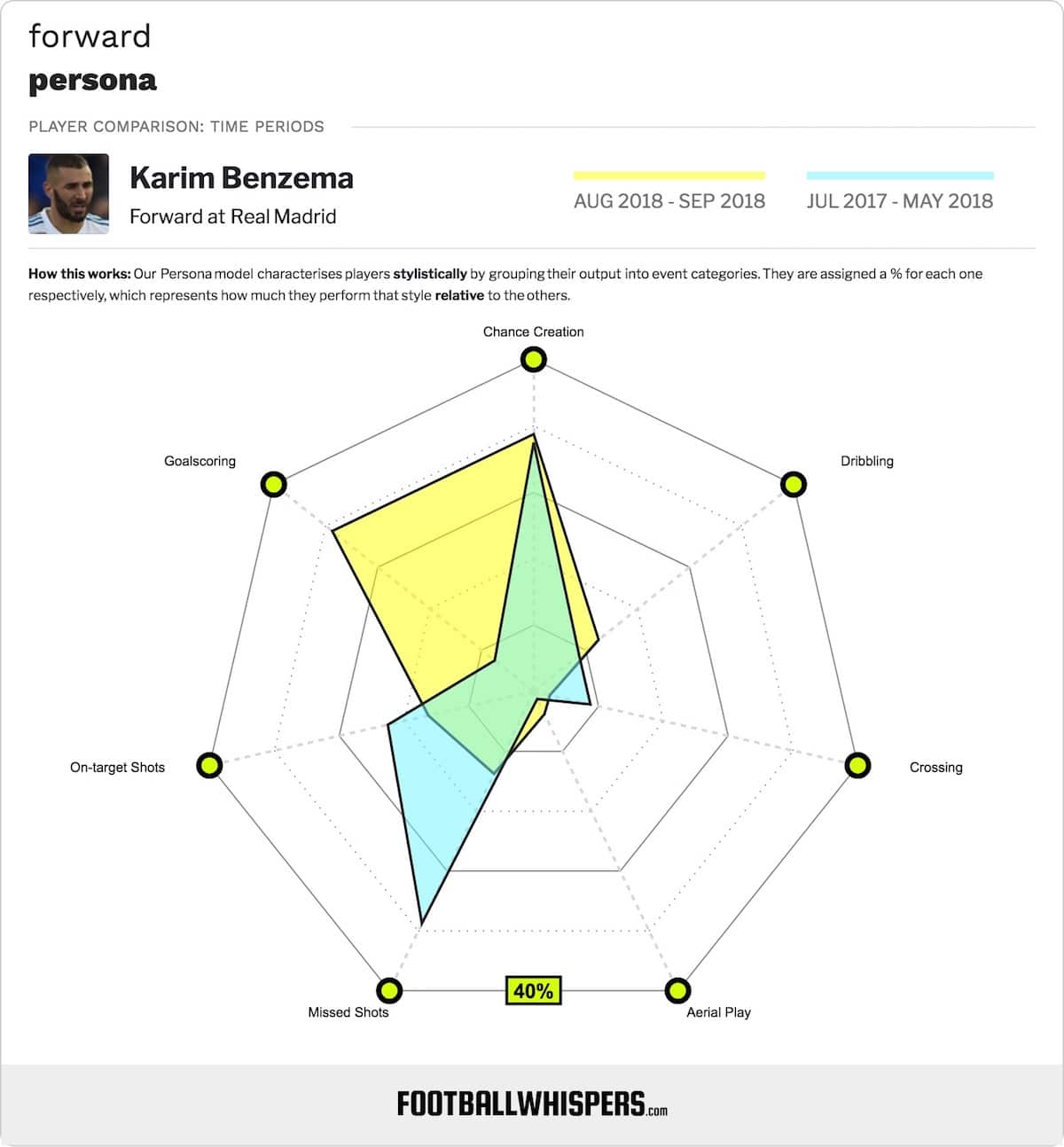 Now, though, with Ronaldo out of the picture, Benzema is the focal point of the Madrid attack for the first time; Gareth Bale may dabble more regularly in the spectacular but the French No.9 has rediscovered his ruthless streak.

The above Football Whispers Player Persona diagram illustrates the shift in Benzema's priorities this season. With four goals in four La Liga games, he is just one away from matching his tally for the entirety of the previous campaign.

More instructively, though, Benzema's drop in creativity, suggesting a return to a more conventional No.9's remit, is stark. The 30-year-old's per-90-minute average for expected goals assisted (xA) – the metric which measures the quality of chances created – has fallen to just 0.09 this season, having been 0.27 last term.

Additionally, his average expected goals (xG) – the cumulative measure of chance quality for shots taken – has increased, rising to 0.48 per 90 from 0.42.

For nine years, Benzema sacrificed his own scoring output for the good of the team, for the good of Ronaldo. Now, with Ronaldo out of the picture, he is taking centre stage.