Pre-season can be so deceptive. Louis van Gaal's first summer in charge of Manchester United saw exhibition victories over Liverpool and Real Madrid before his deathly dull football turned everyone against him.

Julen Lopetegui's Real Madrid thumped Juventus and AC Milan, only for a dismal start to the season ending in the Spaniard losing his job fourth months into his reign, humbled and humiliated after a 5-1 defeat to Barcelona.

Yes, pre-season can be so deceptive, which is why Liverpool fans tried not to get excited when Christian Benteke, the £32.5million star signing of Brendan Rodgers' last summer in charge, produced a moment of genius during his first outing for the club.

Controlling João Teixeira's flick on his chest, the Belgian thumped an unstoppable volley into the top corner. Rodgers described it as a “wonderful, wonderful goal.”

The problem was it was against Swindon Town in a meaningless game. Most people wouldn't have watched the game (why would they?) and, after seeing the goal on their phone, would have perhaps been excused for backing Benteke to score another few just like them.

Others – those who watched the game – would say that he actually looked off-the-pace and was outshone by fellow summer recruit Roberto Firmino.

That it was his most eye-catching moment in a Liverpool shirt speaks volumes of the expensive misstep that was the Belgian's spell at the club. At the time their second-most expensive signing, his travails marked a turning point in Liverpool's recent history.

Although they deemed spending £16.5million on Mario Balotelli a good idea, Benteke is perhaps the most high-profile failure of Liverpool's notorious transfer committee's and a reminder of how muddled and perplexing their recruitment strategy was prior to Jürgen Klopp's arrival in October 2015.

There can be no question that the former Aston Villa forward, who scored ten goals in 42 appearances, under-performed. There can, however, also be no doubt that Liverpool's critical lack of direction – failing to supplement his arrival with natural wingers who possessed the crossing ability to utilise his presence – that summer gave the striker only a slim chance of succeeding.

A quick look at Liverpool's recent acquisitions – from an accomplished goalkeeper in Alisson, a commander of the defence in Virgil van Dijk or a razor-sharp forward to complete the attacking puzzle in Mohamed Salah – demonstrate clear strategy and progressive thinking. While he may have started slowly, Naby Keïta, a fearless and ferociously talented box-to-box operator, will elevate the midfield in years to come.

It's worked. Over the past year, Van Dijk has helped turn a leaky back-line into a sturdy one, Salah has scored goals at an alarming rate and Alisson has, in three months, offered more steadiness and precise distribution than Simon Mignolet has in five years.

Yes, these are signings that have markedly improved Liverpool, transforming them into genuine title challengers.

If there is a problem area, it has been addressed and addressed well. It's a shining example of how to keep a football club evolving in a fast-paced world and it's a far cry from a time when a group of besuited executive types backed Rodgers' demands to sign Benteke before failing to back him with players that brought out the best his abilities.

And, of course, it all began so well. the forward followed up his pre-season ‘heroics' with a goal on his home debut against Bournemouth.

But even that came with complications. Just a few days later, the Premier League admitted that the goal should not have stood (Philippe Coutinho had strayed offside and attempted to play the ball before he scored).

Benteke's next goal was sensational, albeit consolatory, pulling one back during a 3-1 defeat to Manchester United at Old Trafford with a glorious overhead kick.

Any dreams that he was going to replicate the rich vein of form that made him such a talisman for Aston Villa were soon shattered, however, as Rodgers, one hour after overseeing a 1-1 draw against Everton, was sacked with the Reds languishing down in tenth place.

Benteke probably experienced mixed feelings. The man who had fought to seal a dream move to Anfield was dismissed just two months into the season. However, it was that same man whose tactics and team selection stifled his best qualities.

Seemingly failing to learn from the toils of Balotelli and Rickie Lambert, Rodgers failed to recognise that he didn't have the players to service Benteke's predatory instincts. The Belgian was, at times, supported by Coutinho and Firmino, two gifted Brazilians who were not natural wide players. Nor was Danny Ings, who was inexplicably shifted out wide for that trip to Old Trafford, after which Jamie Carragher accused Rodgers of having an ‘obsession' with using 4-3-3.

One of the main problems was the failure to sign a direct replacement for Raheem Sterling, who that summer joined Manchester City.

Lazar Marković (somehow still a Liverpool player at the time of writing) had been loaned to Fenerbahce after an underwhelming first year at Anfield, Jordon Ibe was still raw and James Milner, who in recent seasons has shown what an asset he can be from the flank, was deployed in central midfield.

There was damning evidence, too, that Benteke's capture was a spectacular misfire when, in the 1-1 draw with Norwich City, Liverpool seemed a slicker, more coherent attacking unit after he was replaced by Ings at half-time.

The former Burnley forward scored just three minutes after being introduced and forged a more effective understanding with Daniel Sturridge, with whom Benteke had failed to click in their first start together.

A week later, with the Belgian absent, Liverpool scored three goals in a game for the first time six months as they edged his old side Villa 3-2 with Sturridge scoring twice before exiting Anfield to a standing ovation from the Kop.

By the time Benteke was back in the team, Rodgers was gone. But, with his confidence dented, the 25-year-old faced an uphill battle convincing the Northern Irishman's successor of his starting credentials.

Once the German took over, the striker edged closer and closer toward the exit door. He started just 13 games in seven months under Klopp, was used sparingly as a substitute and seemed to receive the kiss of death when the coach handed him the captain's armband for the FA Cup clash against Exeter City. 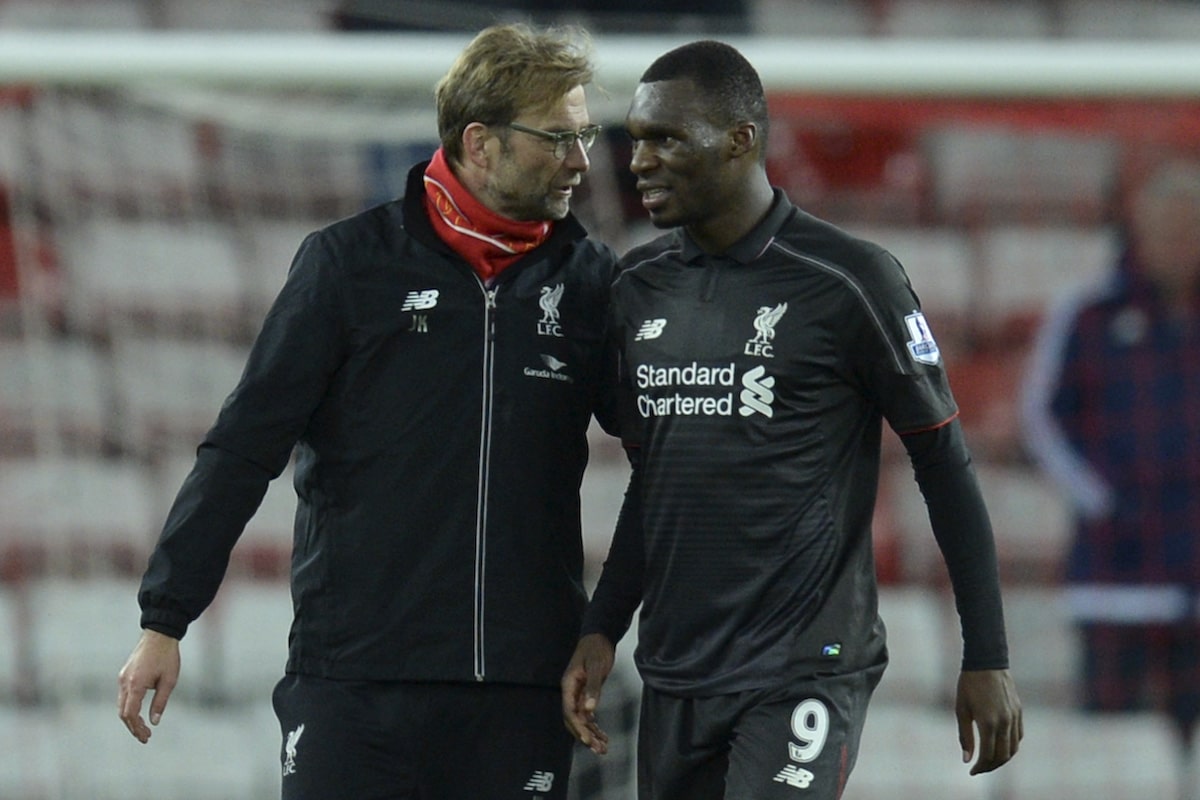 It was a token gesture which suggested that he was no more than a second-string player, leading a team that included ‘where are they now' Liverpool oddities such as Jerome Sinclair, Ryan Kent, Cameron Brannagan and Kevin Stewart out against a fourth-tier side.

From there, Benteke was marginalised and his fading relevance was summed up with being reduced to late cameos during the club's run to the Europa League final. After a trying first year on Merseyside, he travelled to the European Championships in France knowing full well his time was up.

Clearly not part of Klopp's plans, a frustrated Benteke plotted his escape and, when Crystal Palace came calling, he happily obliged, bringing the curtain down on an immensely frustrating spell with the Reds.

Benteke's move to Liverpool was doomed from the outset. He had been excellent at Villa, with 49 goals in 101 games, and aced an audition in front of Rodgers when he led the Midlands club to a stunning 3-1 victory at Anfield in December 2012. After that game, Rodgers hailed the Belgian as ‘outstanding,' sowing the seeds for an admiration of the player that would ultimately cost him his job.

Undoubtedly, Benteke has to shoulder some of the blame. While he did not fit Rodgers' system, on too many occasions his touch deserted him, later admitting that his performances were ‘mixed'.

Benteke determined Rodgers' fate at Anfield but Klopp saw no future in trying to shoehorn the player into his own vision.

Then, in August, Palace sealed his signature for £27million. Commenting on the deal, then Eagles boss Alan Pardew said that he was a ‘fantastic fit' at Selhurst Park. “His style of play, the way he feeds off crosses. He’ll enjoy that with the wide players we have,” Pardew said. He even backed up Benteke's capture by signing Andros Townsend from Newcastle. With Townsend and Wilfried Zaha, Pardew had clearly taken heed of Rodgers' mistakes.

And yes, while perennial injury struggles and a dramatic loss of form have combined to blunt his reputation, he scored 15 Premier League goals in his first season at Palace, who finished 14th, once again reminding those who doubted him what was possible when he had adequate service.

Without that, he was always doomed to fail at Anfield.