Mauricio Pochettino has proven in recent weeks just how astute he is at picking his Tottenham Hotspur team.

While there are certain players who are practically guaranteed starts in big games – Hugo Lloris, Jan Vertonghen, Toby Alderweireld, Dele Alli and Harry Kane among them – Pochettino has thrown up a couple of selection surprises in recent weeks which have bore fruit.

For the trip to the Santiago Bernabéu to face Real Madrid in the Champions League, he caught everyone off guard by starting Fernando Llorente alongside Kane in attack. By threatening Real's defenders with his physical presence in one-on-one situations, it forced Casemiro further back and prevented Spurs from being overrun in the middle of the park.

He then started Serge Aurier on the left side of his defence against Liverpool to neutralise the threat posed by Mohamed Salah last week while using Son Heung-min alongside Kane in a 5-3-2 to exploits the Reds' high defensive line to devastating effect.

However, Pochettino has come in for some criticism – justifiably so perhaps – after starting Eric Dier – a one-time Manchester United transfer target – in defence ahead of Davinson Sánchez against the Red Devils on Saturday.

The battle to remain on Manchester City‘s coat-tails turned out to be a poor spectacle at Old Trafford as Pochettino and his counterpart José Mourinho cancelled each other out for most of the clash.

That was until the 81st minute when Anthony Martial pounced on Romelu Lukaku's flicked header to scuff home a winner and give Mourinho three precious points after two games without a win.

For Pochettino, though, it completed a disappointing week following Spurs' Carabao Cup exit at the hands of West Ham United. Now, it feels like the momentum gained from last week's win over Liverpool has crushed ahead of the visit of Real Madrid to Wembley on Wednesday night.

Saturday's game was tense, closely-contested and, in truth, it could have easily gone Tottenham's way. While they lacked a killer instinct without the injured Kane in attack, Alli missed a gilt-edged chance when the score was 0-0 which could have sealed a dramatic victory for the north Londoners.

Moments later, Martial – who replaced Marcus Rashford in the 70th minute – seized his opportunity, running between Dier and Vertonghen before bundling the ball home.

The warning signs had been there. Just three minutes after the Frenchman's introduction, a neat backheel found Nemanja Matić, who slipped a ball past Dier to Lukaku, who powered past Vertonghen before forcing a fine save from Lloris.

As you can see below, as Matić comes forward, Dier, who was a key Manchester United transfer target in the summer, isn't aware of Lukaku's run over his right shoulder. 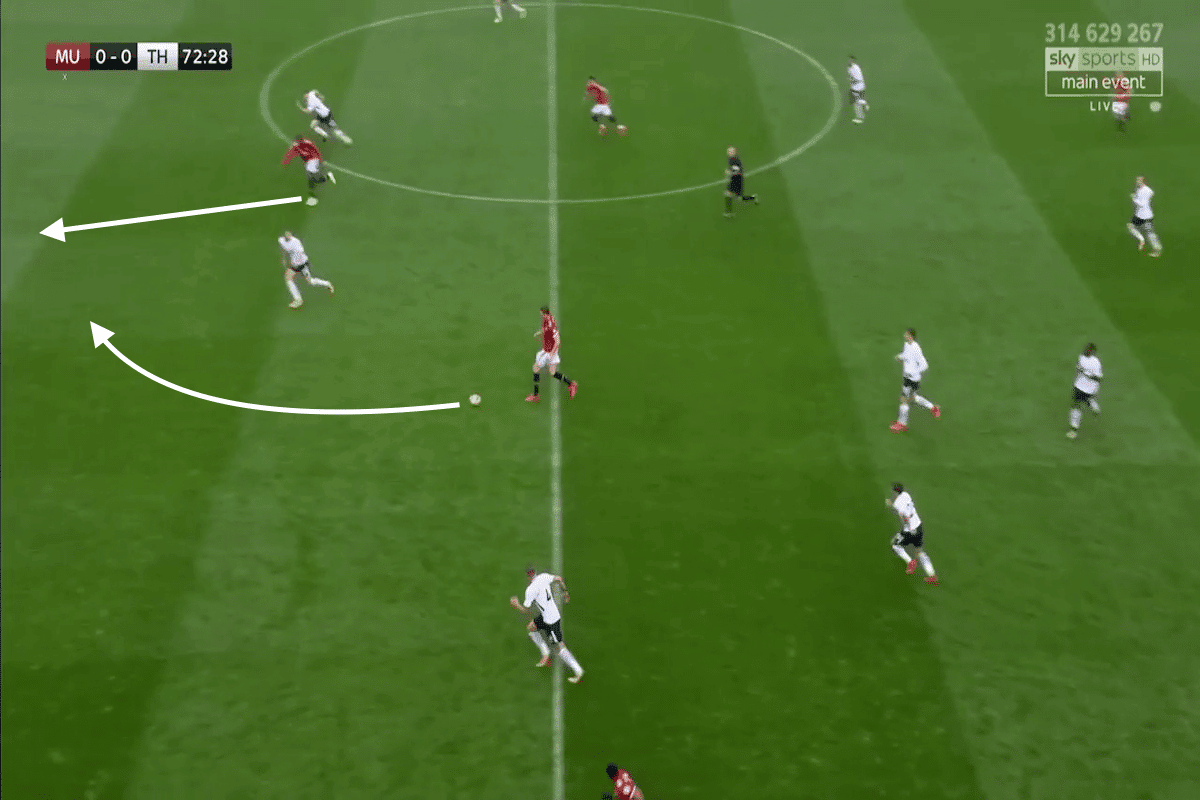 When the midfielder plays the Belgian through, Dier commits himself by sticking out a leg. With only Vertonghen covering, Dier takes himself out of the game and leaves his teammate one-on-one with Lukaku.

To Vertonghen's credit, he forced United's top scorer wide which made the angle extremely difficult and allowed Lloris to punch the ball away. 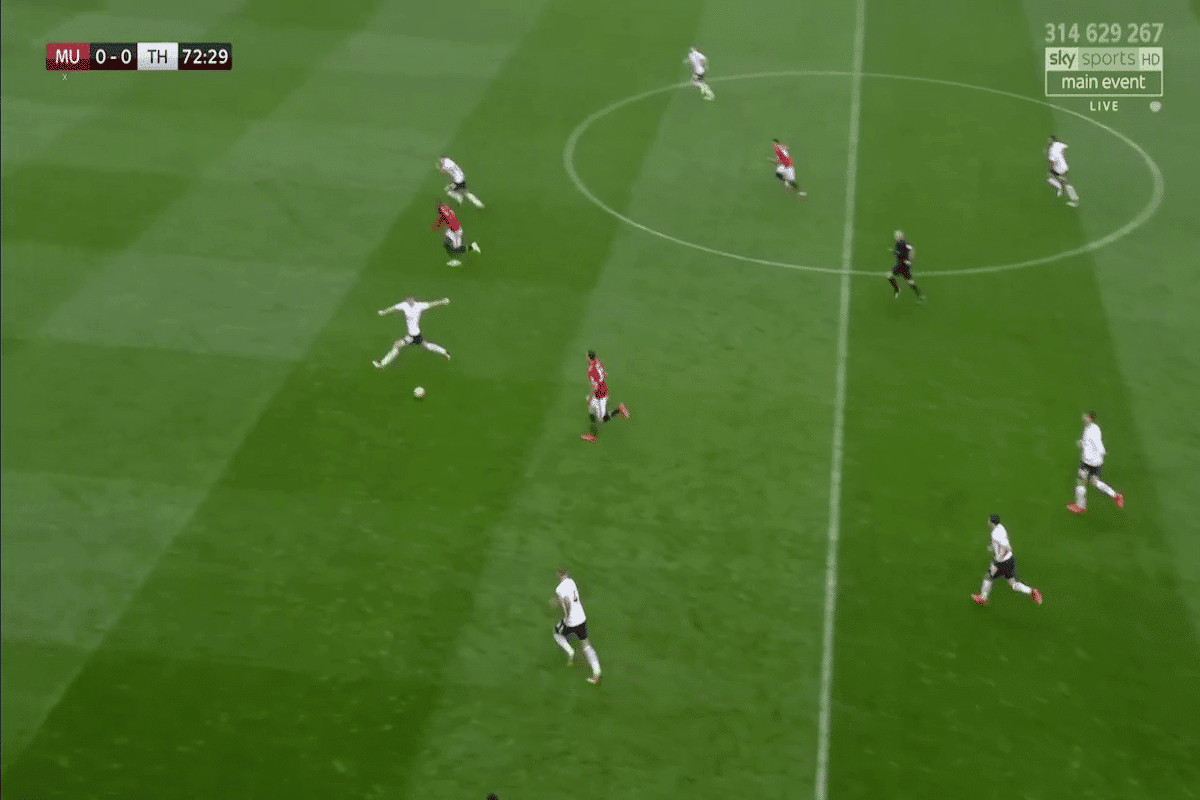 However, eight minutes later, there was another lapse in concentration. Only this time Dier's error in judgement cost his team two points.

David de Gea launches a long ball to Lukaku, who outmuscles Alderweireld to flick a header towards an onrushing Martial. Alderweireld did not cover himself in glory by allowing Lukaku to rise unchallenged, but Dier was caught napping.

The analysis on Match of the Day was spot-on, too. Alan Shearer argued that Spurs' back-line should have been five yards deeper by the time de Gea was launching his punt up the field.

Already out of position when Lukaku wins the header, Dier then fails to spot Martial's run and, crucially, cannot react quickly enough. 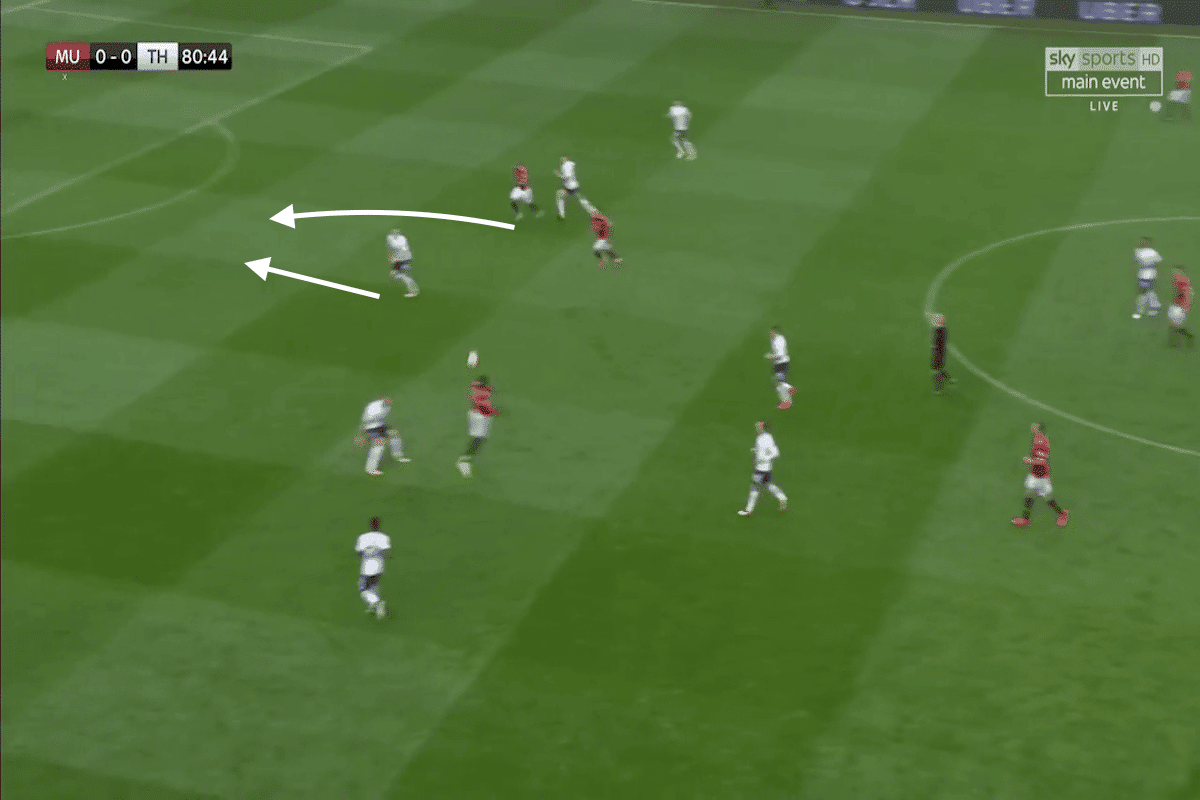 After allowing Martial to run in behind, Dier scrambles to recover as Vertonghen tries to catch up with the Frenchman. 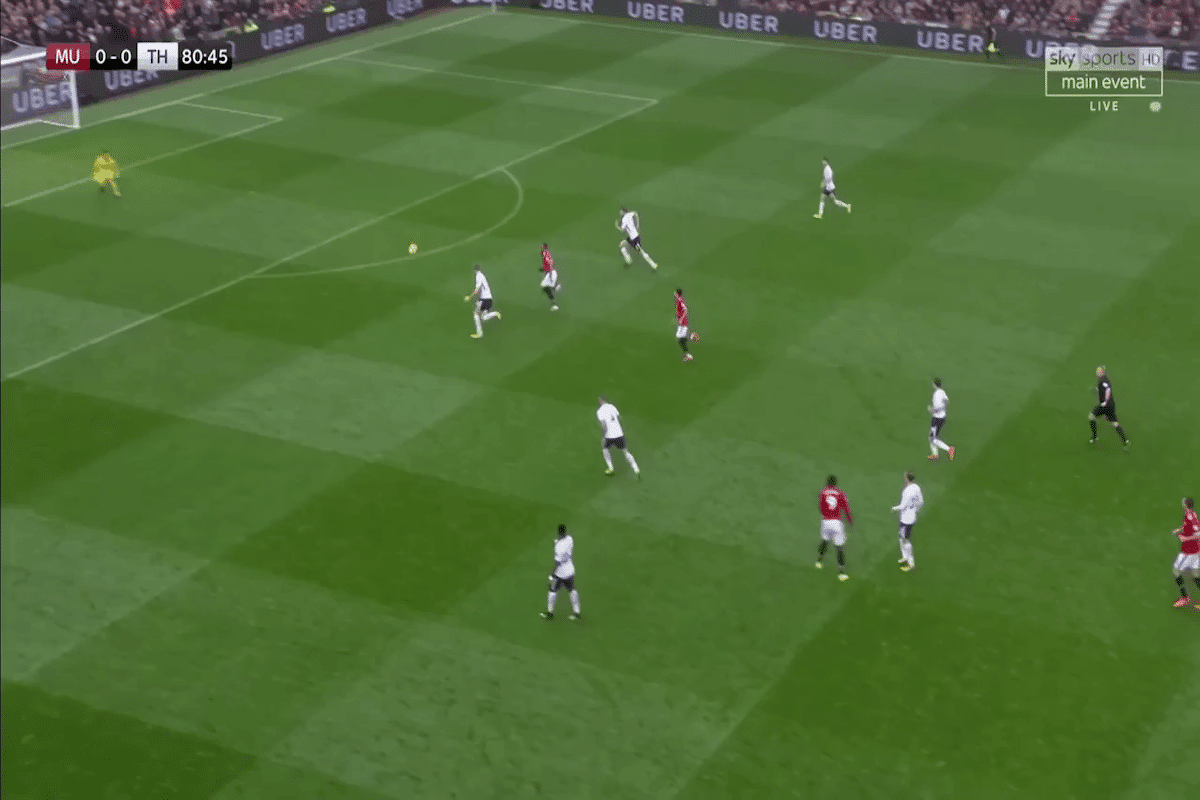 However, the England international can only offer a weak attempt to knock Martial off his stride and the United winger brushes past him before scoring. 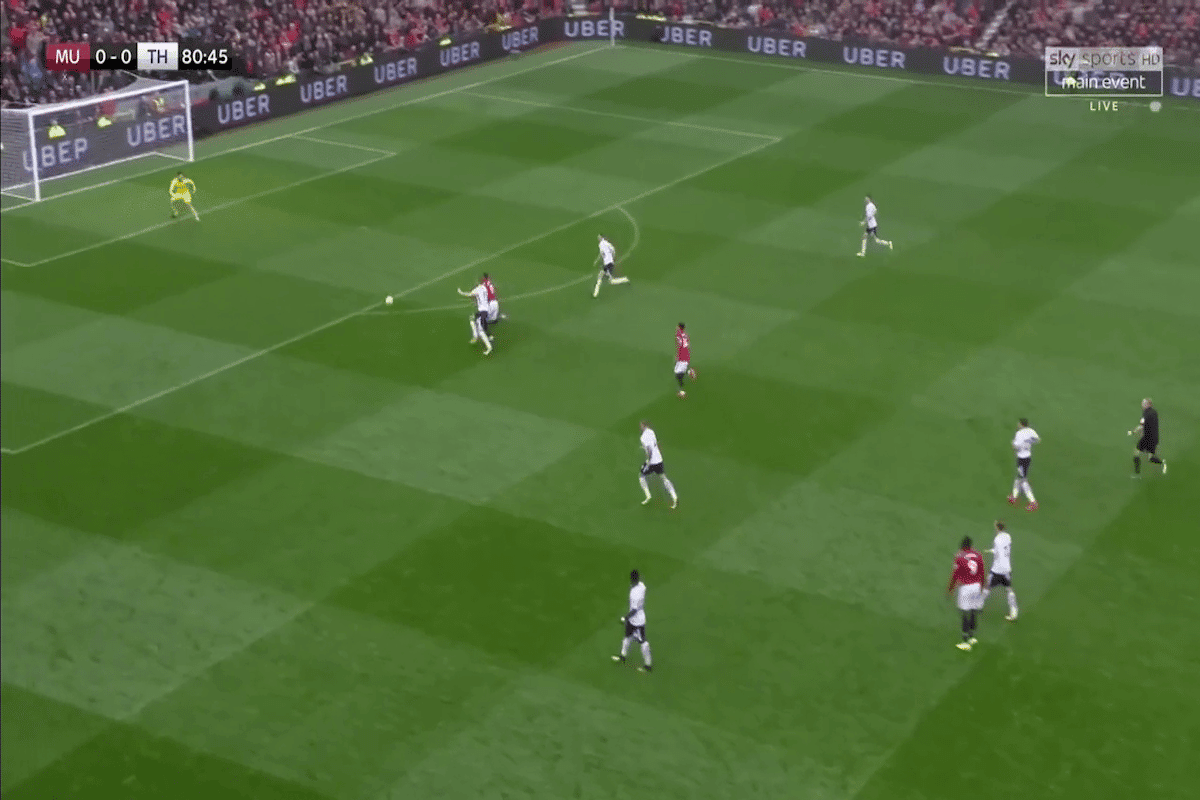 Shearer's take on Dier's contribution is difficult to argue with.

“He's got to expect that Lukaku is going to win that ball and he's got to cover, but he didn't cover at all.

“By the time he realised, it was too late. He's got to expect Lukaku to win that ball and has to run in behind but he didn't and he was too weak and that's cost them the game.”

Dier didn't have a poor game. He was solid in the first half and his stats were solid, winning two aerial duels, making three interceptions and making six clearances.

Sánchez Unlucky To Be Benched

However, Sánchez would have been excused for feeling aggrieved for being dropped to the bench for this game. Since signing from Ajax in the summer in a £42million deal, the 21-year-old has been thoroughly impressive alongside Alderweireld and Vertonghen in Spurs' back-line.

In an acid test at the Bernabéu, he came of age in a performance that belied his tender years, standing up to Cristiano Ronaldo, Karim Benzema and Isco as Spurs earned a hard-fought point.

Spurs have been a tough nut to crack when the Colombian has been in the side, keeping five clean sheets and conceding just five goals in the nine games he has started.

His defensive positioning and reading of the game were also missed midweek as West Ham scored three goals in the second half at Wembley to dump Tottenham out of the Carabao Cup.

Sánchez has proven that he is comfortable in Pochettino's system and, unlike Dier – who is naturally a holding midfielder – he has a heightened sense of anticipating danger from the back-line.

In the screenshot below, from the Madrid game, you can see how he tracks the run of former Tottenham playmaker Luka Modrić, before forcing him into a wide position and dispossessing him to break down the attack. 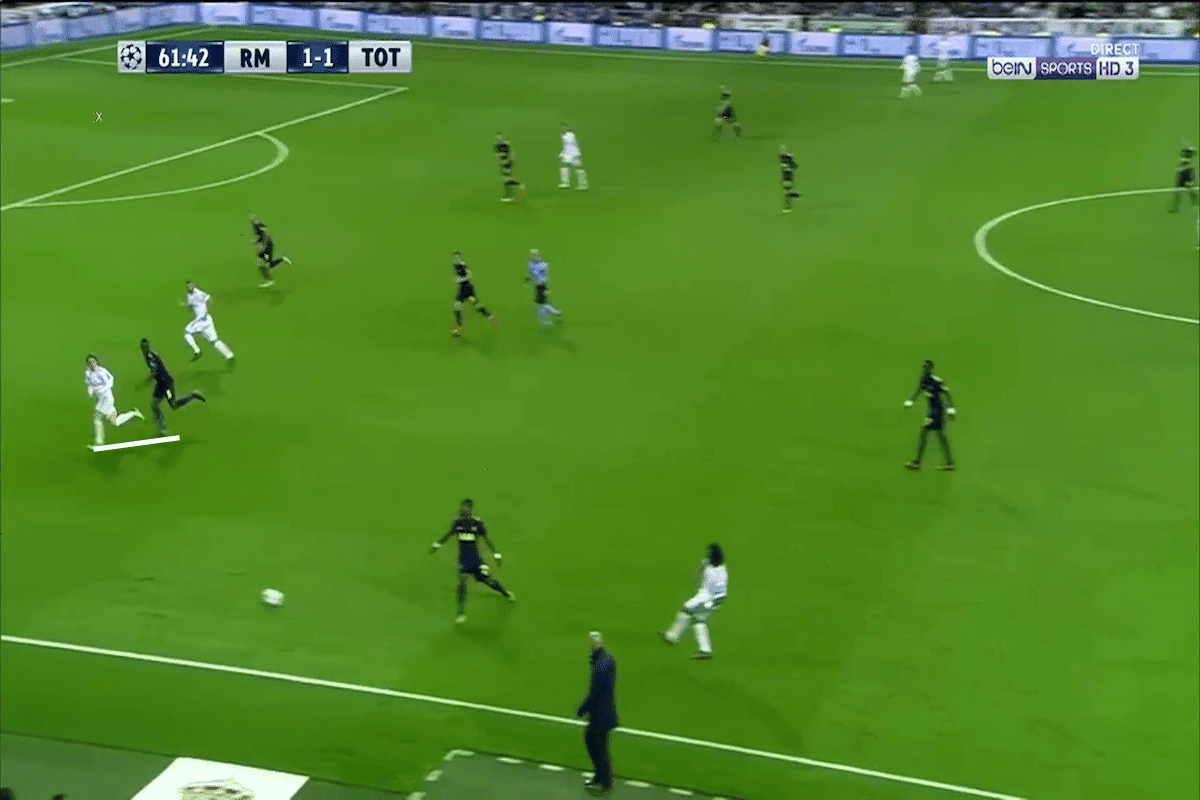 Sánchez was alert to keeping touch-tight to Modrić, whereas Dier failed to track Martial's run over his shoulder. With the kind of form Sánchez has been in, it's difficult to imagine the Colombian switching off at such a critical point in the game.

Then again, we'll never know. He may have made a mistake just like Dier's that would have cost Spurs a goal. Regardless, his omission was a surprise, and Dier's mistake only prompted Spurs fans to vent their frustration on Twitter.

It will be interesting to see how Pochettino lines up at the back for the visit of Madrid on Wednesday. They can ill-afford further slip-ups at the back with the reigning European champions in town.