Some clubs have that knack for hitting signings out of the park when it comes to a certain positions.

Atlético Madrid, for example, are famed for their ability to unearth and develop world-class strikers. Juventus, meanwhile, have had countless world-class defenders in recent years.

Brighton and Hove Albion are not a name you'd expect to see alongside these two clubs, but the Seagulls have managed to carve out a niche – they’re currently the Premier League side producing and nurturing in-demand centre-backs.

Lewis Dunk was linked with a £45million move to Leicester City in the summer to replace Harry Maguire. Shane Duffy was also reportedly a big-money target for the Foxes too but both stayed at the Amex stadium.

Graham Potter then added the signing of Adam Webster for a fee in the region of £20million. He may have only played in a handful of matches for the Seagulls but his ability is abundantly clear. It won’t be long before they’re fielding £40million bids for the 24-year-old.

But perhaps Brighton’s most valuable centre-back isn’t even turning out for the club. Ben White, nicknamed the ‘White Wall’ by The Athletic’s Phil Hay, is believed to be a target for Liverpool and Manchester United having impressed while on loan with Leeds United this term.

Prior to this campaign, White had League Two experience with Newport County and 15 appearances in League One from his time on loan with Peterborough United. He was untried and untested in the Championship yet Marcelo Bielsa had plans to make him a key part of his promotion push.

The report reveals White first believed he wouldn’t be able to cope with the physical and intense demands Bielsa places on his players. Under such pressure, players can crumble. Others, however, turn into diamonds. White thought he’d flounder but instead has flourished at Elland Road.

The 22-year-old has been exceptional in the Championship, with Leeds conceding just nine goals in 16 games so far. Over the course of the season that equates to just over 25 goals. For a little more context, Bielsa’s men conceded 50 last season.

Of course, this turnaround isn’t solely down to White but his calm, assured presence in the defensive third has definitely helped.

Leeds wanted a clause in his loan deal which would allow them to secure his services on a permanent deal. Brighton, wisely, refused. With top-six clubs taking an interest in him, the Seagulls could be set for a big payday if they do decide to part ways with the former Southampton academy player.

It is rare to see top sides making moves for players without any Premier League experience but it is happening a little more often than it used to. United parted with around £15million to sign Daniel James during the summer window and he’s been one of Ole Gunnar Solskjær’s best players this term.

If truth be told, James was a lot more unpolished than White. The United winger was primarily about sheer pace for Swansea. His finishing was erratic, his final ball was often lacking but those are things that can be improved. So the Red Devils gambled on Wales star and, so far, it is paying off. The Leeds defender has a lot more going for him.

Though he can be rash on occasion and does go to ground perhaps a little too easily, there are lots of positives to take from the 22-year-old’s performances. White ticks plenty of the boxes for a modern-day centre-back: he’s positive on the ball and pro-active when not in possession.

He doesn’t look to just bully opponents in isolated incidents, instead, he attempts to dominate the space in general. He’s then able to suffocate the opposition, reclaim the ball and quell attacks almost instantly due to his positioning. 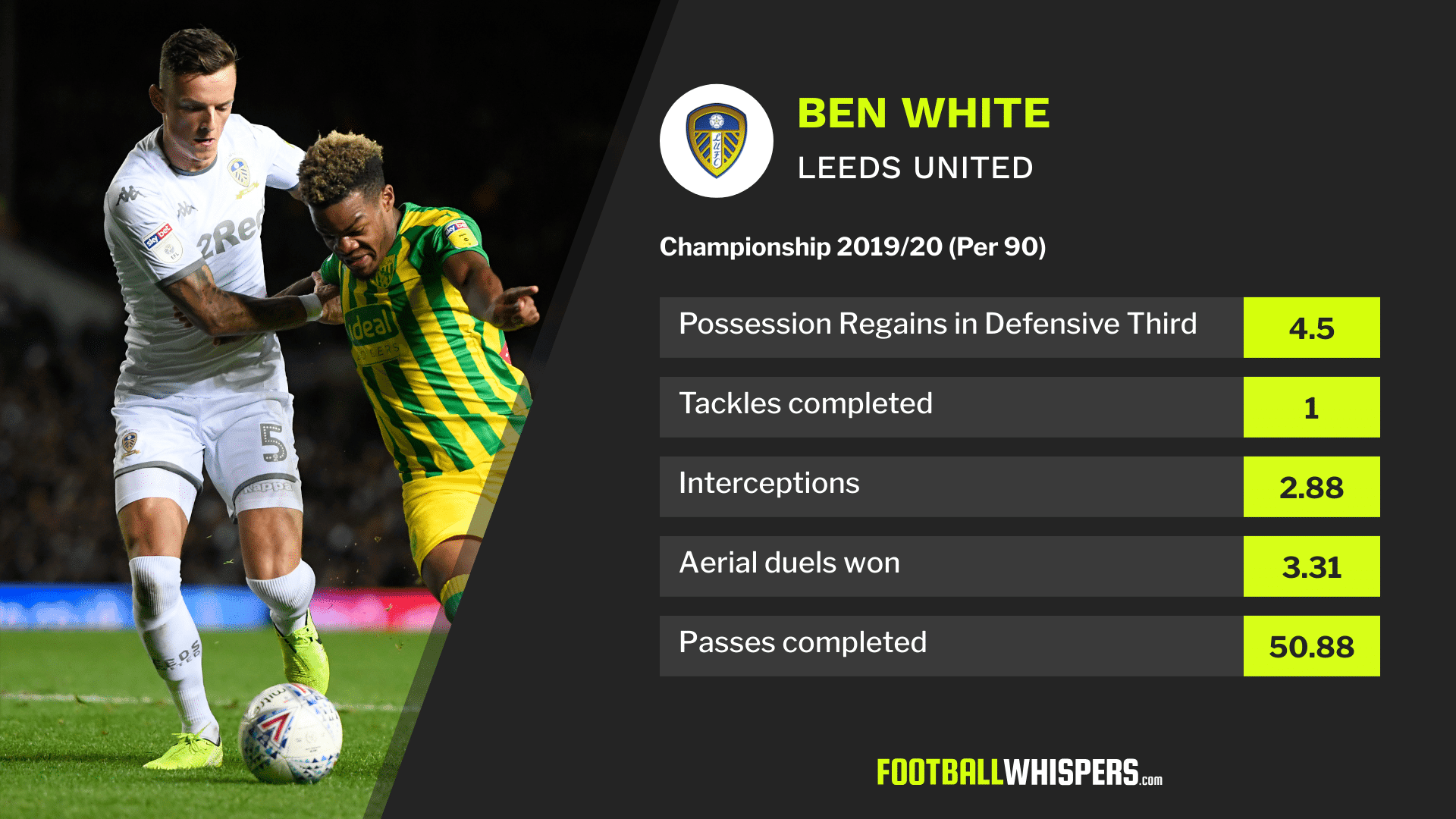 So far this term, White has averaged 2.88 interceptions and one tackle on a per 90 basis. He’s dribbled past, on average, on fewer than one occasion per 90, too. Furthermore, he’s regaining possession in the middle third on close to three occasions per 90 and this figure rises to 4.5 for possession regains in the defensive third. The right-footer also dominates in the air, too, winning over 50 per cent of his aerial duels.

You can tell why Phil Hay calls him a wall.

But White has much more to his game than just what he brings to the defensive side of things. Like the very best defenders in the world, the Brighton loanee excels when on the ball.

He’s attempting on average 60 passes per 90 and he completes 86 per cent of them. Of those 60, he’s playing close to 36 per cent of them forward and finds a team-mate with near 50 per cent of the long balls he attempts. The big switch to the left-wing area is a favourite pass of his and he’s unnervingly precise with it.

He’s press-resistant, too. While he doesn’t dribble his way out of situations, he shows great composure to find a team-mate when under pressure. It’s a valuable trait to have. White is also versatile. Primarily a right-sided centre-back, he can also fill in at right-back which suggests he’d also be comfortable in a back three.

White fits the profile for a number of top teams. If his performances carry on throughout the campaign Brighton will be able to name their price for the highly-rated Englishman.

And it can’t be long until Gareth Southgate starts to keep tabs on him with a centre-back position for the Three Lions potentially up for grabs.