Brighton & Hove Albion spent more than £20million on centre-halves in the summer, but their best defender could be on loan at Leeds United.

Ben White joined the Yorkshire outfit on a season-long loan deal after spending the second half of 2018/19 on loan at Peterborough United.

Despite parting with £18million to sign Adam Webster from Bristol City and £3.5million for Portsmouth‘s Matt Clarke, promptly loaning him to Derby County, White remains front and centre of Graham Potter's long-term thinking.

That is, of course, if the 22-year-old is even a Brighton player beyond the end of the season. White has shone for Marcelo Bielsa's side – no mean feat given the eccentric Argentine's famously high demands of his players – and the vultures are circling.

That's nothing new for White. Before putting pen-to-paper on a long-term deal in April 2018, he was linked with Tottenham Hotspur. Now his list of suitors has grown to include Liverpool, Chelsea, Manchester United, Wolverhampton Wanderers and, most recently, Leicester City.

The Foxes, doubtless in anticipation of interest in Caglar Soyuncu, are keen to bring White to the King Power Stadium this summer, according to Football Insider.

“There is all sorts of talk, as we know,” Brighton boss Potter said in December.

“But the reality of it is that he is our player and he has got a future with us and we are looking forward to having him back at the right time and go from there.

“He is a player we like a lot. If you see how he plays, the attributes he has fit us.”

Potter is right to be excited about White. What will have impressed the Brighton boss most about his young charge this season is his passing. White ranks eighth in the Championship among central defenders for passes attempted with 58.06 (per 90) and fifth for completions (49.5 per 90).

Given Potter's remit was to transform the Seagulls from a direct, defence-first team under Chris Hughton to a more varied, possession-focused side, that metric will be of particular interest and is doubtless a big part of the reason White was loaned to Leeds United in the first place. 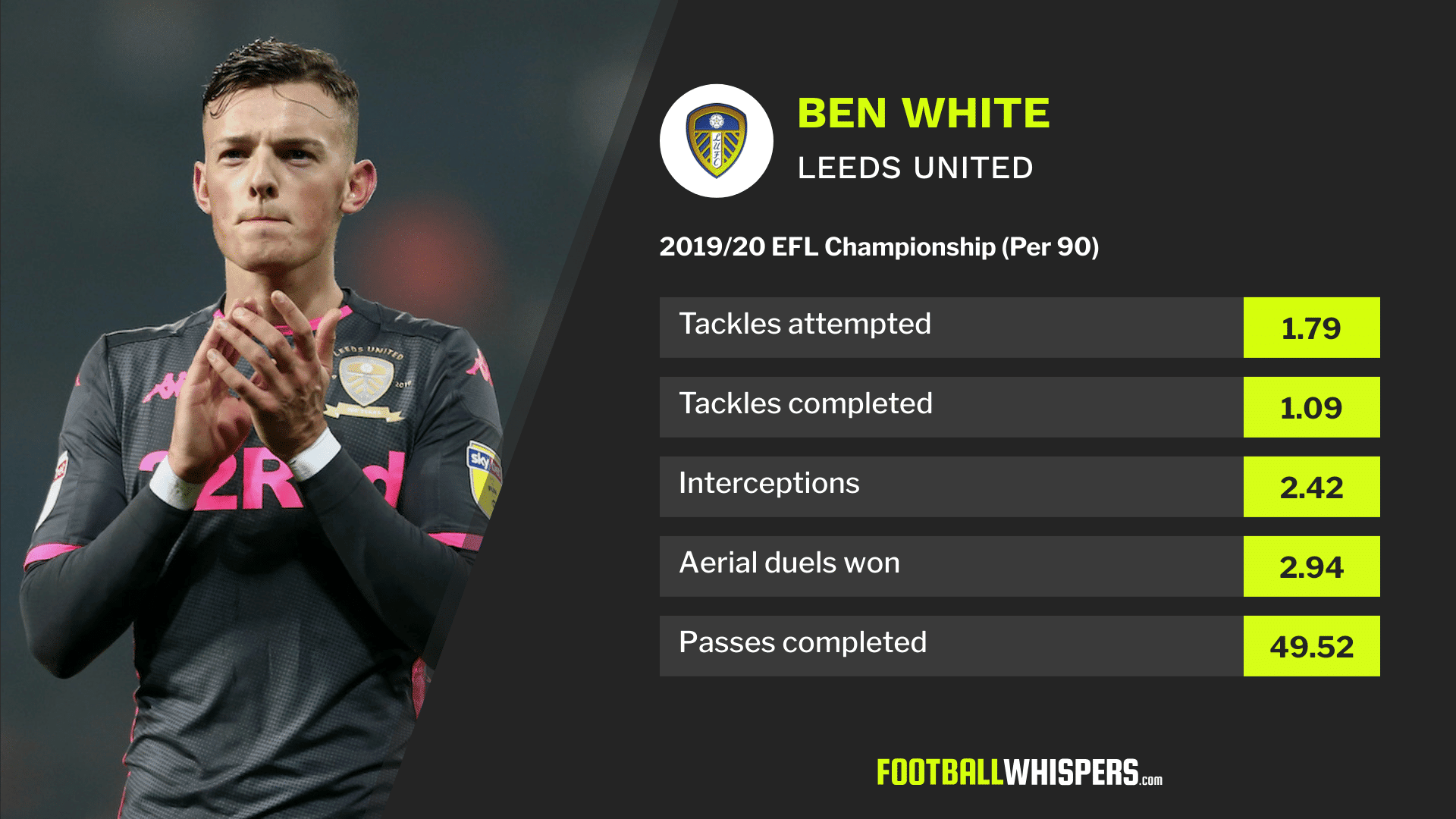 At Leeds, White will have been subjected to the very specific tactical whims of Bielsa – a coach who is infamously reticent to use loan players until they have grasped the nuances of his plan. No-one in the Championship has a higher possession average than Leeds (65.04 per cent) while the White are second for atttemoted (503.59) and completed (405.28) passes, making Elland Road the perfect proofing ground.

The fact he has done so well in the Championship, in what is his first year in England's second tier, bodes well.

David Weir, Brighton’s loans manager, told The Athletic: “You could argue that he could play for Brighton now. He has got better and better, and has done better than anyone could have expected.

“He’s right up there in terms of the top defenders in the Championship. We’re all thrilled by how he is doing and the progression he has made. He’s a great example of a loan programme working well.”

There should even be a spot ready and waiting for White at the Amex Stadium this summer. Albion skipper Lewis Dunk was linked with a £50million offer from Chelsea during the January transfer window. With the Blues expected to spend following the end of their registration ban, they could test Brighton's resolve.

Potter would be reluctant to lose his captain, but less concerned about his long-term partner Shane Duffy moving on. The 28-year-old Republic of Ireland international has gradually been phased out this season, making just ten Premier League starts.

A muck-and-nettles type of defender who's best employed as a stopper, but is rather less at ease progressing play, the former Everton youngster has found himself behind summer signing Webster this season. If Potter can nail down a long-term left-back, Dan Burn should be freed up to play in his natural position at the heart of defence too, putting further scrutiny on Duffy.

As well as being an adept passer of the ball, White has proven himself an accomplished defender on his rapid ascent to the Championship. His 2.42 interceptions (per 90) not only rank third among central defenders in the division but speak for his impeccable reading of the game.

With 6.06 successful defensive duels (per 90), White has an overall success rate of more than 60 per cent and wins 1.09 of 1.78 attempted tackles (per 90). He is strong, quick, alert and aggressive – all the attributes required of a modern defender.

There is an irony in the fact White probably wouldn't look out of place in Brighton's backline at present. But if the Seagulls are relegated, you can be sure he will stay in the Premier League without them.