It was always a case of when rather than if Ben Godfrey would reach the Premier League. The only surprise is he's made it with Norwich City – though he might not be on the books at Carrow Road much longer.

The 21-year-old was linked with Manchester United and Liverpool while helping the Canaries lift the Championship title last term. An ever-present in the heart of defence after four games, Godfrey is reportedly a Tottenham Hotspur transfer target.

According to the Daily Mail, Spurs had been interested in the muscular centre-back-cum-midfielder this summer. However, Godfrey remained with Norwich and penned a five-year contract extension.

But that hasn't put the North Londoners off and, according to reports, they will reignite their interest in the England Under-21 defender next year.

Given their proud record of buying British and Irish talent – think Ryan Sessegnon, Gareth Bale, Kyle Walker, Michael Dawson, Aaron Lennon and a host of others – it's a deal which fits Spurs' ethos nicely.

What makes Godfrey's rise particularly impressive is the fact centre-back is a relatively new position for him. A striker in his formative years, the defender idolised Arsenal legend Thierry Henry.

“My footballing hero is actually Thierry Henry, although I don't score that many goals,” he told Norwich's YouTube channel.

“I was a striker when I was a kid, up until about the age of 11 or 12. I liked his style of play and stuff like that and he obviously got plenty of goals.”

It was in midfield for League Two York City that Godfrey made his debut, clocking up 15 appearances in all competitions for the Minstermen in 2015/16 before rejecting their offer of a professional contract in favour of signing for Norwich.

The Canaries were a Premier League club at the time and although he made two Championship appearances during the 2016/17 season, Godfrey's loan spell with Shrewsbury Town in 2017/18 proved his making.

“He can use the ball as well. He’s a player you can trust on the ball in midfield,” Norwich team-mate Carlton Morris told the Shropshire Star while the pair were on loan at Shrewsbury. “Especially if teams are pressing up on us where he doesn’t have much time.” 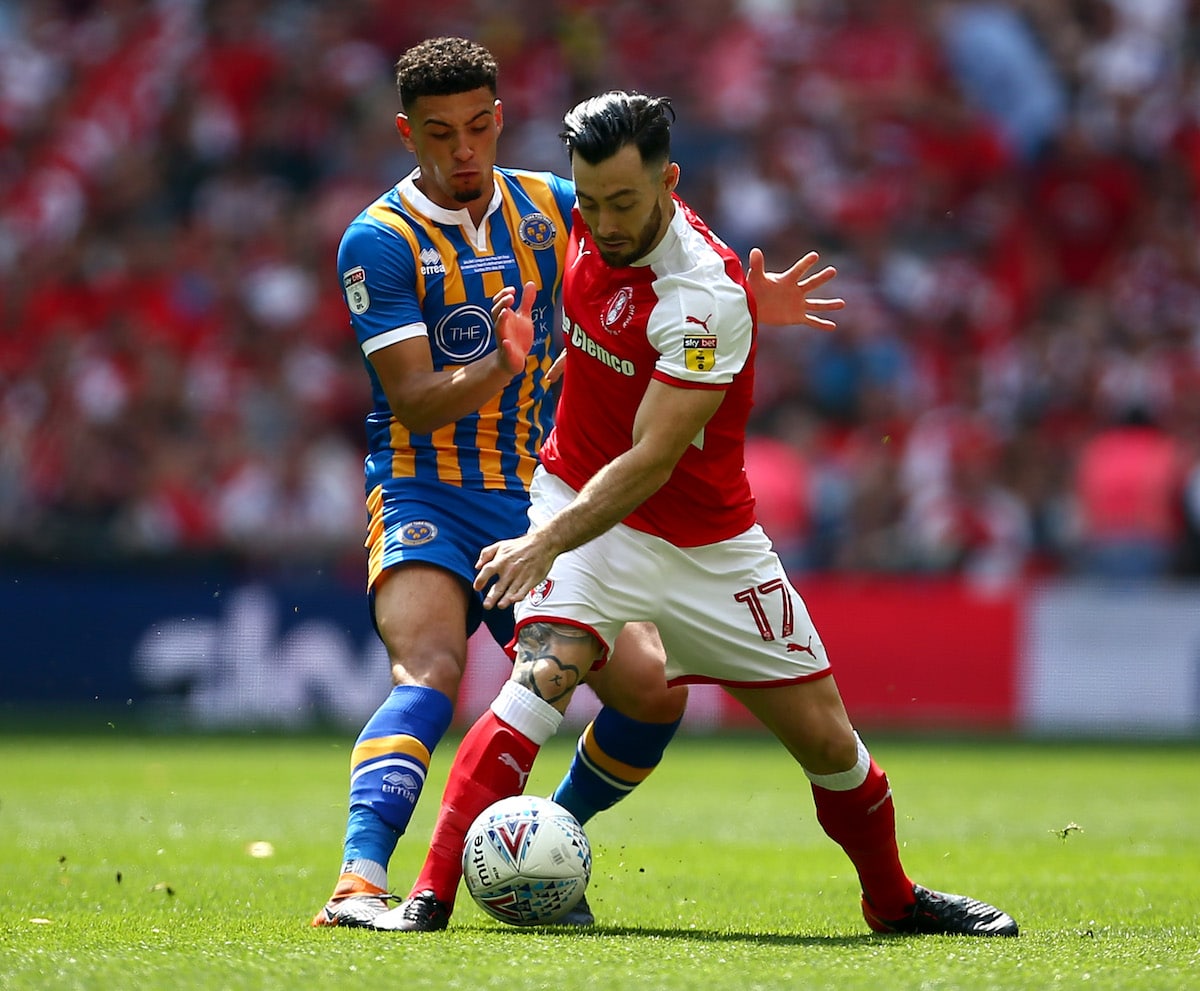 Having impressed in the first half of the season, Godfrey's loan spell was extended until the end of the campaign and he finished with 51 appearances for the Salopians as they suffered heartbreak in the League One play-off final at the hands of Rotherham United.

“I think it has benefitted me mentally to go through what I went through last year,” he said of the experience. “It was a good year but obviously didn’t end the way I wanted it to.”

Having shone for Paul Hurst's side, Godfrey returned to Carrow Road last summer to compete for a spot first-team spot at Norwich. What he might not have expected was to be juking it out to start at centre-back. But Canaries boss Daniel Farke saw the requisite qualities in the youngster to play further back.

“We have had an honest chat about this and Ben is totally aware of my plans and my thoughts,” Farke told The Pink'Un. “To play in midfield at a lower level helps you to improve your performance in defence because he knows what type of passes those holding midfielders need.

“Look at many world-class centre backs, they nearly all started in central midfield. (Gerard) Piqué in Spain, (Mats) Hummels and (Jérôme) Boateng in Germany, even in England with Rio Ferdinand at the very start.

“I have the feeling when he gets used to this position and can have more games to learn the decision-making in the last row because it is different, he has all the ingredients to be an outstanding centre back, world-class.

“He can have a great, great career. Maybe in the holding midfielder he can be a good Championship player, maybe higher, but I see him in training and in the cup games and pre-season and I see his mid to long term future in that position.” 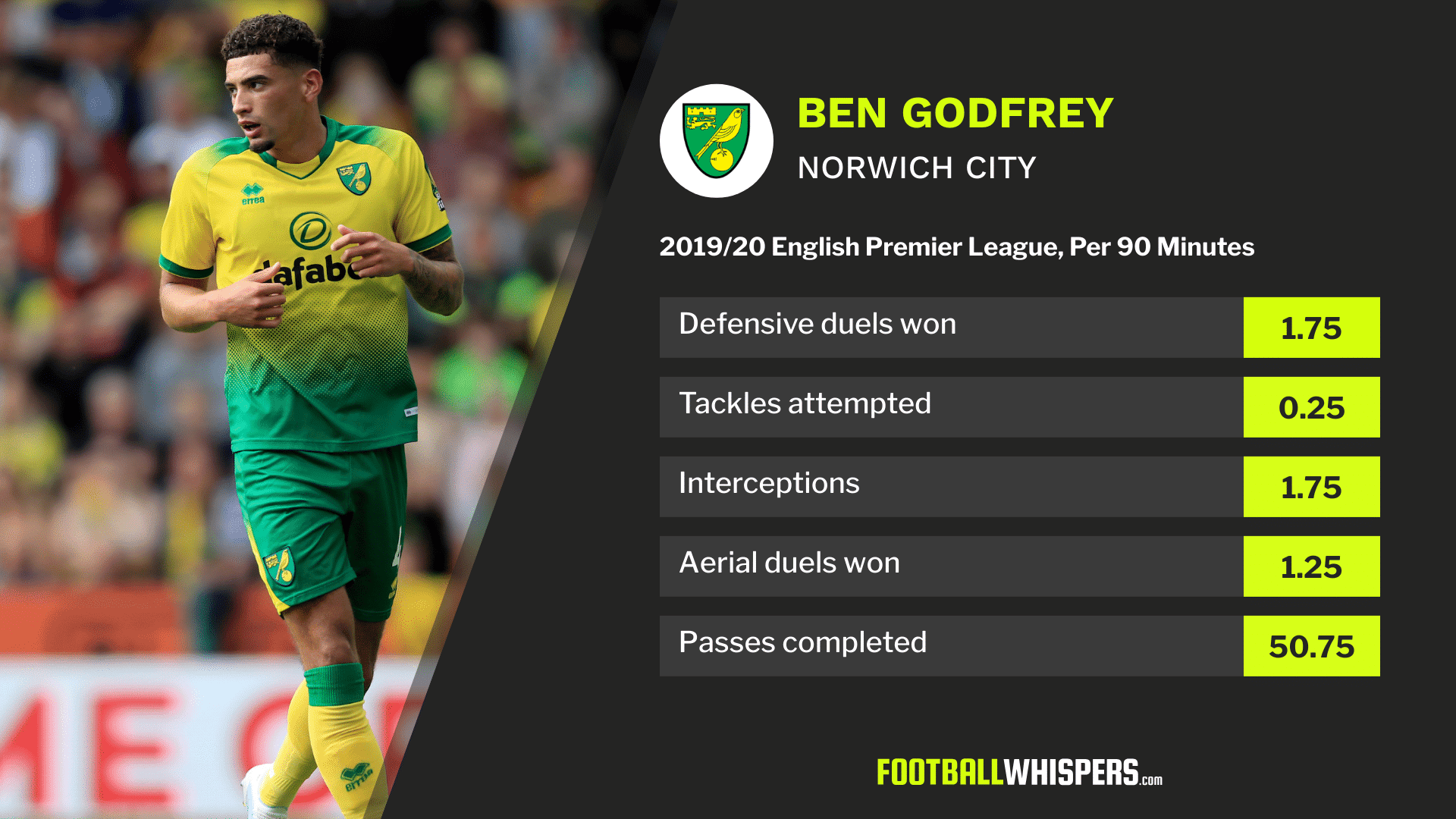 Deceptively quick given his strapping frame – thanks in no small part, one imagines, to the fact his father Alex played rugby league – as well as being comfortable on the ball and tactically astute, the switch paid rich dividends.
In terms of his ball use, Godfrey attempted the eighth-most passes per 90 for a Championship defender last term (60.53) and completed the fifth most (52.93). That particular trait has drawn parallels with former Manchester United and England defender Ferdinand.
And if Godfrey wishes to seek out any advice of how to excel as a ball-playing defender at Premier League level, he need only pick up the phone to the six-time Premier League winner who is an advisor to New Era Global Sports management company. He's even been labelled ‘the new Rio Ferdinand' by Canaries fans.
“He's open for us young boys in the agency to speak to him any time,” Godfrey the Daily Mail. “He's been massive.
“How much better can it get than speaking to a person like Rio Ferdinand? With what he's experienced, the career he's had and his knowledge of the game, it's been massive for me.

“I'll continue speaking to him. He's a great guy and been a massive help.”

For now, though, Godfrey will focus on helping the Canaries defy the odds. Only two Premier League defenders – Wolves‘ Conor Coady and Brighton‘s Lewis Dunk – have more possession regains in the defensive third than Godfrey's 6.25 per 90.

And what of Farke, who tipped the now England Under-21 international to star in a deeper position? You suspect some managers would be shouting about this success from the rooftops – not the German.

“Yes, deep inside it is pleasing that I was not wrong with my judgement, but all credit goes to Ben,” Farke told the Eastern Daily Press last season. “It was a big transition for him to accept that he plays in a different role and to change his game management slightly.

“He had to wait a few months until there was a chance to shine in this role but since he came in he has been outstanding.”