For a few years now, Ben Gibson has been tipped as a potential English defensive star of the future.

He was subject of Chelsea transfer rumours back in January, but stayed at Middlesbrough in their unsuccessful battle against relegation from the Premier League.

But with Boro now a Championship club, there has been much talk about the 24-year-old returning to the Premier League this summer with Leicester City, West Bromwich Albion and now Manchester City keen.

According to the Independent, Gibson is a Manchester City transfer target should they fail to land Jonny Evans from the Baggies.

City boss Pep Guardiola is clearly keen to sign a centre-back having switched to a 3-4-2-1 system this season. At present, that relies on Vincent Kompany remaining fit and leaves John Stones, Nicolás Otamendi and the out-of-favour Eliaquim Managala as the only senior centre-back options.

Could Gibson make the step up?

A product of Middlesbrough's youth system, Gibson is also the son of the club’s president, Steve Gibson.

And former boss Aitor Karanka was a massive fan. “I need to be careful,” he joked back in January. Because if I improve him a lot then I might lose him!”

“He can get to the very top, he can be there. If you look at the national team, the central defenders are Gary Cahill, John Stones and Phil Jagielka – Cahill is 31, Jagielka is 35.

“There is Chris Smalling and Michael Keane – you can’t find a lot of young central defenders.

“So for sure, he can become a national team player. He can be a top team central defender, if he keeps doing the same things.

“But if he thinks he is in the international team already or playing for a top club, or thinks he is as good as people say he is, it can make a big mistake.

“To play in the top teams is about hard work.”

While the former Middlesbrough boss spoke about him staying at the Riverside Stadium for 15 years, he knew it was unlikely.

Gibson, who made his league debut in 2011, getting 49 minutes in a 2-1 win over Coventry City, has played more than 150 games for his hometown club, but will surely have to move on now if he wants to progress.

Ready for the step up?

Is the Middlesbrough centre-back worthy of making the move to a club challenging for the Premier League?

It’s one thing to play for a club like Boro but they had to defend a lot more last season than anyone at the top of the league does.

They will see less of the ball and the chance of making mistakes is much higher.

At City, the pressure is different, the slightest mistake and you are all over the back pages and your title or Champions League chances are blown away.

Against Leicester City last term, although a drab, turgid affair, he showed how he can defend well against pace, despite not being the fastest himself.

You can see from the images below, where he is up against Ahmed Musa.

The Nigerian knows he has the pace to beat his marker, but so does Gibson.

He holds off, keeps his ground and as soon as the Leicester forward makes his move, Gibson steps in, using his strength to stop the attack.

Playing against Manchester United at Old Trafford, he showed that he can win those physical battles against the bigger, more dangerous opponents. 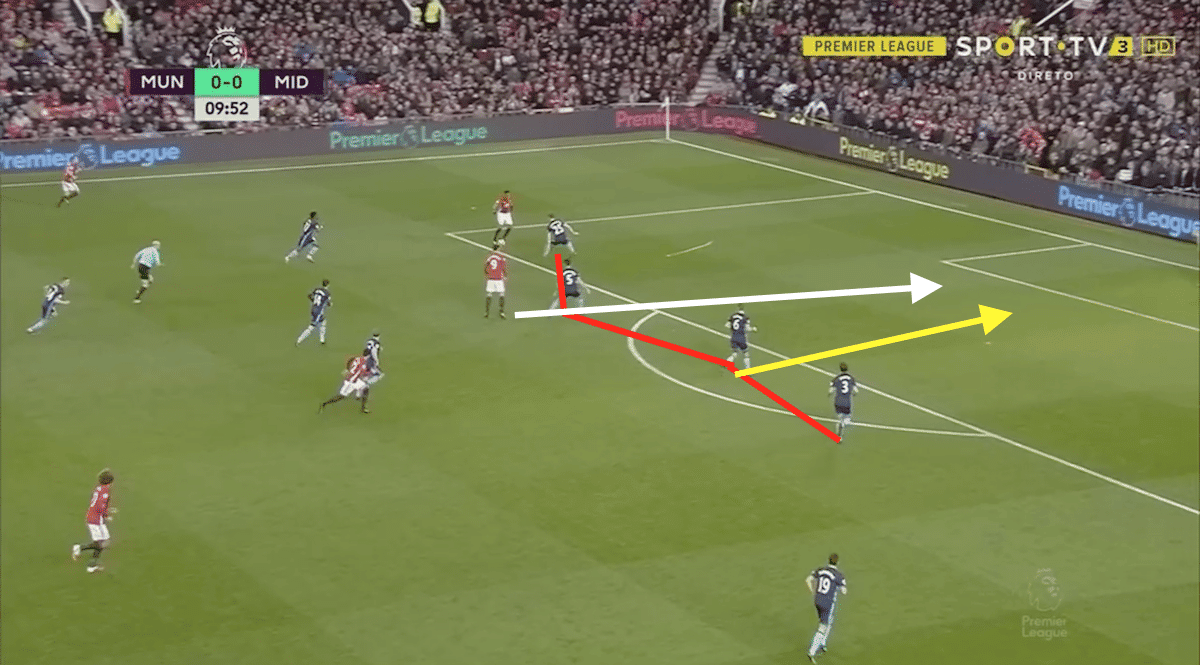 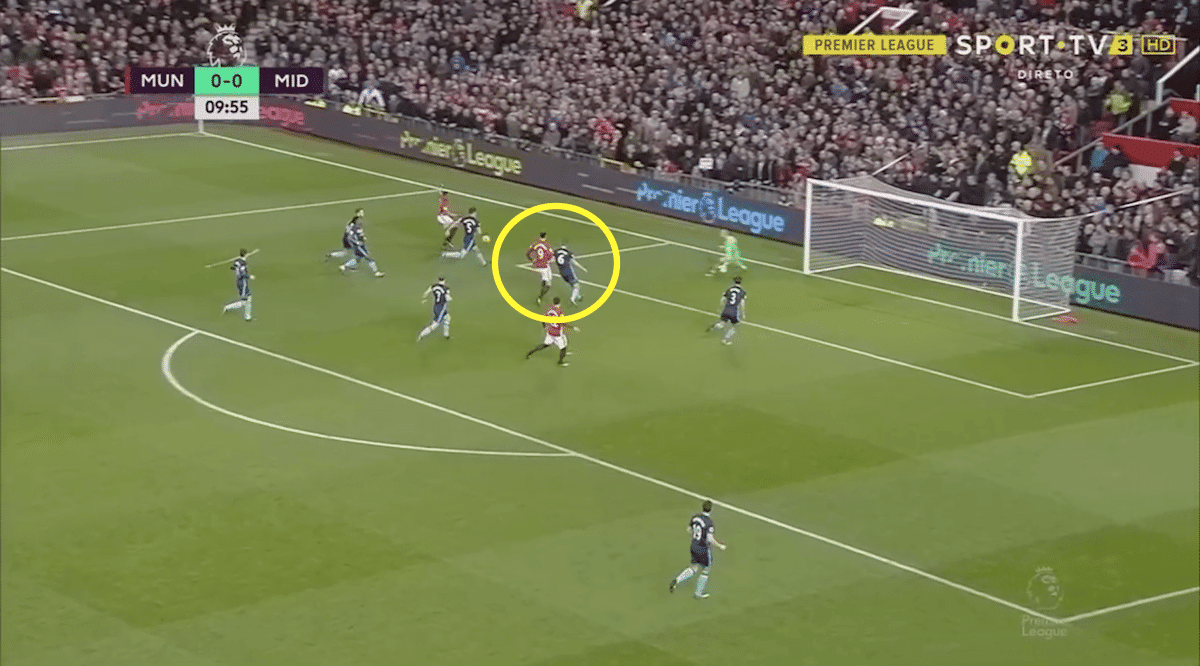 The Boro defence is well organised: and as Bernardo covers at the near post, Gibson comes across to track Zlatan Ibrahimović, which is always a daunting task.

However, he matches up well against the Swede, stands his ground and gets in front to clear the danger. 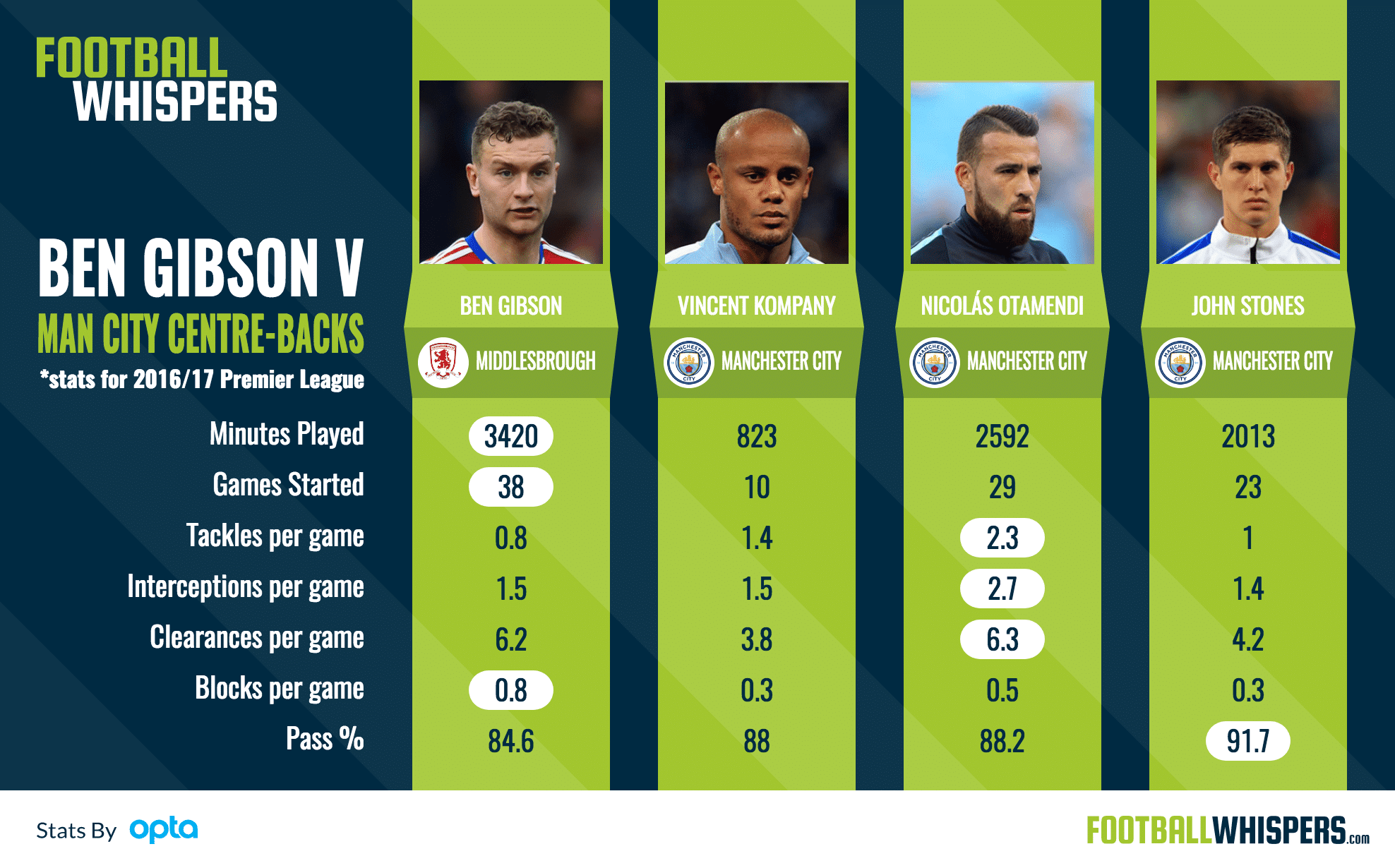 Despite their relegation, Middlesbrough conceded just 53 goals last term – largely thanks to Karanka's restrictive setup – which gave them a better defensive record than every other team in the bottom half.

Gibson was a big part of that. The North East native made more blocks per game than any of City's main three central defenders – Kompany, Otamendi and Stones – last term with 0.8 per game.

He was only just behind Otamendi, who made the most starts for Guardiola, for clearances per game too (6.2). One area where he did find himself comfortably second best was tackles per game.

An average of 0.8 put him well behind the Argentine who posted 2.3 per game. But that can be attributed to Boro's passive defensive style which saw the backline stand out and attempt to pick off interceptions instead of engaging and pressing aggressively.

At 24 he still has time to iron out any creases in his game and, given the black marks against Otamendi, Kompany and Stones, he would be a welcome and adequate option.

Guardiola has already shown his faith in young English centre-halves by signing Stones. If he has not been burned by the experience, Gibson would be an excellent addition.