Despite the odd slip up, Tottenham Hotspur have started the 2017/18 season impressively. Mauricio Pochettino’s side are once again performing well and several of their star names are attracting admiring glances from Europe’s superpowers.

New arrivals have complemented the existing group, Harry Kane continues his remarkable rise, Christian Eriksen remains under the radar as one of the best players in the league and the central defence is still looking strong. Even Moussa Sissoko has scored.

The club are also now providing the core of the England team. Kane captains the side, Alli supports him, Eric Dier anchors the midfield,and Kieran Trippier could challenge former Spurs man Kyle Walker for the right full/wing back position over the coming months.

And Harry Winks’ simple but effective display against Lithuania, where he completed more passes than any other player including 100% long pass accuracy, is likely to earn him a place on the plane to Russia next summer, and possibly a starting spot.

New centre backs Davinson Sanchez and Juan Foyth look to be shrewd acquisitions, while the club still have Son Heung-min and Fernando Llorente waiting to make their mark on the campaign.

But one player is their unlikely star at the start of this season, and leads the side in some areas that may surprise a few onlookers.

Ben Davies suffered the disappointment of seeing his national team’s World Cup hopes destroyed following a 1-0 defeat against Ireland in Cardiff this week.

But despite this kick in the teeth on the international scene, Davies can take solace in the fact that his club form has seen him become one of the best players in the league in his position.

According to WhoScored’s player ratings he is Spurs’ second best performer so far this season, just behind Kane and just ahead of Eriksen.

The raw data also paints a complementary picture when it comes to the 24-year-old’s performances, especially in attack.

No Tottenham player has completed more than Davies' 2.7 key passes per 90 minutes this season. Eriksen in second place has only managed 2.3. It has resulted in two assists for the former Swansea man this season this season, putting him level with the Dane and behind Trippier’s three.

Davies is also fourth in the side for shots per game, with an average of 1.7, and already has two goals to his name. He’s becoming one of a growing number of full-backs who are comfortable when drifting into the middle of the pitch to support the midfield in the build-up, and attack in the creation and finishing of chances.

In the screenshot below form their match against Chelsea, Davies has nipped inside as the team were building play down the right, spotting the large amount of space in the attacking midfield position down the inside left channel.

He took this opportunity to sprint into midfield away from his marker, and eventually got a decent shot away which led to a corner. 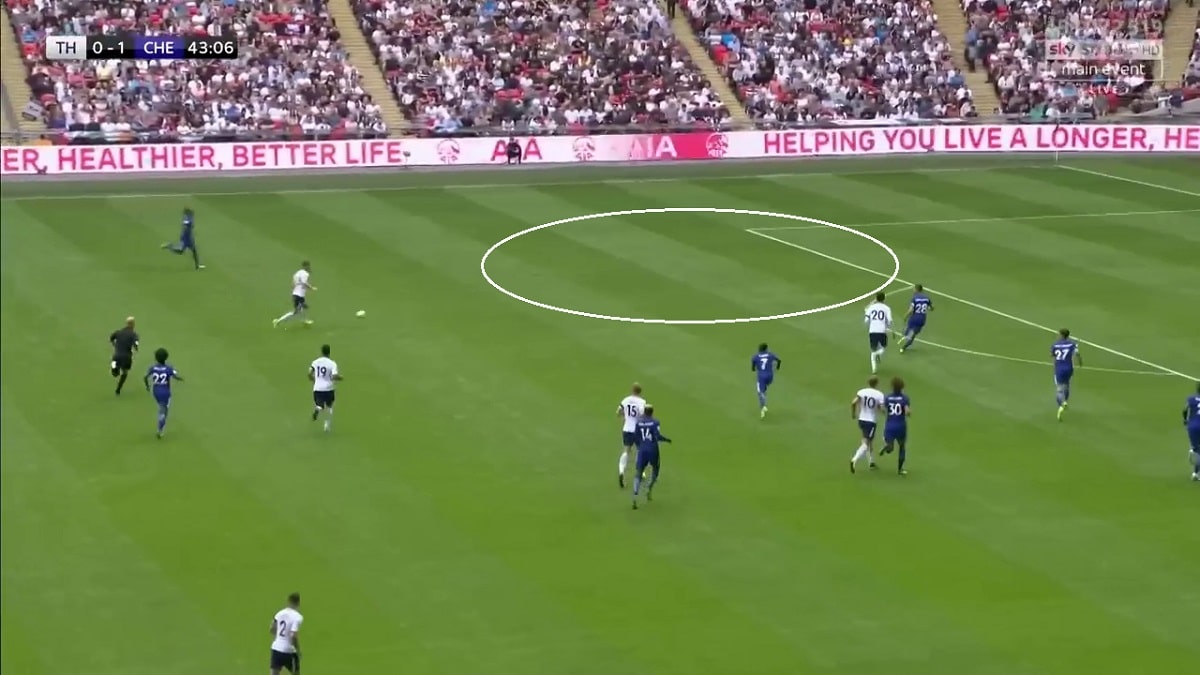 The next image shows him performing another of his duties, providing an option wide on the left and swinging a cross in for Kane to score.

Granted the Everton defence give him a decent sized target into which he can aim the cross, and the striker's run is perfectly timed, but it's still a good ball into the perfect area and leads to a goal for his side. 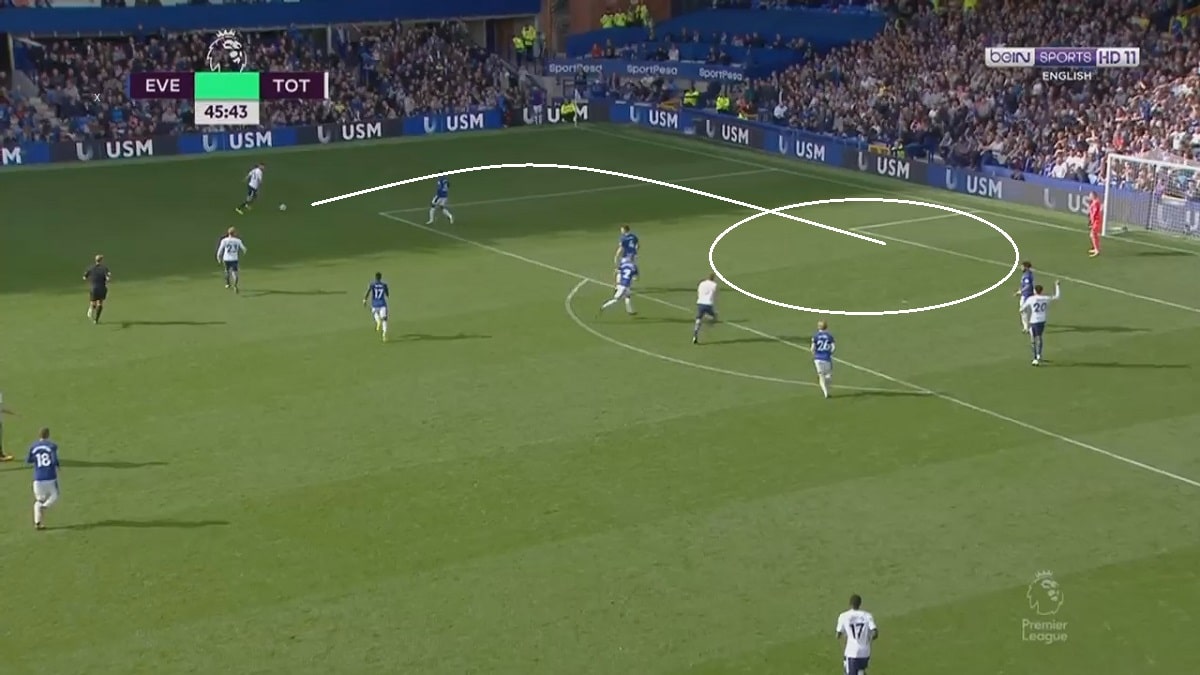 Despite the increased reliance on full backs for many attacking plays, the other side of of their game also needs to be solid, or else they'll find themselves criticised at the earliest opportunity.

In the modern game they almost have to be in two places at once, but this example from Wales' 1-0 win against Austria, where Davies was on the left of a back three, shows his defensive awareness and ability to recover.

As soon as the opposition midfielder has the ball, Davies recognises the attacker trying to get a run on the shoulder of Ashley Williams, who makes the mistake of committing himself too early.

Davies, however, uses his pace to help Williams out and eventually recovers enough ground to win the ball with an important intervention in his own area. 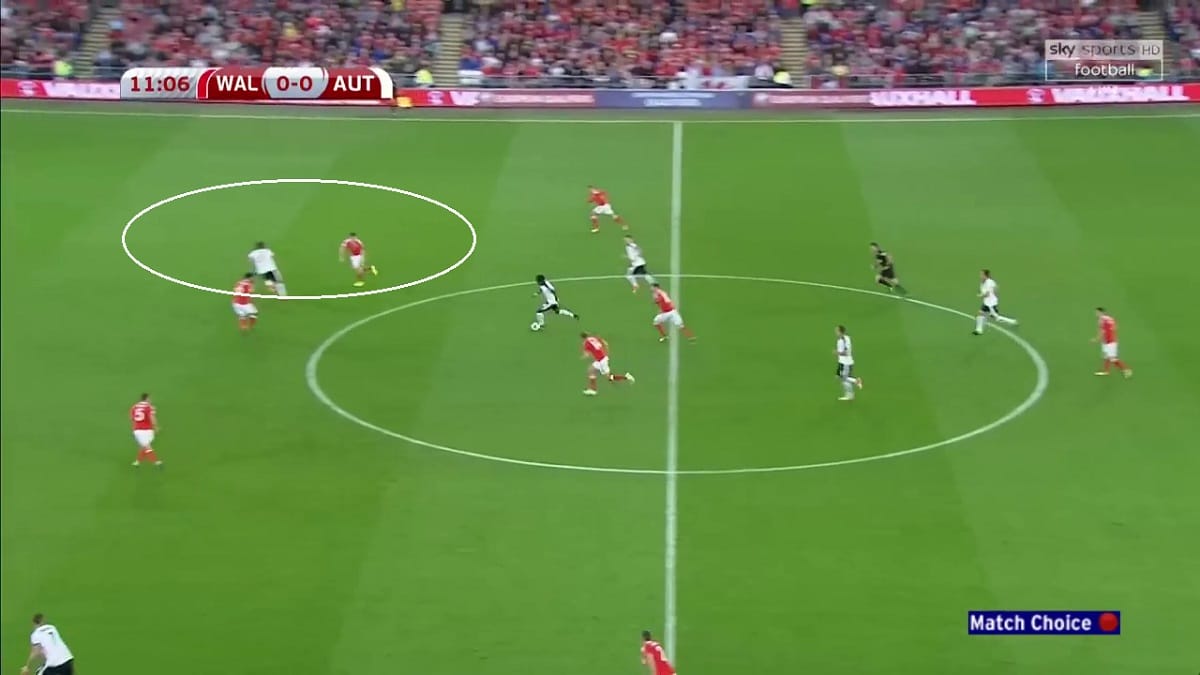 But Davies' place in the side be under threat when Danny Rose returns from injury? It shouldn't be.

In the whole of last season Rose returned two assists, two goals, and 1.4 key passes per game. Davies has equalled or surpassed those figures after just a handful of matches in the new term.

The good thing for Spurs is that Pochettino has options. Should the Englishman leave the club in the January transfer window, they will be more than happy with Davies as the first choice and may look to bring another play in as backup, making a profit thanks to Rose's English premium in the process.

Kane, Ali, Eriksen, and the central defenders may hog much of the limelight when plaudits come the way of the North Londoners, but if Davies maintains this form he'll be up there with the club's and the league's best come the end of the season.