It’s gone under the radar somewhat but England’s squad right now rivals that of the Golden Generation. Gareth Southgate may not have Steven Gerrard or a Frank Lampard in midfield but Sven-Göran Eriksson didn’t have the attacking options currently at the disposal of the Three Lions’ boss.

England hit seven against Montenegro on Thursday night without Raheem Sterling in the squad. Instead, Southgate had to manage with only £100million-rated Jadon Sancho, rumoured Barcelona transfer target Marcus Rashford, Bayern Munich’s former desireable No.1 Callum Hudson-Odoi and Tammy Abraham. Oh, and a certain Harry Kane.

At right-back, Southgate has options with Trent Alexander-Arnold, Kieran Trippier, Aaron Wan-Bissaka and Kyle Walker all vying for that No.2 jersey. It won’t be long before Chelsea youngster Reece James makes that quartet a quintuple.

However, perhaps the biggest takeaway from this England side is that they’ve finally found themselves Ashley Cole’s heir. For many, the former Chelsea defender was the best left-back in the world for a period. He was the most reliable performer of said Golden Generation and since his international exit, the Three Lions have lacked someone of that quality in that area of the pitch.

That isn’t to say England haven’t had good players turning out at left-back. Just none happened to be in the same league as the Arsenal academy graduate. But Ben Chilwell appears to have everything to be this generation’s Cole.

In the 7-0 demolition of Montenegro, the 22-year-old laid on three goals for team-mates. In Leicester City’s 9-0 win over Southampton at the end of October, Chilwell claimed two assists and a goal.

At the time of writing, Chilwell is part of the best defence in the Premier League, at least in terms of fewest goals conceded. He’s one of the most well-rounded full-backs in the English top-flight, perhaps even across Europe.

Liverpool wanted to sign him as a 17-year-old and, if reports are to be believed, he was their top target ahead of Andrew Robertson. During the summer transfer window, a move to champions Manchester City was mooted but he remained at the King Power stadium. However, with Pep Guardiola still not sold on Benjamin Mendy, a big-money move could be on the cards for yet another left-back at the Etihad.

And they aren’t the only ones. Chelsea are reportedly keeping tabs on the full-back with Lampard apparently keen on adding him to his squad of English youngsters. Given Leicester held firm to net £80million for Harry Maguire, Chilwell could well be the first £100million full-back at this rate. He’d probably be worth it, too. 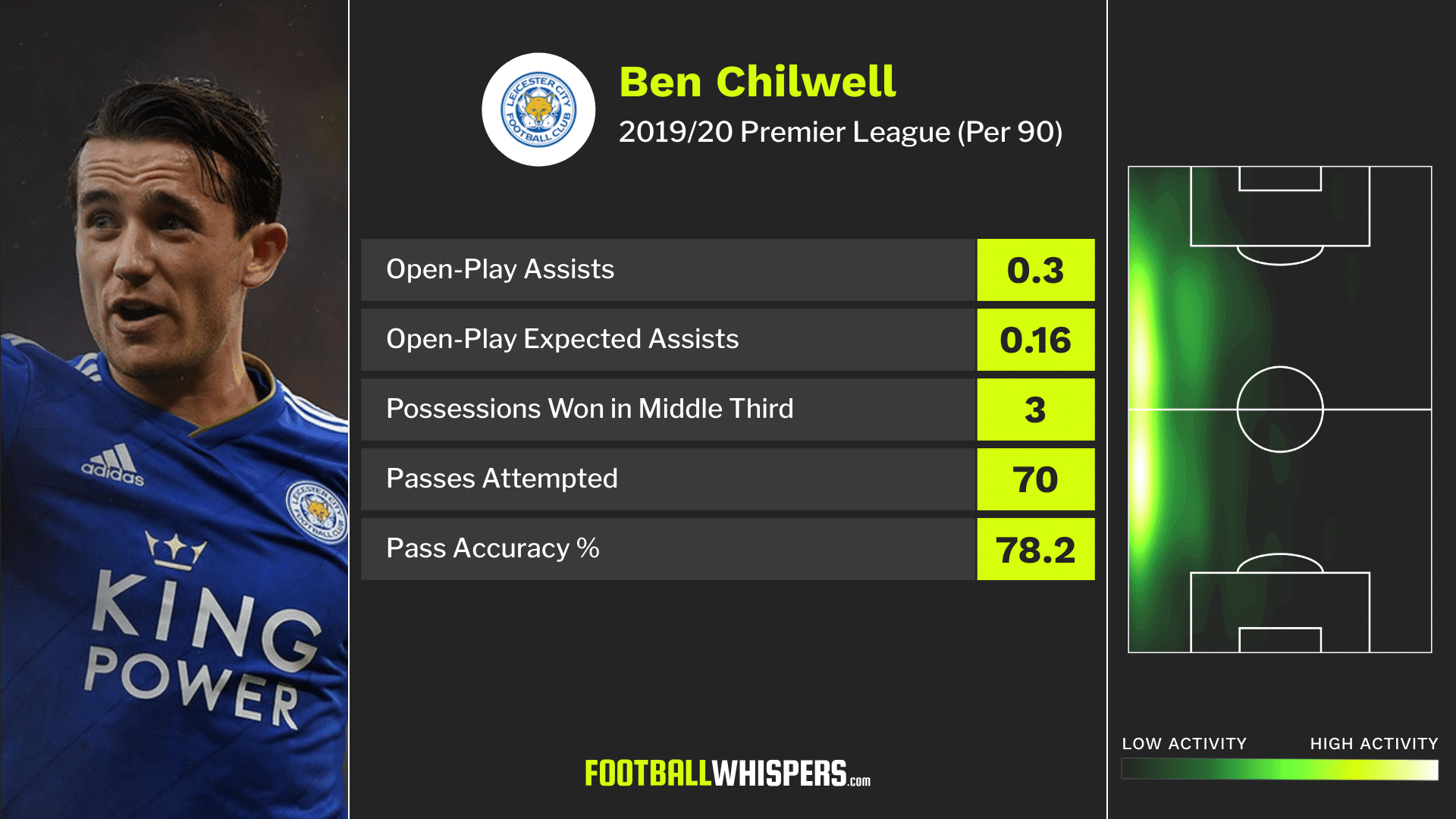 Like all great modern-day full-backs, Chilwell is heavily involved in all aspects of the play. Leicester are attempting, on average, 529 passes per 90. Of those, the Foxes' No.3 is responsible for 70.  Not only is he seeing a lot of the ball, he's also pretty accurate in his use of it.

Full-backs play risky passes in general with crosses not being the type of pass you attempt if you're looking to post a high accuracy percentage. Chilwell plays a lot of long balls into the channels for Jamie Vardy to chase. Those can be easily intercepted. Despite all of this, he's still completing close to 80 per cent of his passes for Leicester in the Premier League this term.

That highlights the fact he can do a job for a dominant team because he isn't wasteful even when tasked with being creative.

Though his heat map paints a picture of an old-school winger hugging the touchline, he's much more than that. Comfortable on the ball, at times he operates in central areas. However, he doesn't just fill the role, Chilwell actually pulls the strings when he's allowed to. 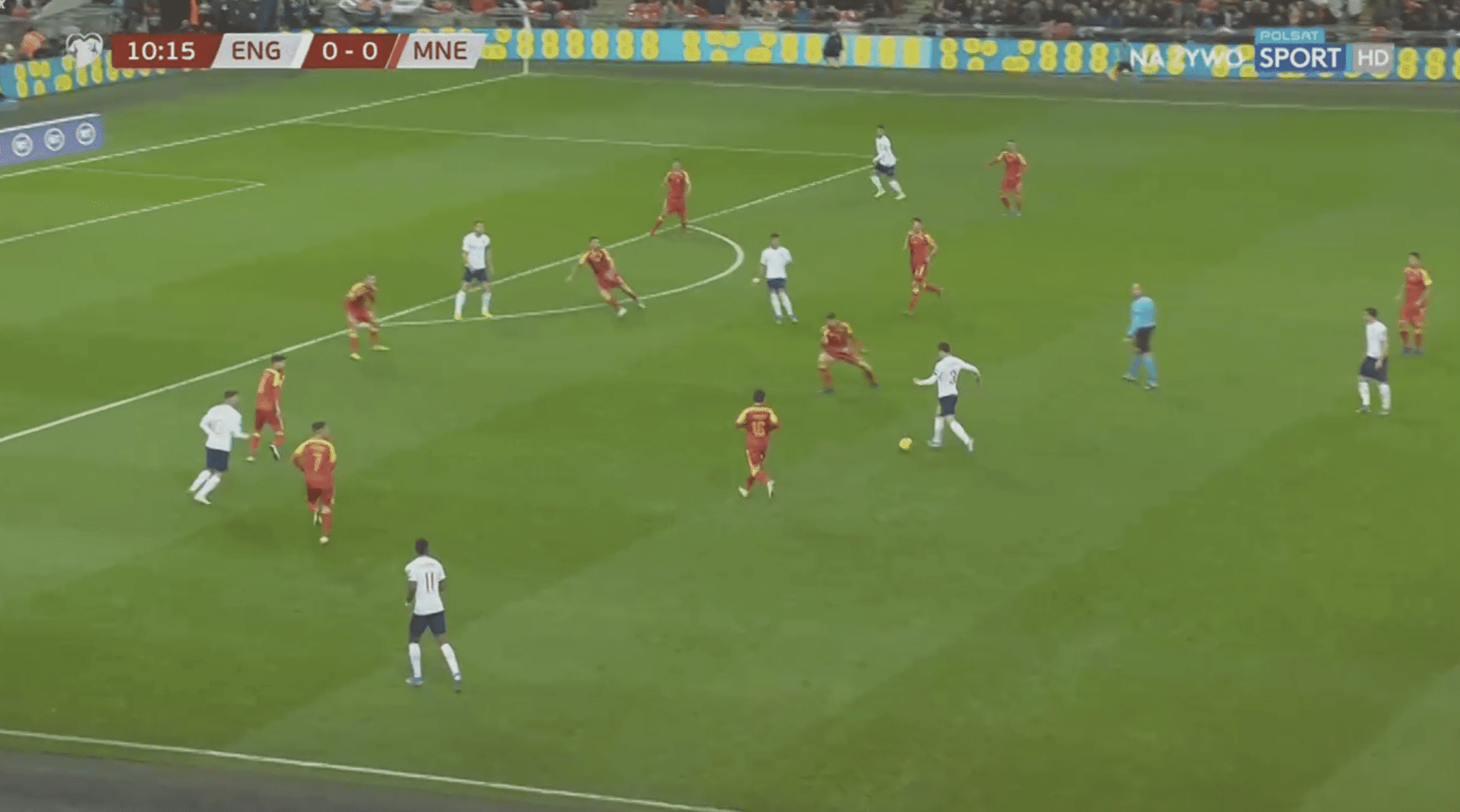 The screenshot above emphasises that point. Montenegro did well to keep England scoreless for the first ten minutes and, as you can see in the image, they kept a lot of bodies back. The away side looked to clog up central areas and cut off passing lanes.

They allowed Chilwell to pick the ball up on the left and drift inside. He's under little to no pressure, with the visitors looking to dominate the space and not the players, but they don't account for the fact the Leicester man has a wand of a left foot.

From a position usually occupied by centre-midfielders, Chilwell delivers a pinpoint pass to Alex Oxlade-Chamberlain. Montenegro go from having nine players behind the ball to scrambling to close down the Liverpool midfielder after his initial first touch in the box. They can't and he's able to lash home into the bottom corner.

This is one of the reasons he's so valuable in the current market. Not only is he dangerous from wide areas and dead balls, but he can also act as a creative hub from central areas if tasked with that job. The scary thing is he's still only 22 and nowhere near his peak. He could change the game for England.