Hatem Ben Arfa can do wonderful things with a football.

So let's take a moment to remember the time he single-handedly eviscerated Bolton Wanderers while at Newcastle United. That turn… we could watch it all day.

Then there was the time he led Blackburn Rovers on a merry chase; professional players becoming a bunch of kids hopelessly trying to retrieve the ball from their uncle in the back garden.

The only way to stop Ben Arfa in full flow is just to kick him. Blackburn should have just kicked him.

Few players can dribble to such devastating effect. Lionel Messi is known more for his unwavering control, the ball glued to his foot as he fizzes past challenge after challenge. Eden Hazard allows his body to just bounce off limbs as he slaloms his way towards the goal.

But there was always an unpredictability to Ben Arfa's movement that set him apart, a shoulder drop here, a rapid stepover there, unleashing a shot with minimum backlift as the defender tried to figure out his next move.

It's a rare ability, to not only keep the ball while running at speed but to drag and pull it in whichever direction you desire. The Frenchman has always had it, and he's certainly not lost it.

The two goals featured above occurred in 2012 and, while much has happened since then, he's still able to capable of bamboozling his opponents.

For example, Ben Arfa produced the below just two months ago.

Yet that skill, the innate ability to weave effortlessly beyond opponents, has not paved the way to a glittering career at the game's pinnacle.

A teenage prodigy at Lyon, his career at Les Gones ended abruptly after he fell out with Sébastien Squillaci. A move to Marseille in 2008 yielded several stunning performances, but further indiscretions tainted his reputation.

Having been linked with Real Madrid at one point, he landed at Newcastle United in 2010.

After a first year ravaged by injury, the 2011/12 campaign produced six goals and many wonderfully twinkle-toed moments. And having featured for France at Euro 2012, he started the following season with a thunderous goal against Aston Villa.

A hamstring injury shattered his momentum, however, and by September 2014 he was allowed to join Hull City on loan. After just six months and nine appearances for the Tigers, he was sent back to St James' Park and Newcastle released him from his contract to join French side Nice.

Of course, due to having already appeared for two clubs that season, he was denied clearance and could not appear for the French side until August. Plunged into despair, he felt like an outsider, saying he would be “ready to go to the north pole just to play football again.”

Having terminated his contract with Nice only to then rejoin in the summer, he played some of the best football of his career. His solo effort against Caen was him at his defence-destroying best, blitzing past three players before ripping a shot into the roof of the net from a tight angle.

The key to his renaissance on the French Riviera was staying fit and finding consistency, starting 33 of Nice's 38 Ligue 1 games and earning a recall to the France team in November.

An evocative speaker, Ben Arfa painted one heck of a picture of his plight at Newcastle. “I had the feeling of being locked in a dark room without a door, or in an endless tunnel,” he told France Football in 2015.

“I saw hell and especially no solution to my problems. At that time, I was wrong, I did not see any light. I was a prisoner.”

That prisoner was freed and unleashed to blistering effect at Nice. Included in the 2015/16 team of the year after a 17-goal haul, Ben Arfa joined Paris Saint-Germain. It was a bitter pill for Nice to swallow; after breathing new life into his career, they watched him join the deep-pocketed dominant force in French football.

Despite scoring on his debut for his hometown club, the Parc des Princes soon became a hellscape for Ben Arfa. Unai Emery and his coaching staff, unimpressed with the player's attitude and physical conditioning, refused to grant him enough first-team opportunities. According to the French media, during one training session, Emery berated Ben Arfa for thinking he could play like Messi.

PSG tried to offload him to Fenerbahce and, when he refused, he was ostracised from the first-team. It descended into a regrettable period of ironic ‘birthday' posts and dressing room banishment.

Luckily, Rennes offered him an escape, and another chance to resuscitate his career. 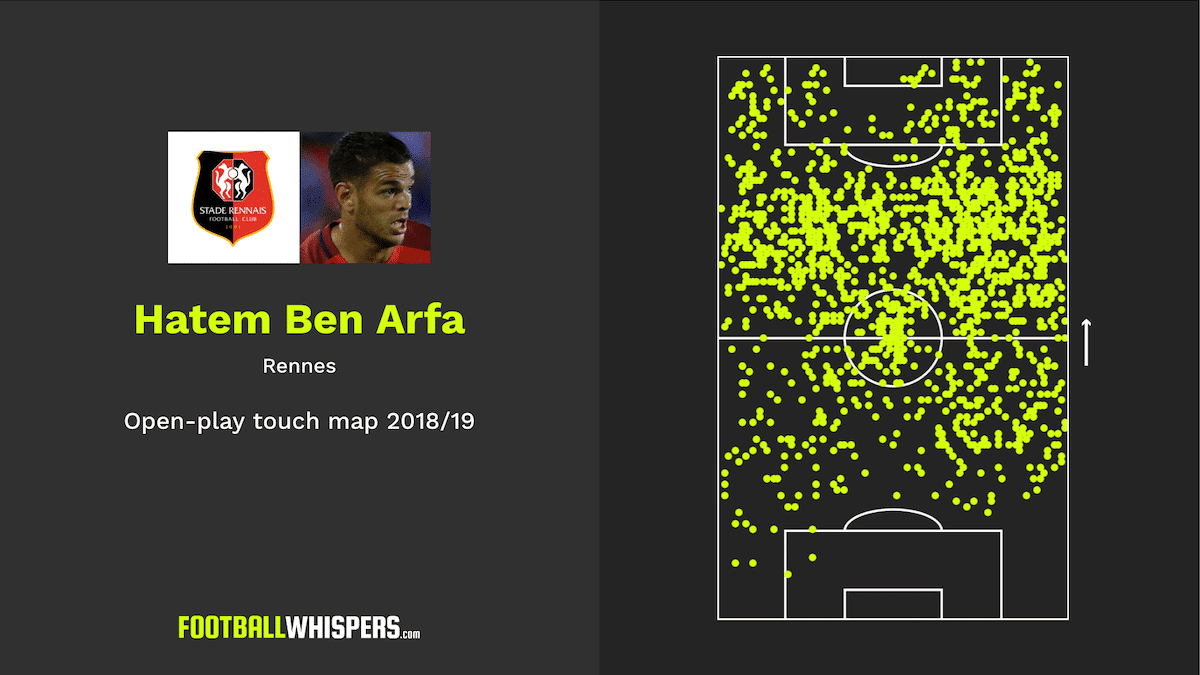 There have been glimpses of his genius – that goal against Angers was a highlight – and it has even brought another piece of silverware in the Coupe de France, in the final of which they beat PSG on penalties, but Ben Arfa has decided to end his time at Les Rouges et Noirs.

He finds himself at a crossroads. Now 32, and having had his fitness issues in the past, one suspects he only has one or two years left, meaning his next move his critical in shaping his legacy.

First, the argument for clubs taking a gamble on him. He is still a matchwinner, with nine goals and six assists to show for the 2018/19 campaign.

He certainly hasn't lost his ability to beat players either; en route to the Coupe de France, he completed 21 dribbles in 390 minutes for a 4.84 per 90 average, leaving everyone else in his wake (he fared even better in Ligue 1 with 5.12). 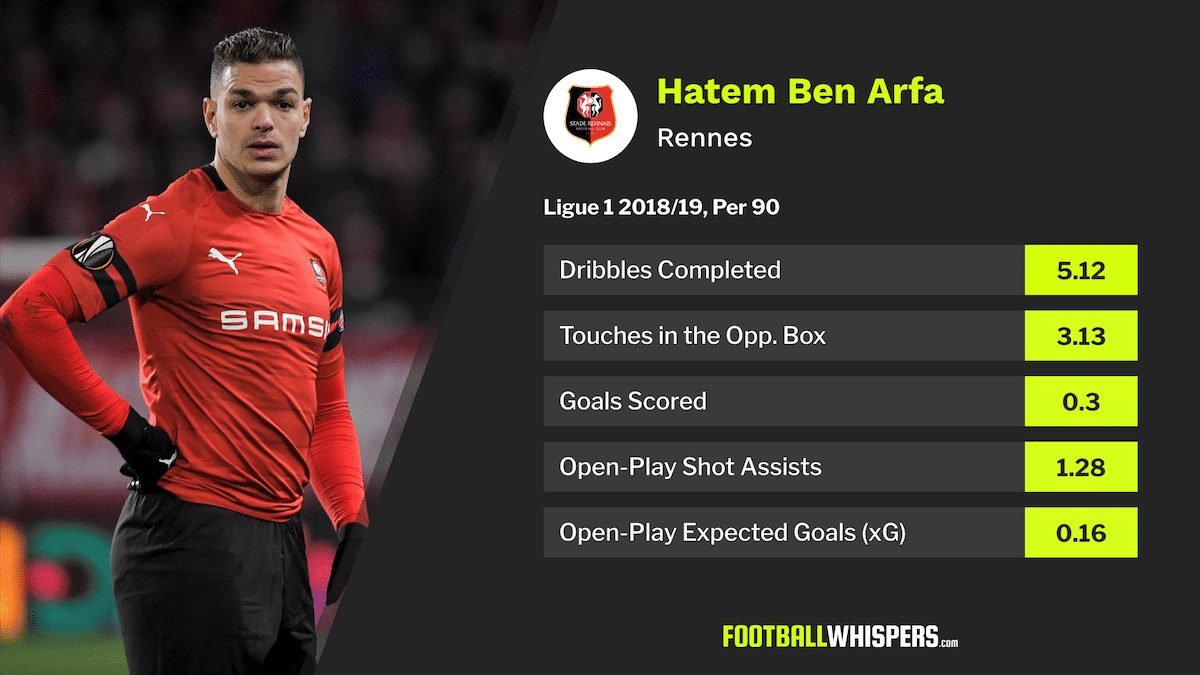 Given his age, clubs can offer him a one-year contract knowing that, if it doesn't work out, he'll soon be off their books. And, as a dynamic, two-footed attacking midfielder, he can operate in any of the three positions behind the striker in a 4-2-3-1.

However, there is an obvious pattern with Ben Arfa. His chequered past, filled with training ground bust-ups and internal disputes, which have reportedly continued at Rennes, has burned a lot of bridges.

He is not a player who would guarantee harmony in the dressing room, so it's perhaps wise for teams in the lower half of the Premier League to avoid him, while it's difficult to imagine Rafa Benítez envisaging a place for him back at Newcastle United.

Sevilla have been mentioned. That would almost certainly be anything but dull given how they have just appointed Julen Lopetegui, the man who has been sacked by both Spain and Real Madrid in the past year, as head coach.

Perhaps there is little to come from Ben Arfa, that he will find a cosy contract in Turkey or Russia and see out his final few years in relative obscurity.

And what a shame that would be. A delightful, hypnotic presence on his day, his behaviour, not talent, has unfortunately shaped his path. But it's not too late to take a right turn; there may be one final chance to leave a club with positive memories.

If not, he'll have to go down as one of modern football's great lost causes.