Belgium knocked out the European Champions Portugal in the last 16 and now they have their sites set on ending the tournament for another of the Euro 2020 favourites. Italy dominated during the group stage but needed extra time to beat Austria and now they face their toughest test of the tournament so far.

Read on for our full match preview and prediction for Belgium vs Italy in the European Championship.

When these two countries last locked horns, at Euro 2016, under 2.5 goals were produced as Italy claimed a 2-0 win. Four of Belgium's last six international matches have witnessed fewer than three goals being scored and we all know how strong that Italian defence is. Roberto Mancini's men finally conceded a goal for the first time in 12 matches during their game against Austria but even then, they kept a clean sheet during the initial 90-minutes.

Four of the 11 meetings between Belgium and Italy have ended in stalemates and we backing the pair to cancel one another out in the opening 90-minutes of Friday's clash. Belgium are unbeaten in their last 13 matches while Italy haven't lost any of their last 31 fixtures, so you can see just why we're backing a draw between the pair.

Italy have won three of their last four encounters with Belgium, beating the Red Devils in the group stage of Euro 2016 and Euro 2000,  and have the added experience of being one of the few countries to have won this competition on multiple occasions. Many pundits believe that this Euros and the World Cup in Qatar are the final chances for their ‘Golden Generation' to finally win a trophy, something that only adds pressure onto the player's shoulders.

All the stats you need ahead of Belgium vs Italy

A quick glance at the head-to-head record between these two great footballing nations only adds further weight to our prediction for a tight and tense 90-minutes on Friday. These two countries have locked horns on 11 previous occasions and it's Italy that edge proceedings with 4 wins, 4 draws, and 3 defeats against the Red Devils. The pair's last encounter arrived at Euro 2016 where Italy claimed a 2-0 win and when the pair met at Euro 2000, the Italians also secured a 2-0 victory. Roberto Mancini's men came into this tournament as dark horses while Belgium have pressure on them to win this competition as they were one of the pre-tournament favourites and this could be the final Euros that their so-called ‘Golden Generation' have the opportunity to win.

What a quarter-final tie we have for you, Belgium were one of the pre-tournament favourites and have won all of their games so far, keeping clean sheets in three of those four fixtures. The Red Devil's knocked reigning European Champions Portugal out of Euro 2020 thanks to a sublime goal from Hazard, Thorgan Hazard that is. It was always going to take something special to separate these two teams, as this tie could have gone either way. Belgium need to take confidence from their victory over Portugal as the games don't get any easier.

Italy we're one of the top three of four favourites to win Euro 2020 but following their performances during the group stage, they suddenly emerged as the dark horses for the title. Italy glided through their group without conceding a single goal but almost crash back down to earth against Austria in the last 16. That game finished goalless after 90-minutes but Austria appeared to have won the game, only for Arnautović's goal to be ruled out for offside. In extra-time, substitute Chiesa put Italy in front and Pessina grabbed a second 10-minutes later. Austria pulled a goal back and ended Italy's clean sheets run but Mancini's men saw out the victory.

Timothy Castagne remains on the sideline with that nasty eye injury while De Bruyne and Eden Hazard picked up injuries against Portugal and will be assessed ahead of the Italy game.

Italy will be hoping to welcome back Florenzi and Chiellini from injury ahead of the quarter-final tie against Belgium. The performances of Pessina, Locatelli and Chiesa in the last game, could see them promoted to the starting eleven against Belgium.

Belgium should start in their familiar 3-4-3 formation with Courtois in goal and Vermaelen, Vertonghen and Alderweireld in defence. Thorgan Hazard will play on the left of midfield with Witsel and Tielemans inside him and Meunier on the right. A front three of Lukaku, Mertens and Carrasco is expected, with De Bruyne and Hazard dropping to the bench due to injury.

Italy could make one big change to their starting lineup with the captain Chiellini returning to replace Acerbi. Donnarumma will start in goal and Bonucci, Di Lorenzo and Spinazzola will join their captain in defence. Verratti and Barella could be swapped out for Locatelli and Pessina, but Jorginho should be a certain starter in midfield, Up-front, we could see Chiesa come in for Beradi, but Immobile and Insigne are certain to start. 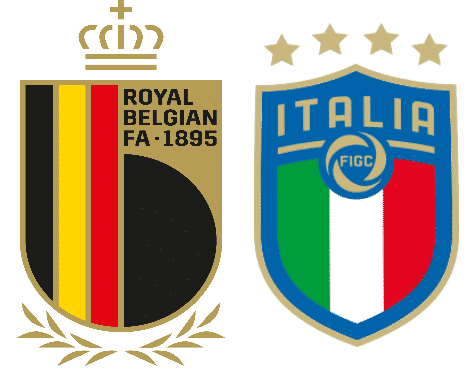