Beijing Guoan and Tianjin JMT meet to contest a Chinese Super League fixture on Monday, June 13th. Beijing Guoan are targeting their second win on the bounce this weekend. Read our free predictions and find the latest odds for the fixture below in our detailed match preview.

After their victory in midweek, Beijing Guoan are aiming to make it two wins on the bounce when they take on Tianjin JMT. Read our top three predictions for this weekend’s fixture below.

Beijing Guoan got their campaign up and running in midweek when they beat Rongcheng 3-2 in an exciting encounter and with their first victory of the new season bagged, they can hunt down another against Tianjin JMT. The visitors have looked well off the pace so far, taking just one point from the first six on offer and they could be outgunned by Beijing Guoan’s superior firepower on Monday.

Monday’s tussle at the Workers' Stadium pits two uninspiring defences against each other and we’re tipping both backlines to concede. Both Beijing Guoan and Tianjin JMT are still searching for their first clean sheets of the new Super League campaign, though it’s worth noting that BTTS landed in 100% of their respective matches since the season kicked off. Shutouts for either are unlikely on Monday and a stake on both teams to score looks like the smartest move again.

View our list of the top stats for Monday’s Super League fixture below alongside a tool to help you choose the best odds.

Beijing Guoan made hard work of beating eight-man Roncheng in midweek, though they eventually secured a victory. Zhang Xizhe was withdrawn at half time in that contest and his replacement, Gao Tianyi, could start ahead of the attacking midfielder on Monday..

Tianjin JMT were turned over at home by Shenzhen on Thursday and their limp performance would suggest that we should expect changes to the XI on Monday. Brazilian Eder came off the bench to net their consolation in midweek and the attacker could replace Ba Dun in the team's frontline. 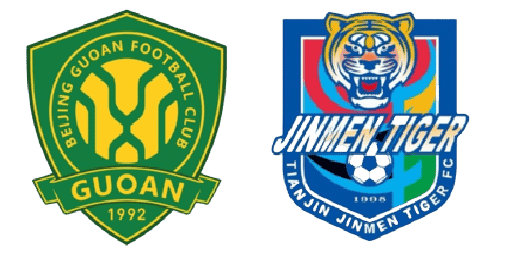 The bookies have priced Beijing Guoan as their favourites to win this week.