The Workers' Stadium will be buzzing with excitement as Beijing Guoan takes on the challenge of Shenzhen in round 5 of the Chinese Super League. Both sides have impressed in the opening fixtures of the 2022 campaign and will be looking to outgun each other in this meeting.

Only a paltry two points separate the two sides but it is the manner how they are accumulated that sets them apart. Shenzen has three wins to their name and has looked dominant in these outings. They have scored six goals and only allowed three in return, with Beijing scoring seven and conceding six showing the disparity between the two. Five of their last seven duels have also finished in the capital club's favour and the trend is set to continue in this meeting.

It will be a high-scoring affair at the Worker's Stadium. Both sides like to attack and take the game to their rivals. It is Beijing who has the barely higher scoring average and will be looking to put on a dominating act in front of home fans. With three of their last five domestic encounters finishing in this manner and the hosts seeing it come to fruition in three of their four league outings, expect it represented on the scoreboard again.

Beijing Guoan vs Shenzhen: Check out the best odds and the latest stats

Beijing Guoan vs Shenzhen: Check out the team lineups

A 1-2 defeat to Cangzhou in their opening game set Beijing Guoan back. However, they have roared back to form since, claiming two wins and a draw to close in on the top slots of the Chinese Super League. A win against Shenzen brings them closer to the top-three and gives them an outside chance on an unlikely title assault.

Add Shenzen to the equation and expect a result. The Bulls have registered three wins and tasted defeat in their four league outings this season. They have allowed less than a goal per league outing this season and will be looking to leverage it against their capital rivals. With Guoan unbeaten against them in eight attempts, this is Shenzen's best opportunity to arrest this poor record.

Questions About Beijing Guoan vs Shenzhen 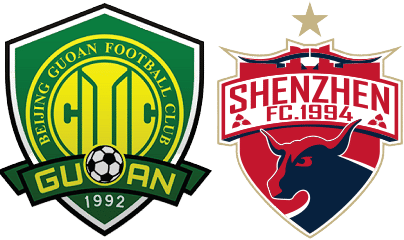 Where is the game being televised? Workers' Stadium (Beijing).