The Chinese Super League matches in group B are once again in focus this weekend when Beijing Guoan are playing host to Shanghai Shenhua at the Jiangyin Sports Park Stadium.

Beijing Guoan come into the game after a 2-0 loss against Changchun Yatai despite creating some good opportunities in the 90 minutes. Shanghai Shenhua picked up a second consecutive league victory as they beat strugglers Tianjin Tigers by a comfortable 3-1 score.

Shanghai Shenhua have been in decent form over the last few games and they have especially been able to dominate games against teams in the lower half of the table. After a string of difficult fixtures in May, the team has restarted the campaign with wins over strugglers Dalian Pro and Tianjin Tigers. These results will give a lot of confidence ahead of the game against Beijing Guoan, who lack finishing in the crucial areas of the pitch. Even though Beijing Guoan have a good head-to-head record against Shanghai Shenhua in recent fixtures, the away team can be expected to win this encounter.

Shanghai Shenhua and Beijing Guoan have largely played out matches that are difficult to separate the winning team from the losing team. In the last six encounters, a winning margin of two goals or more has been witnessed in just one occasion. This close nature is likely to continue, as Beijing Guoan continue to create chances going forward and it is only a matter of taking them.

The home games of Beijing Guoan have been a saviour with regards to their league position. The team beaten in three matches at the Jiangyin Sports Park Stadium, but they were held to a goalless draw by strugglers Tianjin Tigers in the last match. Furthermore, the top teams are yet to visit the ground this season.

After a long spell of poor results towards the end of May, Shanghai Shenhua would be pleased to restart the campaign with back-to-back victories, which will fill the team with a lot of confidence. Shanghai Shenhua not just one point away from the top and any points by Shanghai Port can be a way for Kang-hee Choi’s team to go top. 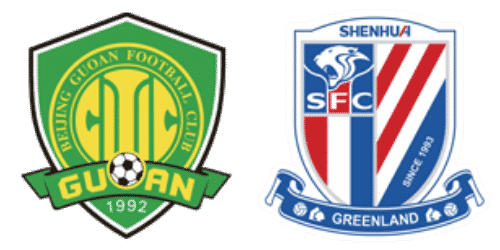