Following an away defeat, Bechem United will be eager to continue the home undefeated sequence when they host Berekum Chelsea in the next fixture. The Blues have also lost their points in the recent consecutive games.

Bechem United had been through a series of draws in their last attempts but changed the string and confirmed one win and one defeat. However, the Hunters seem consistent in the recent home attempts with an unbeaten sequence and winning four of the previous seven outings. On the other hand, Berekum Chelsea has struggled in the last games, getting two defeats in a row and losing four of the last five away games. Moreover, Bechem United also registered three wins in a row in the recent hosting H2Hs against Berekum Chelsea. Hence, the Hunters will be our favourites to get three points in this game.

Based on the current stats, a low-scoring outcome will be our next pick for this game. Despite getting through the winless streak, Bechem United have added a total of only five goals in the last five attempts. On the contrary, Berekum Chelsea scored only four goals in the same number of away outings. Four of the last five H2H meetings at the home of the Hunters also ended below 2.5 goals.

Bechem United vs Berekum Chelsea: Check out the best odds and the latest stats

Bechem United vs Berekum Chelsea: Check out the team lineups

The Hunters terminated their undefeated string and lost in the last game by 2-1 against Ashanti, losing the 0-1 lead in the final six minutes of the game. However, Bechem United have conceded only six defeats in the league so far and finds themselves third on the table. All of the players will be ready to make an appearance in this duel.

The Blues also ended their home unbeaten sequence in the last game with a 0-1 defeat against Dreams. After getting the combination of 12 wins and 10 draws, Berekrum Chelsea stands in the ninth position on the points table. The club manager Solomon Odwo will be happy to have a fully healthy squad available for the coming game. 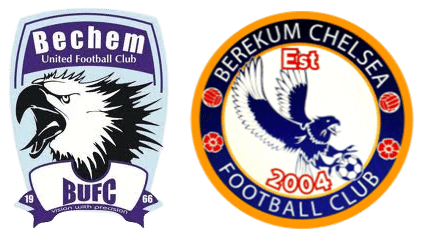 Where is the game being played? Bechem Park.