Last season these two sides played out a fairly cagey Champions League final with Bayern running out winners. This year, one of them will be going home at the quarter-final stage. Who will land the first blow? Find out with our Bayern Munich vs PSG match preview with free tips, predictions and odds mentioned along the way.

PSG might have turned in a star performance in the first leg of their last 16 tie against Barcelona but it feels a long time ago now; they've played nine games since suffering three losses in that time with the latest a big blow in the Ligue 1 title race. Bayern meanwhile have won seven games on the spin. Throw in the minor facts of home advantage, Bayern winning the past three head-to-head meetings and PSG being without Marco Verratti and Leandro Paredes in the holding role and it's hard to see anything but a win for the German giants – even without their main man, Robert Lewandowski.

Our first prediction mentioned Bayern winning their last seven games. What we didn't touch on is the way they've gone about their business in that time; they've scored 23 goals across those seven. Six of PSG's last 10 matches have also been over the 2.5 benchmark. Then you have the history of the two sides going up against one another; three of the last four meetings have seen at least three goals. The one match that fell under 2.5 was last seasons final.

With our tips to this point already highlighting our belief that Bayern will win in a game featuring goals it's perhaps not a huge surprise that our next prediction backs both sides to score. Bayern will be missing the best striker in the world in Lewandowski but they're far from a one man team; they've not failed to score in a game all season with Thomas Muller and Serge Gnarby both in double figures for the campaign. PSG have just blanked in their last match but with Neymar and Kylian Mbappe in their ranks goals aren't usually a problem; they've scored 21 in their last 10 matches. Bayern aren't known for a stern defence either. They've conceded in seven of their last 10 including both legs of their last Champions League tie.

All the stats and odds for Bayern Munich vs PSG

Bayern Munich defeated PSG in last seasons final with Thomas Tuchel losing his job a few months later. Now, the French side are under the tutelage of Mauricio Pochettino. Despite being well respected as a manager, he's followed by the fact he's yet to win a major trophy; after losing ground to Lille in Ligue 1 the Champions League could become even more significant. Bayern are hardly the side you want standing in your way. It's unlikely this match will be as conservative as the last time these teams met. We suspect it will be just as entertaining though.

FAQ about Bayern Munich vs PSG 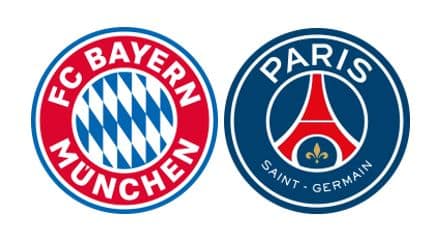