Bayern Munich suffered a surprise defeat at the hands of Bochum last weekend and could only earn a 1-1 draw with Salzburg in their Champions League encounter. It is odd to see the Bavarians fail to win in successive fixtures, a statistic that would be playing on Julien Nagelsmann's mind.

To stop the Bayern Munich attacking machinery, you need special tools that are not available in the market. Die Roten will surely score against Greuther Furth, the worst defence in the league. It is the Cloverleaves, whose output will make affairs interesting. They have been in good nick, with seven goals scored and nine conceded in their last five Bundesliga outings. Against their fellow Bavarians, Furth will be confident in getting on the scoreboard as they have conceded 9 goals in the same period. With Bayern's defence struggling and Furth on the uptick, expect goals at either end of the Allianz Arena pitch.

Building on the BTTS prediction and adding the match-winner selection gives us exciting odds. While Furth has only lost once in their last five outings, everyone pales in comparison to Bayern Munich. Die Roten have won eight of their last nine home fixtures in all competitions and should have enough in the tank to get over Furth. The reverse fixture saw Bayern come out on top in a 1-3 scoreline and we expect a similar result in this meeting.

Bayern Munich vs Furth: Check out the best odds and the latest stats

Bayern Munich vs Furth: Check out the team lineups

It has been a tough week for Julien Nagelsmann in the press. He sent out a strong team against Bochum to keep pace in the Bundesliga. It did not work out as he had anticipated with matters made worse as Die Roten returned to Allianz Arena from their trip to Salzburg with a 1-1 draw. They will need to give an emphatic response against Greuther Furth as Borussia Dortmund and Bayer Leverkusen catch up with them on the points table.

The first half of the season was one to forget for Greuther Furth. The other Bavarian outfit struggled at the bottom of the table while their fancy neighbours moved towards another Bundesliga title. The Cloverleaves have improved since the turn of the year, earning draws and wins, while staving off losses. As they meet in the unheralded Bavarian derby, they will be fancying their chances to give the reigning champions a run for their money and not be mere pushovers.

Questions About Bayern Munich vs Furth 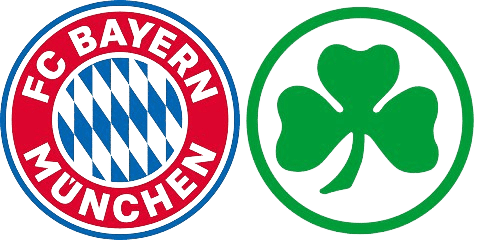 Where is the game being televised? Arena 4, DAZN Deutsch, Sky Sports Football (UK/Irl), and Viaplay.