Following their 1-1 draw with Borussia Monchengladbach last weekend, Bayern Munich thrashed Borussia Dortmund to add the German Super Cup to their list of achievements. Julien Nagelsmann will now turn his attention towards resurgent Cologne, who made little work of Hertha Berlin on opening day.

Die Roten's inability to post a big total against Borussia Monchengladbach would have given their rivals a sense of hope. Those hopes were trashed in midweek as Bayern Munich thrashed Borussia Dortmund 3-1 in the German Super Cup. It was in the second half that they set themselves apart from Der BVB and should follow this again against the resurgent Billy Goats.

Robert Lewandowski's strange call for a new challenge would not have hampered Bayern Munich's plans. Die Roten have enough firepower to take them beyond these challenges. Julien Nagelsmann launched a title challenge without Timo Werner and his charges will mean business when the time comes to play. They send three past Der BVB in midweek and should follow this with another goal blitz.

Cologne gave a good account of their scoring abilities as they overpowered Hertha Berlin 3-1 in Round 1 of Bundesliga action. They did concede against the Old Lady and Bayern Munich will use that as a roadmap to punish them. Die Roten also remain susceptible at the back with changes to their defensive makeup following the departure of Jerome Boateng and David Alaba.

Bayern Munich vs Cologne: Check out the best odds and the latest stats

Resurgent Cologne look to avoid whitewash at the Allianz Arena

It is difficult to expect any result other than one in favour of Bayern Munich in this fixture. They should take home the three points on offer as Cologne has not won in a competitive fixture against them since February 2011, losing 13 matches in this period. Moreover, they showed against Borussia Dortmund that they are beginning to adapt to life under Julien Nagelsmann with the Super Cup Win.

The circumstances paint a dire picture for Cologne who was impressed in their opening round win over Hertha Berlin. The Billy Goats were in complete control of the game, claiming 59% of the possession and sending 14 shots on goal. They had wanted the lethal efficiency in front of goal that Anthony Modeste and Florian Kainz showed, and the fixture promises to entertain in the current meeting.

Questions About Bayern Munich vs Cologne 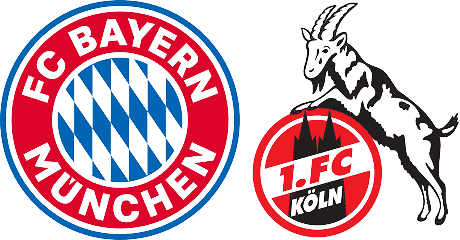