When Thomas Tuchel departed from Borussia Dortmund a day after delivering the club its first piece of silverware in five years, he did so under a cloud.

It's why, just four months later, there are plenty of raised eyebrows with the former Mainz manager being tipped as the favourite to take over the vacant Bayern Munich hot seat, according to German publication Bild.

There have never been any doubts over him from a tactical point of view. He impressed at Mainz and regularly caught the eye with how he set the side up. So much so he was the first – and probably only – choice to replace the charismatic Jürgen Klopp at the Westfalenstadion in the summer of 2015.

He took over a burnt out squad stagnating after their exertions under Klopp and rejuvenated them. Though not as warm as his predecessor, he didn't rely on man-management but instead on educating his players. The tactics were less intense and instead of putting a lot of emphasis on counter pressing he wanted his side to dominate the ball.

He put his trust in a young and untested Julian Weigl and reaped the rewards instantly. He welcomed Gonzalo Castro from Bayer Leverkusen and Dortmund started to control games in the middle third.

The now-43-year-old guided Dortmund to the best runners-up finish in Bundesliga history. Missing out to Pep Guardiola's well-oiled Bayern machine, his team scored more goals than any other while going unbeaten at home in the league.

He went toe to toe with Klopp in the Europe League and only lost out to a last minute Dejan Lovren winner at the Kop end of Anfield. He outclassed Carlo Ancelotti, the man he looks set to replace at the Allianz Arena.

Tuchel views the football pitch like a chessboard and knows exactly how to outthink his opponent.

This, by all accounts, is what Bayern Munich want. After Guardiola left to join Manchester City, the bosses in Bavaria thought they wanted a manager as opposed to a coach. A man who knew about politics in football and would oversee their domination.

But the players, after the rigours of playing under the Catalan-born tactician, have looked almost bored and because of this their play is suffering. There's a misconception in the media that players with egos don't like being told what to do. But footballers, young and old, all want to improve.

Under Guardiola the likes of Arjen Robben, Philipp Lahm and Franck Ribery, all in their 30s, noticeably improved. Lahm has retired but those remaining are no longer being pushed by a man who many feel just picks his best eleven players and expects them to win.

Times have changed. The Bundesliga has some of the most innovative coaches in the world and they prove week in and week out that a team all reading off the same page can beat better players.

Tuchel and this methods would be like an adrenaline shot to the Bayern Munich players. He'd ensure that the entire squad knew what he wanted on the pitch.

The parting of the ways at Dortmund had nothing to do with performances on the field and everything to do with his refusal to be a yes man. BVB have a structure in place, one they feel works having reaped the rewards of it under Klopp.

Their CEO, Hans-Joachim Watzke, is hands on in his approach. Michael Zorc, the club's sporting director, helps identify targets that fit the club's profile and is instrumental in transfers.

Tuchel is an individual and wouldn't always go along with these decisions if he had reservations. He pulled the plug on a deal to bring Atlético Madrid's Olivier Torres to the club.

While Watzke said the squad overhaul – selling Mats Hummels, Ilkay Gündoğan and Henrikh Mkhitaryan in the summer of 2016 – was “ambitious”, Tuchel wasn't happy and publicly stated it was “risky”.

The opinionated Bavarian manager revealed, back in January, that he wasn't informed of Swedish forward Alexander Isak's signing. He implied his expectations for the season were overambitious after assessing the club's signings.

Politics just wasn't his strong point. Rightly or wrongly, he wanted control. While he's not going to have 100 per cent autonomy at Bayern Munich, they won't be selling and buying players without his approval or input. The Bundesliga giants know to have a successful project you need everybody to be on the same page and it's why they may be the perfect home for Tuchel to really flex his coaching muscles.

How could Bayern line-up under Tuchel?

Like Guardiola, Tuchel is a man with many ideas. He's not just a one system fits all type of manager and adapts for different opposition. When at Dortmund he used a number of formations and experimented with players in foreign positions.

For example, when his Dortmund side beat Bayern last season he played a 3-5-2 formation with Mario Götze and André Schürrle playing as the two box-to-box midfielders.

Tuchel thinks outside of the box and this could be exactly what Bayern need. 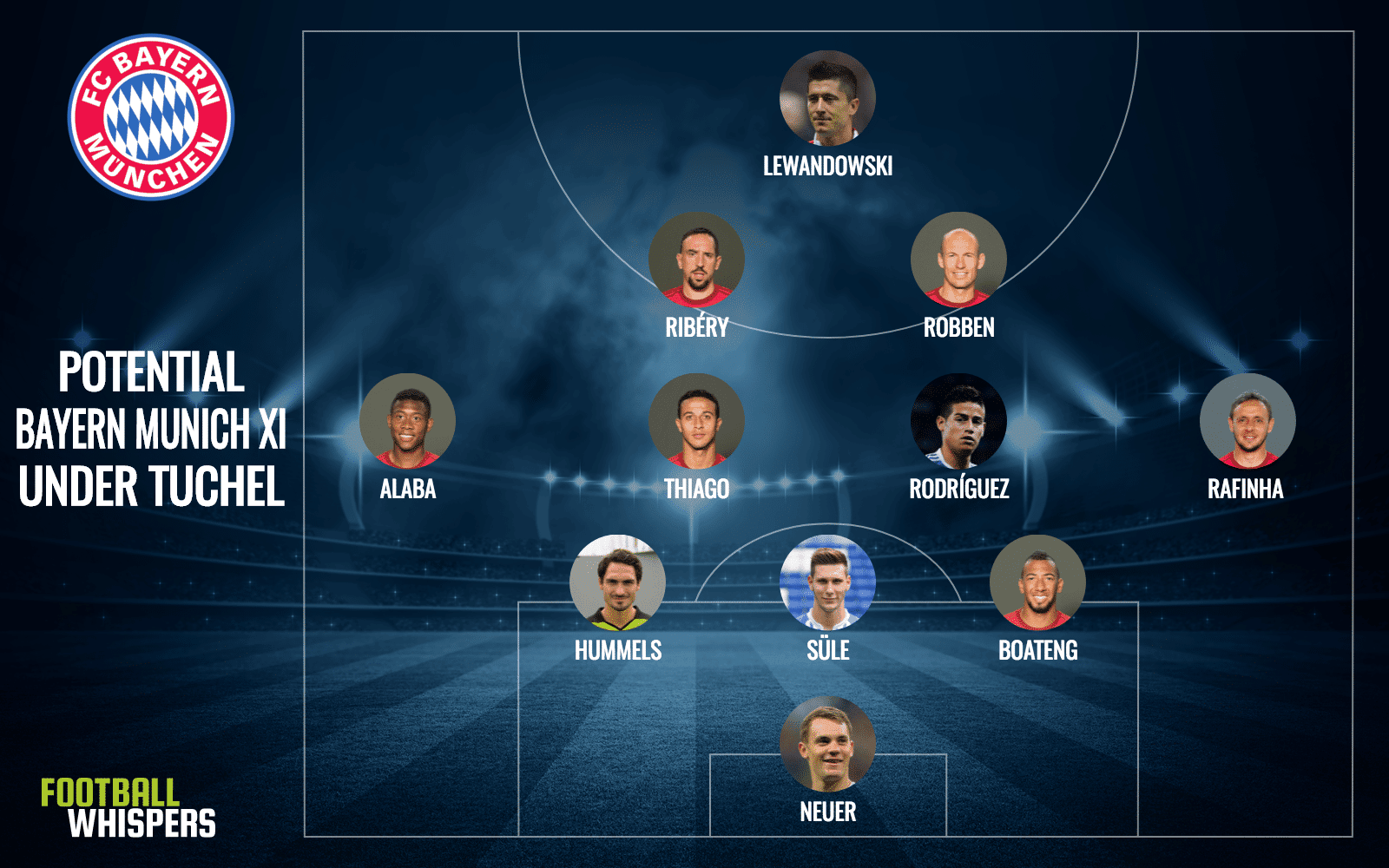 He may look to replicate his 3-4-3 system at Bayern Munich to make the most of the centre-backs he has at his disposal. All three selected have played in the system before and know what's required to make it work effectively.

Die Roten aren't blessed with an abundance of full-backs but in David Alaba they have one of the best in the world and Rafinha does a job. He could even use Kingsley Coman at right wing-back if he really wanted to get creative.

Arturo Vidal misses out with Thiago Alcântara being tasked with playing as a lynchpin in midfield. He'd be the link. He's not as defensively switched on as Weigl but on the ball he can pull the strings from deeper areas. James Rodríguez would be the creative midfielder in the final third. He could be the Castro of the system, kind of. 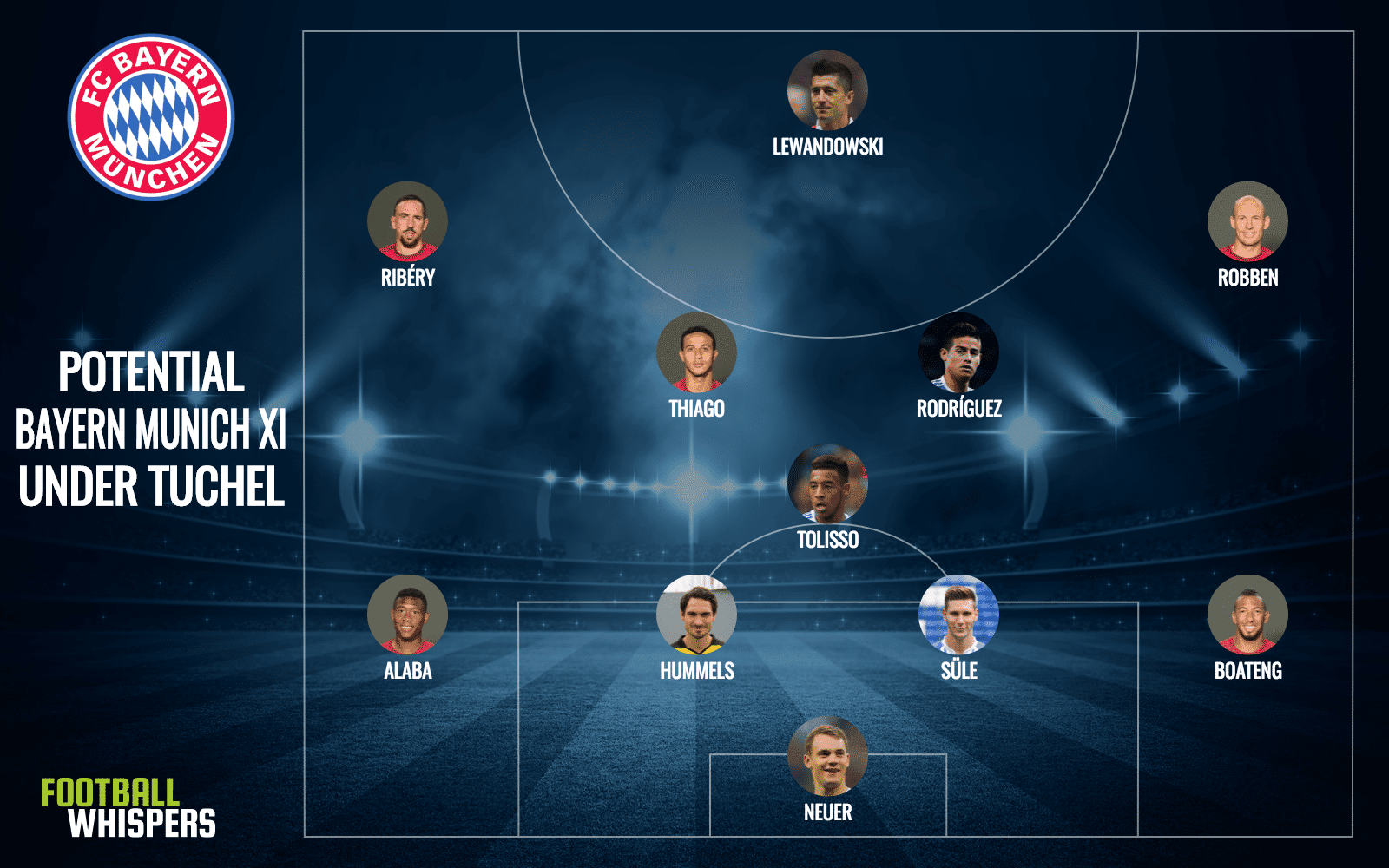 Alternatively, Tuchel could field a more traditional 4-3-3 formation. Jérôme Boateng may seem wasted at right-back but this is just a starting point. During play he'd tuck in to make a back three with David Alaba free to push forward and join the attack.

Corentin Tolisso is versatile, having played both full-back positions for Lyon, and could fill in on either flank if there's ever a quick turnover of possession. He's intelligent on and off the ball and could be a key cog in Tuchel's Bayern team.

The four behind Robert Lewandowksi are all attack minded but Tuchel likes to use press resistant players in centre-midfield. Attacking midfielders, like Rodríguez, are traditionally used to playing in tight spaces and can create something out of nothing.

This ties in with him preferring pace in wide areas and how Tuchel is always looking to work in-game situations which see his wide forwards isolated against full-backs.

Rodríguez and Thiago can play through the pressing lines, take men out of the game before playing in the wide players. On paper it all seems perfect for Tuchel and Bayern could once again be exciting to watch. They'll be dominating the ball, the space, playing in a way befitting of a European giant and living up to their FC Holywood nickname once more.