Bayern Munich have ruled the Bundesliga over the past decade but this season has brought a great disturbance in the force.

In other words, heading into the current campaign, the Bundesliga desperately needed a title race. Even Juventus, who have won seven straight Serie A championships, have at times been pushed close by Napoli and AS Roma.

With Niko Kovač assuming command of Bayern, there was hope an expected transitionary period would give the people what they want: an absorbing season-long narrative.

Eight games in, with Bayern faltering and Borussia Dortmund surging brilliantly back to the forefront of the German game, it looks as though prayers have been answered.

Firstly, let's look at Bayern. Of course, at around this point last year, the club severed ties with Carlo Ancelotti after an underwhelming series of results.

A humbling 3-0 reverse to Paris Saint-Germain in the Champions League proved the tipping point, but slip-ups in the domestic sphere had also laid bare the simmering tensions in the squad.

At the time of Ancelotti's sacking, Bayern sat third, three points behind Dortmund with four wins, one draw and one defeat from their first six matches. A draw in their next game left them with 14 points from seven games.

Kovač's side has managed one fewer point and the performances have been alarmingly sub-par. Whereas Ancelotti's departure was the culmination of a growing disconnect between players and coach, the club will be more reluctant to part company with a coach who is effectively two months into a three-year project.

The 46-year-old will be given time but heading into the international break on the back of a four-game winless run, which included last week's 3-0 thumping at home by Borussia Mönchengladbach, will have given the Croatian plenty to ponder.

It will also have given the Paulaner at the annual Oktoberfest soirée a bitter kick.

Bild say Paco Alcacer will stay with #BVB – two goals for Spain last night. He is on 🔥 pic.twitter.com/gr58lqjbSj

One of Bayern's most pressing concerns is an ageing squad. With an average age of 28 years and 66 days, they have the oldest squad in the Bundesliga this season. In stark contrast, Dortmund's is 25 years and 131 days.

In the defeat to Mönchengladbach, Leon Goretzka was the only midfielder or forward under the age of 27. While Kovač certainly has youth at his disposal, there is a sense that Bayern are short on fresh ideas.

Renato Sanches has revived his career after a disastrous loan spell at Swansea City last season but questions must be asked when 34-year-old Arjen Robben is being replaced at half-time by 35-year-old Franck Ribery.

Kovač has implemented his tactical vision at the Allianz Arena. His 4-3-3, characterised by intense counter-pressing, seemed a wonderful fit during the opening few weeks of the season. The champions started the campaign with four successive league wins, dominating the ball and creating several chances in each of those games.

Over the last three weeks, however, something has been amiss. Conceding a late equaliser at home to Augsburg was followed by a defeat to Hertha. They were then held at home in the Champions League against Ajax who, if anything, may have felt disappointed not to head back to Amsterdam with all three points, before falling to Mönchengladbach.

Long-time Real Madrid transfer target Robert Lewandowski should not be this side's scapegoat but he hasn't been at his razor-sharp best; the 30-year-old has scored just once from open play in 529 minutes of Bundesliga action this season.

That may not seem all that bad but for a striker as deadly as the Poland international, it falls short of his lofty standards.

The striker has an astonishing record of 109 goals in 132 Bundesliga appearances but this week, he claimed he entertained multiple offers to leave Bayern during the summer.

While he insisted he is happy, it's worth wondering if he has regained that clear-sighted focus that has marked him out as one of the deadliest marksmen of his generation.

Thankfully, for the sake of a title race, there have been benefactors to the growing malaise that has afflicted German football's kings. Dortmund, now coached by Lucien Favre, have shot to the summit in exhilarating fashion.

The only remaining undefeated side, the Westfalenstadion has been as raucous as ever thanks to some thrilling displays, including a 4-1 win over RB Leipzig, a 7-0 demolition of Nürnberg and see-saw seven-goal thriller last time out in which they came from behind to eventually beat Augsburg 4-3.

Paco Alcácer, who scored a hat-trick from the bench in that game, has six goals to his name in 81 minutes this season and has been key to Dortmund's recent triumphs, having also struck twice after replacing Maximilian Philipp in the 4-2 win at Bayer Leverkusen.

While Favre would ideally like to have defensive solidity, there has been in recent weeks incontrovertible evidence that something special is simmering at Dortmund.

That much is reflected statistically and Football Whispers' Story Mining tool highlights that Dortmund have significantly improved their open-play goals to xG ratio; from 0.89 to 1.58 goals per xG since September 14.

Jadon Sancho, Marco Reus, Jacob Bruun Larsen and Philipp started as the forward quartet against Augsburg, yet Favre still had Alcácer and Mario Götze on the bench with Shinji Kagawa and Christian Pulisic yet to return from injury.

With such a depth of creative talent in the squad, Dortmund are certainly proving to be this year's great entertainers; tighten up defensively and they can certainly challenge Bayern's grip on the German crown.

RB Leipzig may yet have their say, though. Ralf Rangnick's side lead the chasing pack on 14 points, edging Mönchengladbach, Werder Bremen and Hertha on goal difference.

With Julian Nagelsmann set to arrive next summer, Rangnick is doing a stellar job of laying the groundwork for European football's managerial wunderkind. 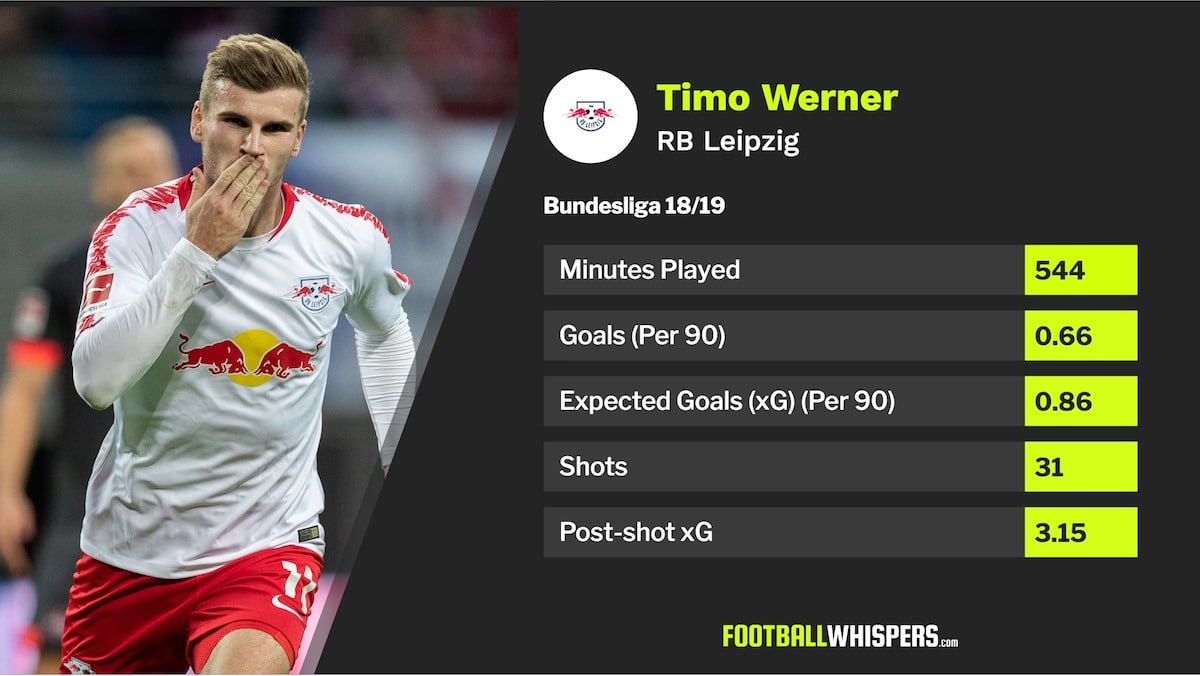 After picking up just a point in their opening two games, Leipzig have responded emphatically with four wins and a draw. Much to Rangnick's satisfaction, they haven't shown any signs of missing the influential Naby Keïta.

With Kevin Kampl and Marcel Sabitzer pulling strings in midfield, the forwards have thrived; Timo Werner, Yussuf Poulsen and Jean-Kevin Augustin are already on a combined 11 goals.

While the challenge of some of the title race pretenders will dissipate as the season wears on, the opening two months have offered the Bundesliga a first possible ding-dong battle since Bayern held off Schalke in 2010.

With the experience and pedigree available to Kovač, one can only anticipate a revival but, for once, it looks as though Bayern's path to glory won't be processional.