Arsenal were always expected to be one of the busiest clubs in the transfer window following the arrival of new boss Unai Emery, and now another player has been linked with a move to the Emirates Stadium.

It seems a new goalkeeper is on the agenda for the Gunners boss, throwing the futures of Petr Cech and David Ospina up in the air.

Cech has been one of the Premier League's best goalkeepers since arriving in 2004, at both Chelsea and Arsenal, but now his place is under threat as the north London side look to bring in German stopper Bernd Leno for £19million.

The 26-year-old came through the ranks at Bayer Leverkusen and has played nearly 300 games in all competitions since he broke into the first team picture in 2011. Now, Leno looks set for a crack in English football and a deal could be done in the next few days, having not made Germany's World Cup squad.

So why do Arsenal want him? What will he bring? Here, we take a detailed look.

Leno played 38 times for Leverkusen in all competitions last season and is highly thought of, keeping his place for the large majority in the Bundesliga. Leverkusen had the fifth-best defensive record, too, as they qualified for the Europa League in fifth place.

Arsenal, however, stick out like a sore thumb when you look at the top positions from the Premier League, and their defence needs improving quite considerably.

Last season, Cech was the fourth-highest for punches with 0.62 per 90 minutes. Perhaps Emery wants someone who can come in and claim instead of potentially putting the ball back into a dangerous position. Leno made just 0.33 punches per 90 minutes, nearly half of Cech's record.

However, Cech was actually impressive with the number of balls claimed, make one per 90 minutes in each of his 34 Premier League games, and Leno was not far off with 0.9 per 90.

Leno seems extremely comfortable on the ball at his feet and made 22.45 accurate passes last season per 90 minutes, making him ranked sixth against other stoppers in the Bundesliga. Cech made 15.69 accurate passes per game. 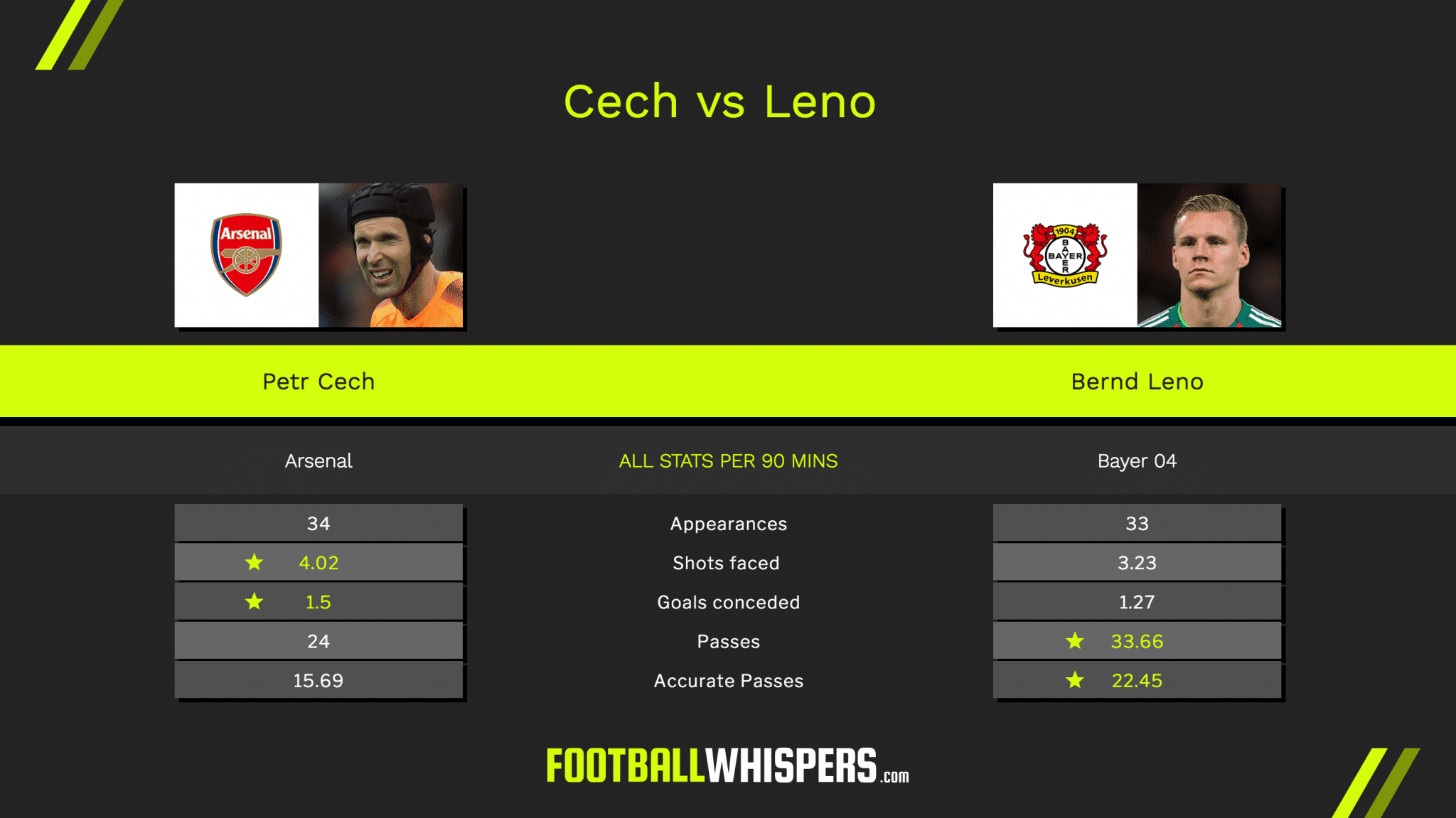 What's more impressive is that overall in passing ability, Leno made 33.66 per 90 minutes compared to Cech's 24. It shows the German doesn't mind getting involved in the play at the back and perhaps takes the pressure off his defence a bit more, opening up for the ball into feet.

Cech is still more than capable of performing at the highest level but is now 36 years old and perhaps the Gunners are looking towards the future a bit more, but also looking to reshape their starting XI under a new boss.

Yes, they may have conceded 51 times last season in the Premier League, but Cech proved he can still make important saves when needed. According to Wyscout, he made on average 2.69 reflex stops last season per 90 minutes, facing 4.02 shots per game, too.

Overall, there isn't too much to separate the two men apart from age and perhaps last season's statistics. There's no doubt Leno would bring a freshness to Emery's new-look Arsenal and the defence, and you have to wonder whether Cech would be happy playing as a No.2.

He probably wouldn't – and is likely to receive a few offers from around Europe, for sure. If Arsenal could somehow keep both, it would be a huge bonus and competition in between the sticks.

Ospina, on the other hand, has proved he's happy to be the back-up at the Emirates and is an able person to have away from Premier League action.

Initially, fans might think it would be he who would be off this summer if Leno arrived, but you just can't see Cech playing second fiddle, especially when he knows he has a few more years left in him.

So Ospina might stay with the Gunners and that means Cech's time in London – and maybe English football – is over after 14 years. But, having been a reliable customer for so long, expect a number of clubs to come in for him.

Cech has been linked with a loan move to Napoli next season.

What's more, his current deal runs out next year. It just seems a new era is about to begin under Emery and Cech may have played his final game for the Gunners already.