The Champions League final sees the best left-back in world football, Andrew Robertson, come up against a pretender to his crown, Marcelo.

All joking aside, the Liverpool full-back has been one of the breakout stars of the season for the Reds while the stock of Brazilian has dramatically fallen after a number of nightmare matches for Los Blancos.

It's fitting the final pits these two players together, though. Robertson has been hailed as the Scottish Roberto Carlos after catching at Anfield since replacing Alberto Moreno.

Marcelo, meanwhile, is considered by many to be the best left-back Brazil have developed since the Real Madrid legend, who left the Santiago Bernabéu back in 2007.

Both full-backs head into the Champions League final with a point to prove and could play a pivotal part in their teams coming up trumps in Kyiv.

Robertson will no doubt be determined to prove he's not out of place on the grandest stage of them all. He arrived during the summer transfer window after the Reds missed out on a host of other players but the Scotland international has gone from strength to strength since getting his break in the team following an injury to Moreno.

Just 12 months after being relegated from the Premier League with Hull City he's going to be lining up against Real Madrid in the biggest match in club football.

A solid outing in the Olimpiyskiy National Sports Complex will give the 24-year-old a sturdy platform to build on ahead of the new campaign and would go a long way to ensuring he remained Jürgen Klopp's first choice left-back for years to come.

Marcelo shouldn't have anything to prove. The 30-year-old has made over 400 appearances for Real Madrid and has turned out for Brazil on 52 occasions. He's won four La Liga titles and has three Champions League medals already. Too many he's the dictionary definition of a modern day full-back.

However, there's a nagging feeling he's coasted by on his attacking talents while neglecting the defensive aspect of his game and it's come to the fore this season.

The former Fluminense youngster has been at fault for a number of goals this term, as highlighted in a recent feature, and this has lead to even more questions being asked.

If he manages to pocket Mohamed Salah then doubters will be silenced and the noise will be deafening. 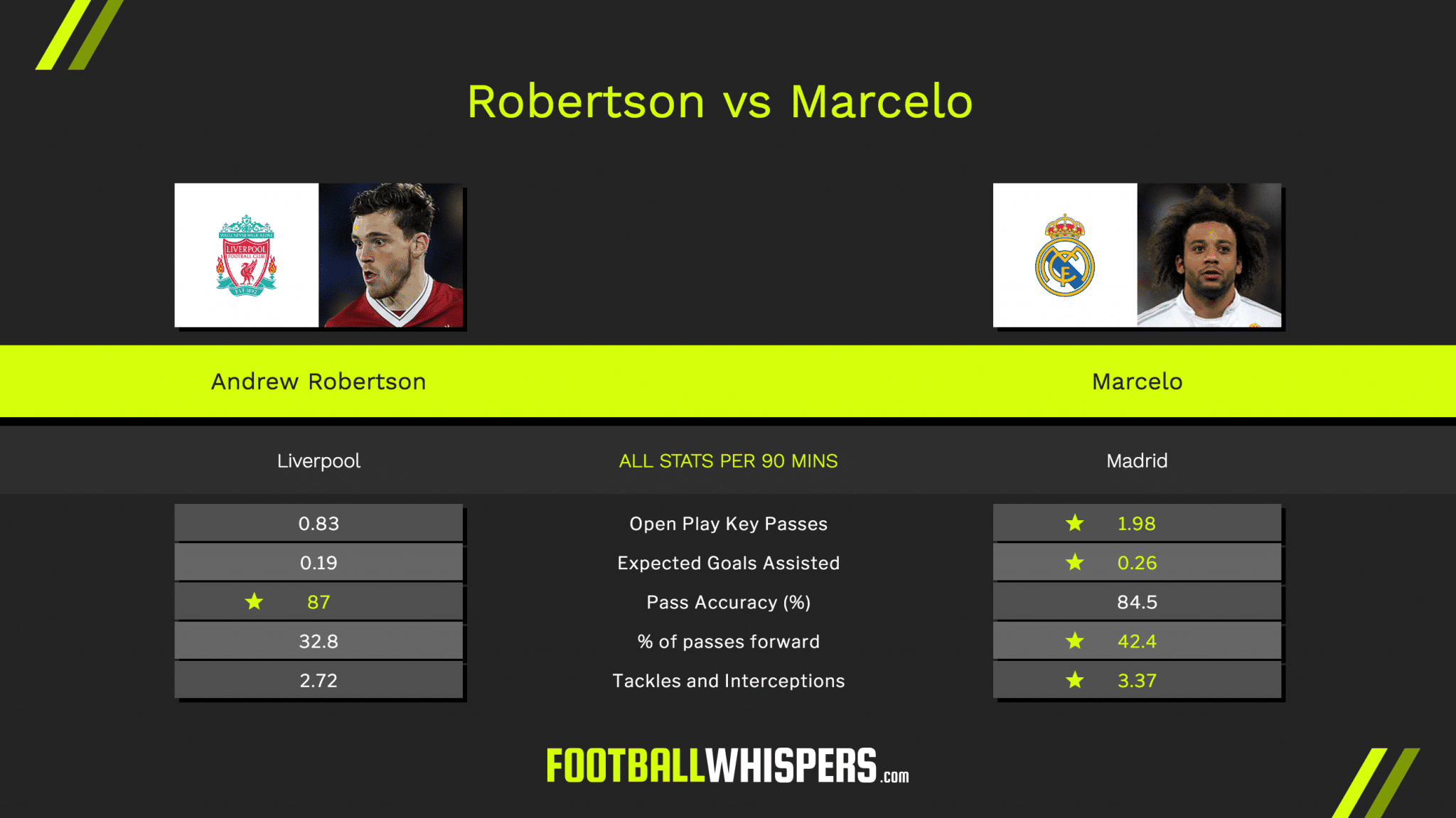 Despite the narratives surrounding the two players, it's Marcelo who comes out on top when comparing the pair. The stats have been purposely chosen with the first four highlighting their impact going forward and the last one flagging up their defensive influence.

Marcelo comes out on top in open play key passes, expected goals assisted, percentage of passes played forward as well as tackles and interceptions per 90 minutes.

What's interesting is the fact the pair play a similar number of passes (54) but the Real Madrid flyer plays just shy of ten per cent more passes forward than the Liverpool No.26.

It highlights just how progressive he is and why he's considered to be an integral part of the way the La Liga side build their forays into the the opposition's half.

Their part to play in the final 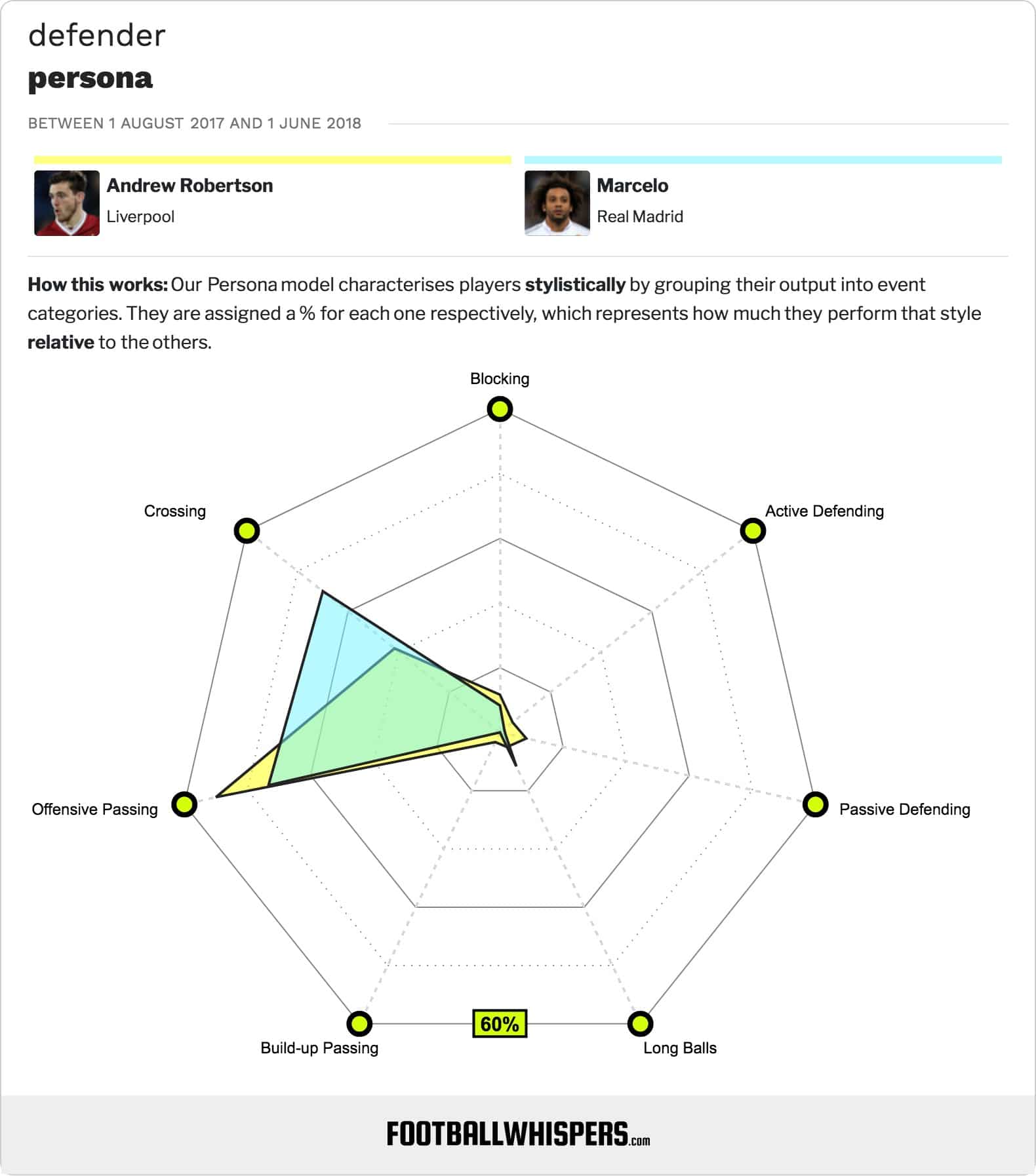 Our Persona profile, exclusive to Football Whispers, compares the two players stylistically. The biggest difference is how Robertson is characterised by his crossing while it's not as much of a key aspect to Marcelo's game.

When thinking of potential match winners and game changers, the two left-backs wouldn't top many lists but the game could well hinge on which of the duo has a better 90 minutes.

Marcelo, as previously mentioned, will be up against Salah. Klopp has pieced together a system which helped turn a 15-goal a season winger into one of the most feared forwards in the world.

The Egyptian has 44 goals this season and is just three shy of Liverpool's all-time record currently held by Ian Rush.

Not only could he play his part defensively, he's also going to important going forward. His desire to attack could see Liverpool scrambling to give Trent Alexander-Arnold the cover he'll need which in turn would open spaces up elsewhere.

Robertson, like his Real Madrid counterpart, will essentially have to be in two places at once on Saturday. He can't be at his offensive best because the Reds will have to be shored up defensively but by the same token he can't be too conservative.

He has to occupy Dani Carvajal, the right-back, to allow Sadio Mané to drift into central areas and impact proceedings there. The more isolated players are against the Senegalese speedster, the better it is for Liverpool.

The battle of the left-backs might not the biggest of battles but it could turn out to be the one of the most important.