West Ham United have reportedly agreed the terms of a loan deal with Chelsea for striker Michy Batshuayi, with the east London club and Real Betis of Spain's La Liga both in discussions to take the Belgian on loan for the remainder of the season.

Although he was never able to make a sustained impact at Stamford Bridge following his £30million arrival from Marseille in 2016, the 25-year-old has proven himself and able goal-scorer at domestic, European and international level.

But, after a horrendous spell on loan at Valencia this season, which has seen him score just once in the Spanish top flight, Batshuayi's stock is lower than ever.

The former Standard Liege poacher joined Los Che in August, and his first – and ultimately only – La Liga strike for the Mestalla club saw him become the first player to score in the top divisions of England, France, Spain and Germany in the 21st century.

However, much like his time at Chelsea, Batshuayi has been utilised predominantly from the bench, with just four of his 15 La Liga outings coming as a starter for Marcelino's men. 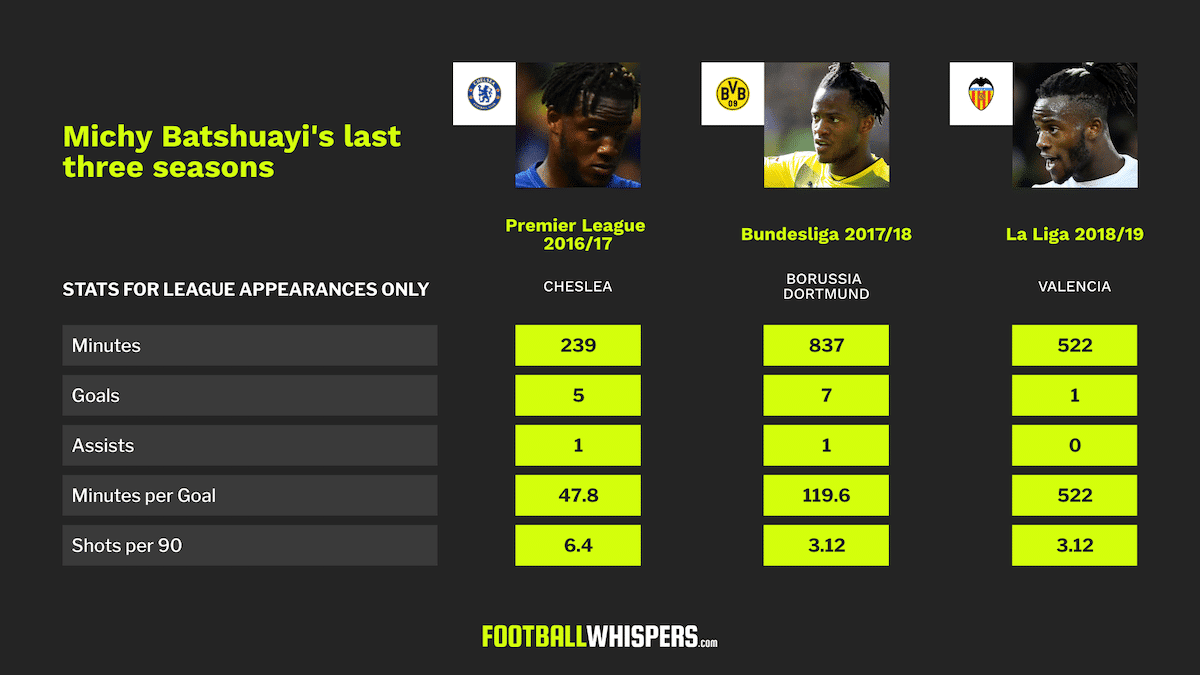 Having made few waves in Spain this term, Valencia are reportedly desperate to cut short Batshuayi's loan in order to rid themselves of his wages.

There is still reason to believe that, with the trust of the right manager and a sustained run as a string striker, the Belgian can once again become are reliable goal-getter.

Indeed, just last season, before a broken leg truncated his time in the Bundesliga, Batshuayi was prolific while on loan with Borussia Dortmund, scoring a goal very 119.6 minutes on average.

And in Chelsea's title-winning campaign of 2016/17, Batshuayi, while never able to establish himself in the starting XI ahead of Diego Costa, was a more-than-useful weapon for Antonio Conte's Blues, remarkably averaging a goal every 47.8 minutes.

West Ham's current top Premier League scorer is winger Felipe Anderson with seven goals; the Hammers could use a striker of Batshuayi's calibre.

And after three seasons in a purgatory of loans and subs' benches, Batshuayi could use a new, long-term home.