“He is a warrior who will not surrender, who is hard in the fight but is fair in the soul.”

The inscription on the statue of Gabriel Batistuta that stands outside Fiorentina’s Stadio Artemio Franchi, could not have summed up the legendary striker any better.

Throughout the 1990s, Serie A was the richest and most glamourous league in world football — streets ahead of the emerging Premiership, and besting La Liga by almost any metric you cared to apply.

In that decade, the Italian top-flight had no shortage of iconic strikers. Phenomenal goal-scorers such as Christian Vieri, Alessandro Del Piero, Roberto Baggio and Ronaldo, all thrilled and delighted fans around the world on a weekly basis.

But for those of us who grew up in the UK, and are old enough to remember Football Italia – Channel 4’s Sunday morning Serie A highlights show that ran throughout the decade – there is no more iconic image than that of Batistuta wearing the famous violet of Fiorentina. With his trademark mane rippling in the wind, and with arms spread wide and fists pumping in celebration of yet another goal scored, the man affectionately known as “Batigol” was the epitomic born goal-scorer.

Having gotten his start in Argentina with Newell’s Old Boys, Batistuta’s early career saw him tread a path few have traversed. He signed for , and after just one season at the Estadio Monumental, he crossed the divide of Argentinian football’s greatest rivalry by joining Boca Juniors.

At Boca, Batistuta finally began to realise his potential, and at the end of his first season at La Bombonera, he won the 1991 Copa América with Argentina before moving to Europe to sign for Fiorentina.

Despite his excellent form in front of goal, La Viola were relegated at the end of Batistuta’s second season in Italy. Shunning offers to join Manchester United and Real Madrid, he elected to stay with Fiorentina and fight to get them back into Serie A, later explaining: “I would rather have won one title with a team like Fiorentina than ten titles with a team like Manchester United.”

However, in nine seasons with the Florence club, Batistuta was never a Serie A champion. In what would prove to be his final campaign with the club, Fiorentina, by now captained by the Argentinian striker, lead the title race for much of the 1999-00 campaign, before a late slump in form saw them finish third.

In the summer of 2000, Batistuta joined AS Roma for £23.5 million, which is still a record sum paid for a player over 30 years old. He left Fiorentina as their all-time highest Serie A goal-scorer with 152 goals, along with a Serie B and Coppa Italia winners’ medal. 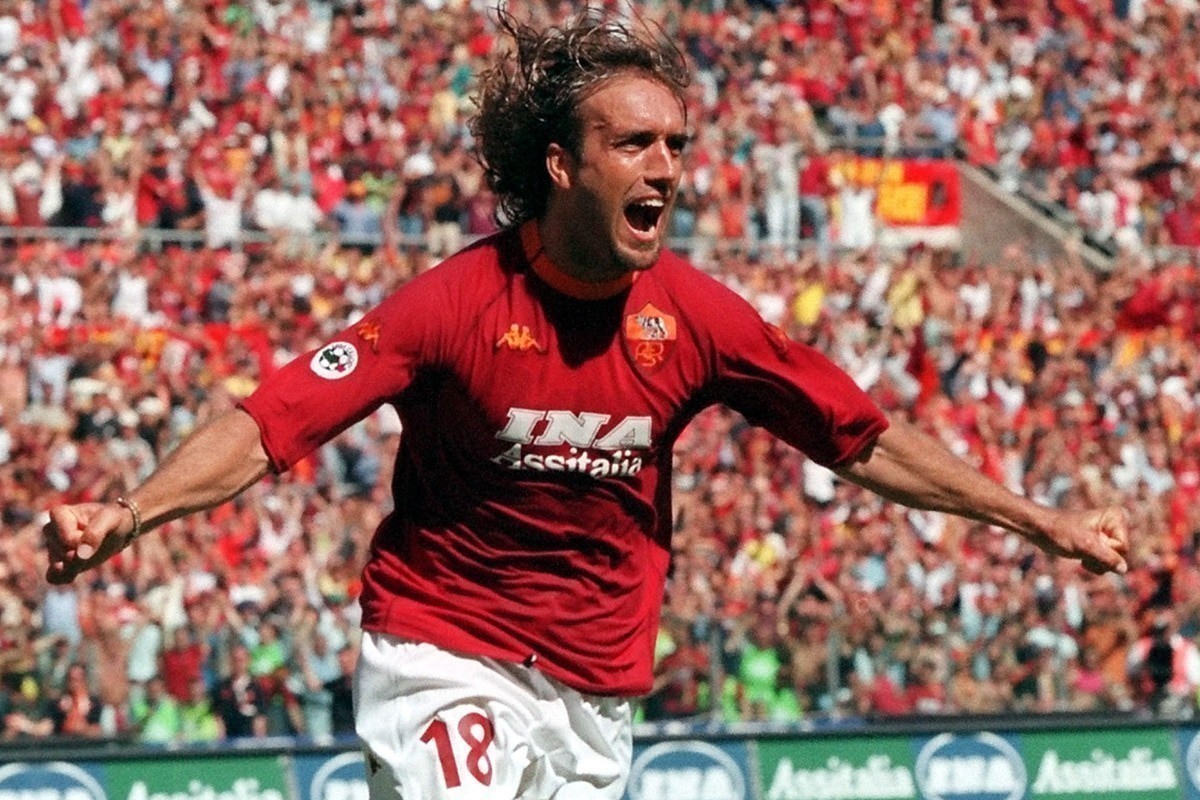 At Roma, Batigol proved to be the final piece in manager Fabio Capello’s puzzle. The addition of the experienced 30-year-old proved to be the catalyst to ending the Giallorossi’s 18-year Scudetto drought.

In 2016, the notion of a strike partnership almost seems archaic. Most top-level sides chose to operate with a single striker system, the lone frontman supported either by attacking midfielders or wingers cutting inside.

But in the late-90s and early-2000s, the good old-fashioned centre-forward double-act was still commonplace: there was Dwight Yorke and Andy Cole at Manchester United, Raúl and Fernando Morientes at Real Madrid, and Filippo Inzaghi and Del Piero at Juventus.

But few pairings struck the perfect balance of poacher and creator in quite the same way as Batistuta’s partnership with 24-year-old Francesco Totti.

The precociously talented Totti was the archetypal number 10, adept at dropping off the forward line to collect the ball, creating space and openings with a subtle shift of his bodyweight followed by perfectly-threaded passes. When paired up with Batistuta – the very embodiment of what it means to be a number nine – Capello had one of the most potent front-lines around.

Batistuta’s 20 Serie A goals in his first season at the Stadio Olimpico went a long way towards securing the title for Roma, as well as repaying the huge fee the club had forked out to acquire his services from Fiorentina.

However, the following two seasons would see the Agentinian’s form tail off dramatically. A loan spell at Internazionale preceded a move to Al-Arabi of Qatar, as the Serie A legend wound down his career.

Although, still imbued with a burning desire to put the ball in the back of the net, and showing that there was life left in the old dog, Batistuta broke the Qatari league record with his 25 goals for his new club. 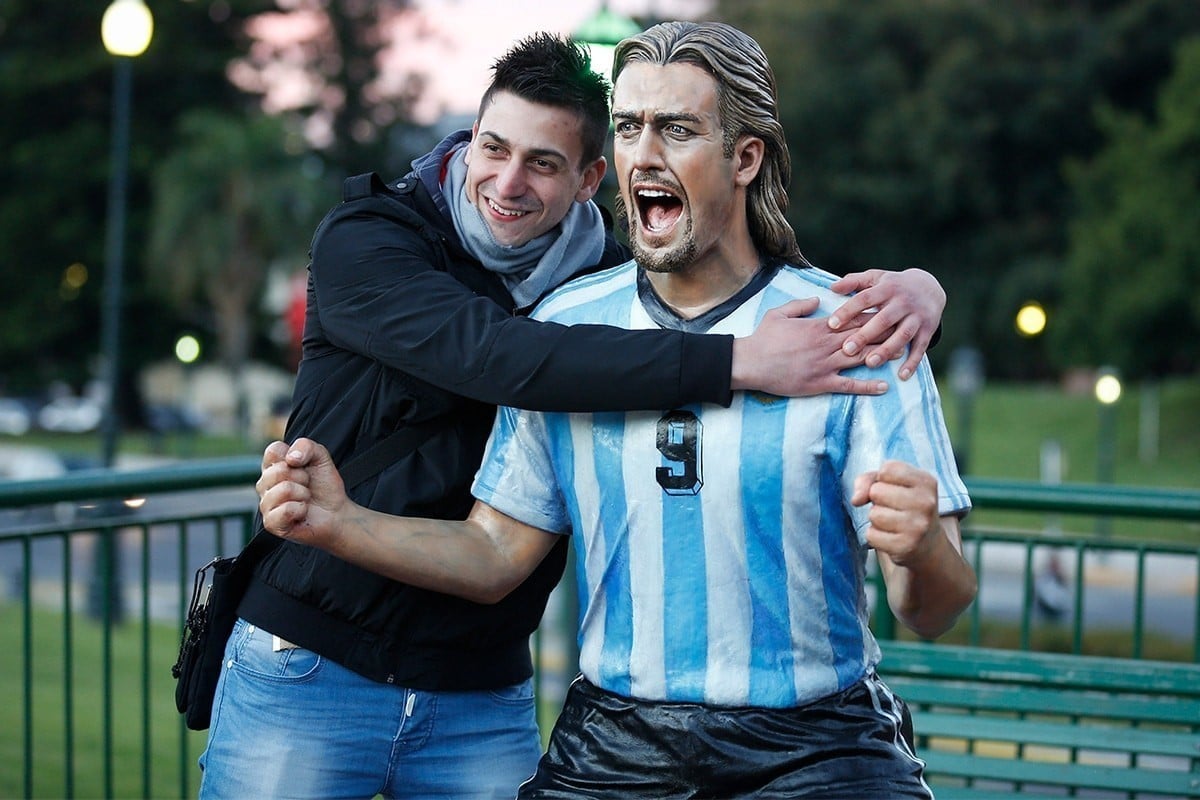 On the international stage, Batistuta’s record is comparable to any of the game’s greatest marksmen. His return of 54 goals (although FIFA actually recognise an additional two, scored in a 1995 tie against a Slovakian youth team) in 78 matches, flies in the face on the accepted wisdom that one goal every two games is a more than healthy output at international level.

Indeed, Batigol’s 54 goals stood as the all-time high mark for La Albiceleste from his international retirement in 2002, right up until Lionel Messi trumped it in this summer’s Copa América Centenario – although the Barcelona superstar needed well over 100 caps to match Batistuta’s goal-scoring feat.

If his record for Argentina wasn’t impressive enough, upon closer inspection, you realise that the former Fiorentina goal machine truly came to life when it really mattered: 23 of Batistuta’s international goals were scored during major tournaments, with 10 goals netted in 12 World Cup appearances. Furthermore, he remains the only player to plunder hat-tricks in two different World Cups.

If you were to build the perfect striker, Batistuta possessed every attribute you would look for. But he was also capable of so much more than what we’d typically expect of a number nine. He had such flawless anticipation that it almost seemed as though he was in telepathic cahoots with the ball, constantly being tipped off as to where in the 18-yard box it would land.

More than just a penalty area chance-sniffer, though, Batistuta was capable of the utterly sublime. His rocket of a right foot also had a delicate setting; a single game could see a 30-yard thunderbolt juxtaposed with a beautifully measured chip to outfox an on-rushing goalkeeper.

In addition to his vast and diverse skillset, Batistuta’s humility contributed to his status as a hero on the terraces too. A simple, family man who lived to score and celebrate goals with his adoring public.

With a legacy that stands in definition of the era and the league that he dominated, Batistuta is one of the true footballing icons of his generation.