They might not seem like the obvious club to raid but Basel have a track record when it comes to developing wide forwards who can perform in the Premier League. Though the sample size isn’t the largest, two of their former wingers are catching the eye in the English top flight this season.

Mohamed Salah has blitzed the league since his £39million move to Liverpool from Roma and is already on 28 goals with seven games to play. The 38-game Premier League record of 31 goals could be shattered at this rate.

And, to a lesser extent, Xherdan Shaqiri has stepped up for Stoke City, at least on a personal level, despite the predicament the club currently find themselves in. The Swiss pocket rocket has a career-high seven goals and has added a further six assists. He’s had a hand in 44 per cent of the goals Paul Lambert’s men have scored.

This hasn't gone unnoticed. Arsenal, Leicester City and Southampton have had scouts at the St. Jakob-Park this season taking a closer look at one player in particular: Mohamed Elyounoussi.

According to ESPN FC, the Premier League trio are interested in signing the 23-year-old, and his performance in Basel's recent 2-1 win over Manchester City has resulted in a scramble for his signature, the kind of which the Swiss side haven't been part of since Salah was chased by Liverpool, Chelsea and a host of Italian clubs back in 2014.

The Moroccan-born Norway international put in a man-of-the-match performance against Pep Guardiola's side.

He netted the equaliser, emphatically firing the ball into the bottom corner from around the penalty spot, before setting up the winner for Michael Lang. The Basel attacker led Yaya Touré on a merry dance from the centre of the pitch into the left channel, before playing a delightful reverse pass, which took Oleksandr Zinchenko out of the game, into the path of Lang who fired past Claudio Bravo.

It wasn't his first big performance in Europe's elite competition, either. When Basel travelled to Portugal to face Benfica, a hostile environment was silenced inside of five minutes after Elyounoussi nodded the ball past highly rated shot-stopper Mile Svilar. He's been directly involved in 20 goals this campaign in all competitions, 13 of which have been assists.

After the victory at the Etihad, Elyounoussi's agent, Ferhat Ciftci, confirmed there was a great deal of interest in the player, but refused to name the clubs courting his client.

“I don't want to speak specifically about certain clubs, but there are lots of teams interested in Mohamed. He was man of the match against Manchester City and I know some clubs went to watch him in that game. His performances for Basel have made a lot of teams sit up and take notice of him and what he can do at the highest level.

“The boy is ready to make the next step in his career and I have a lot of meetings planned with clubs so we will see what happens.”

The versatile attacker, who can play anywhere across the forward line but excels primarily operates on in wide areas, seems ideal for the English game. He's direct when in possession, averaging 2.5 successful dribbles in the Champions League per 90 minutes, something defenders in the English top flight struggle to deal with.

Elyounoussi scores a variety of different goals, meaning he's unpredictable and difficult to stop. He can lash the ball home, pass it beyond a keeper, or power a header into the top corner. Get close and he'll wriggle his way free, but, if you stand off him, he has the ability to pick a pass, as is shown in the screenshot below. 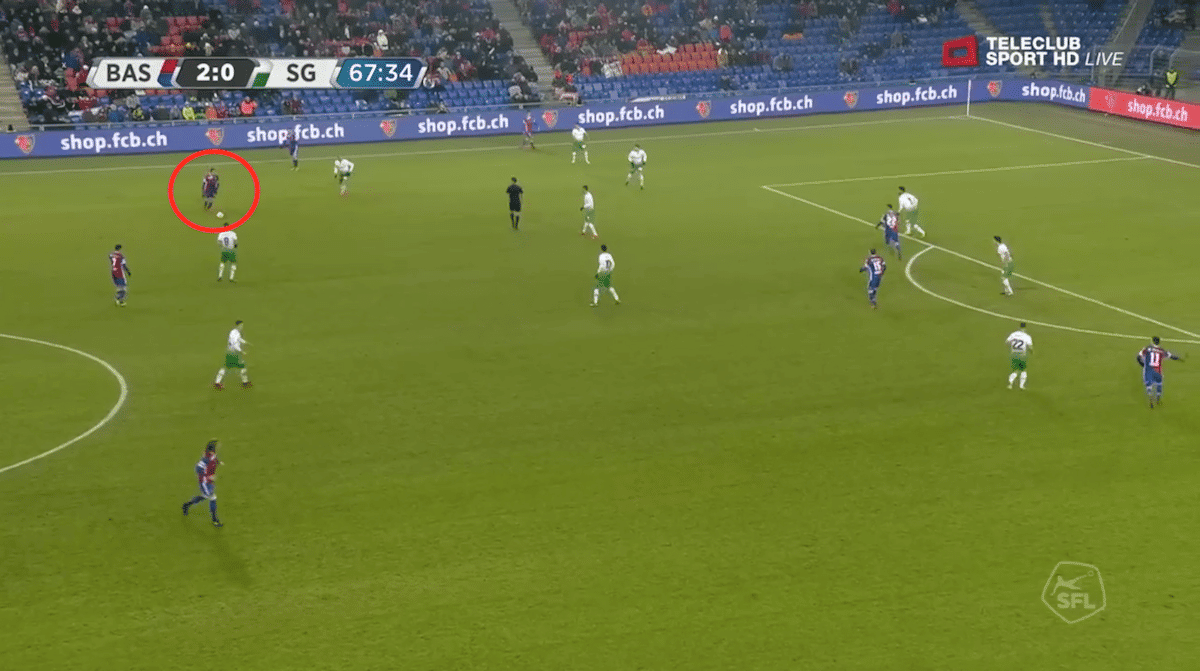 The former Molde player, who bagged 30 in 70 appearances for the Norwegian club in the league, is circled in possession of the ball. The away side have a number of players in defensive positions and there are eight opponents between Elyounoussi and the goal.

There's no simple pass on. 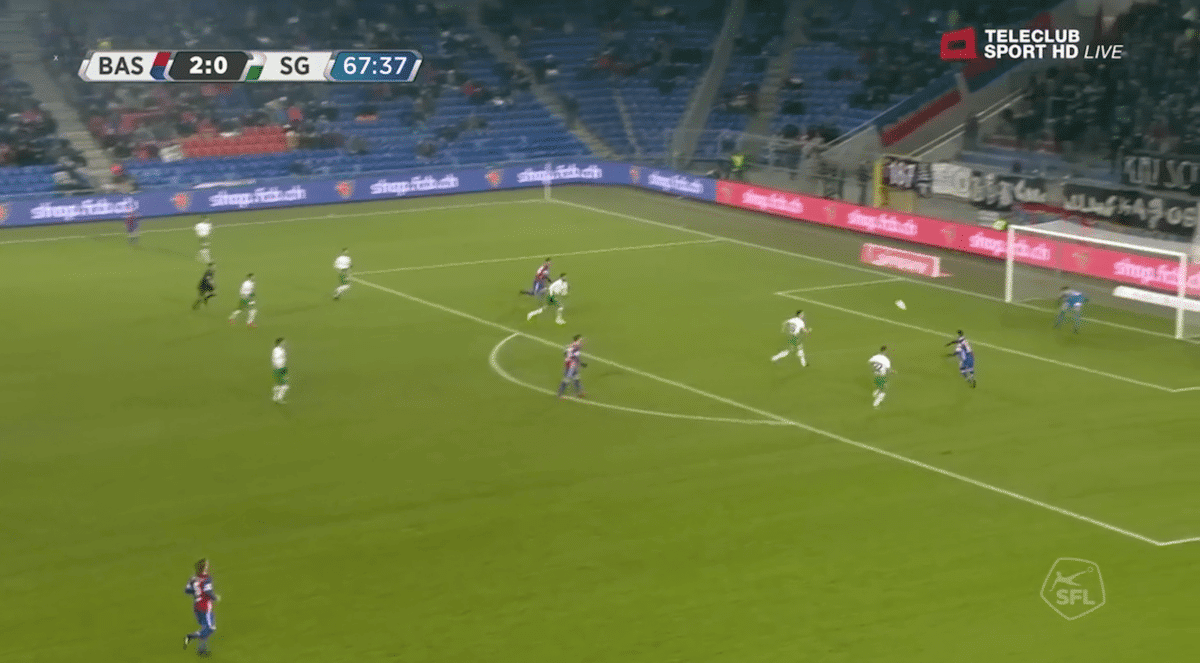 Undeterred by this, the Basel No.24 clips a ball over the top to match the run of his team-mate from the right position. It's perfectly weighted, which is by no means an easy thing to do given the limited amount of space he has to aim for, but the attempt is headed wide.

There are countless more examples of Elyounoussi's vision and ability on the ball being overlooked by the opposition. He has the ability to act as a playmaker and could play a key part in breaking down teams who sit in a low block.

Another one of his strengths is his work rate.

The 23-year-old also works tirelessly without the ball. His high-energy style means he can play as part of a high press, and he's familiar with pressing triggers. He's relentless and doesn't give the opposition a moment's rest. He's what many would describe as a transitional player – always ready to turn defensive situations into attacking ones. 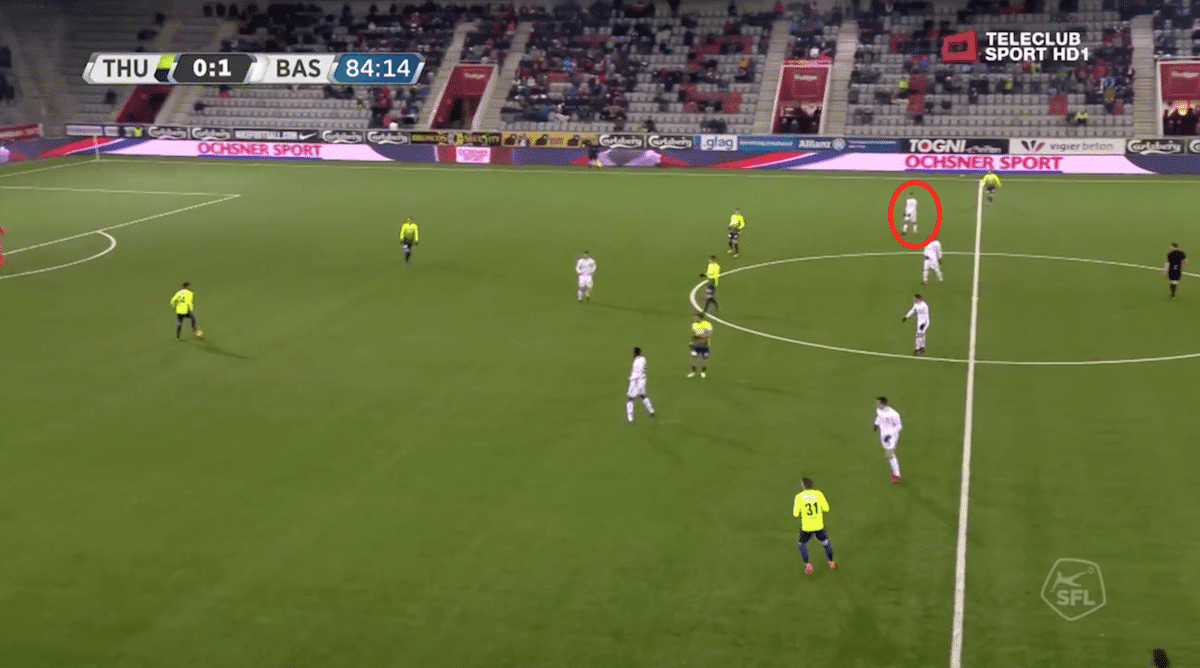 In the picture above, you see Elyounoussi circled in red. Basel are standing off the opposition and allowing them to have the ball in a position they don't deem to be dangerous. The adopted Norweigan has dropped from his attacking position to cut off the diagonal pass to the man on the Thun left. 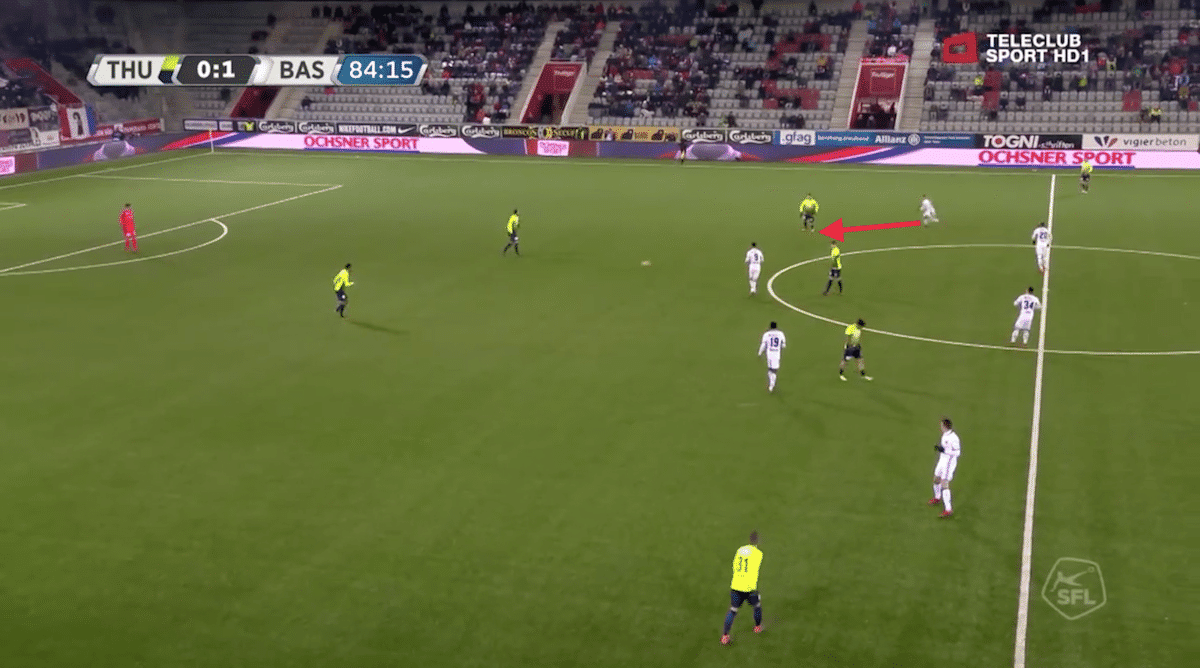 Here you see one of Basel's pressing triggers. The centre-back plays a pass to the man in midfield. As soon as it leaves his foot, Elyounoussi bursts into life and closes down the space. He nips in and dispossesses the player before he's even had chance to take a touch. He then drives into the space. 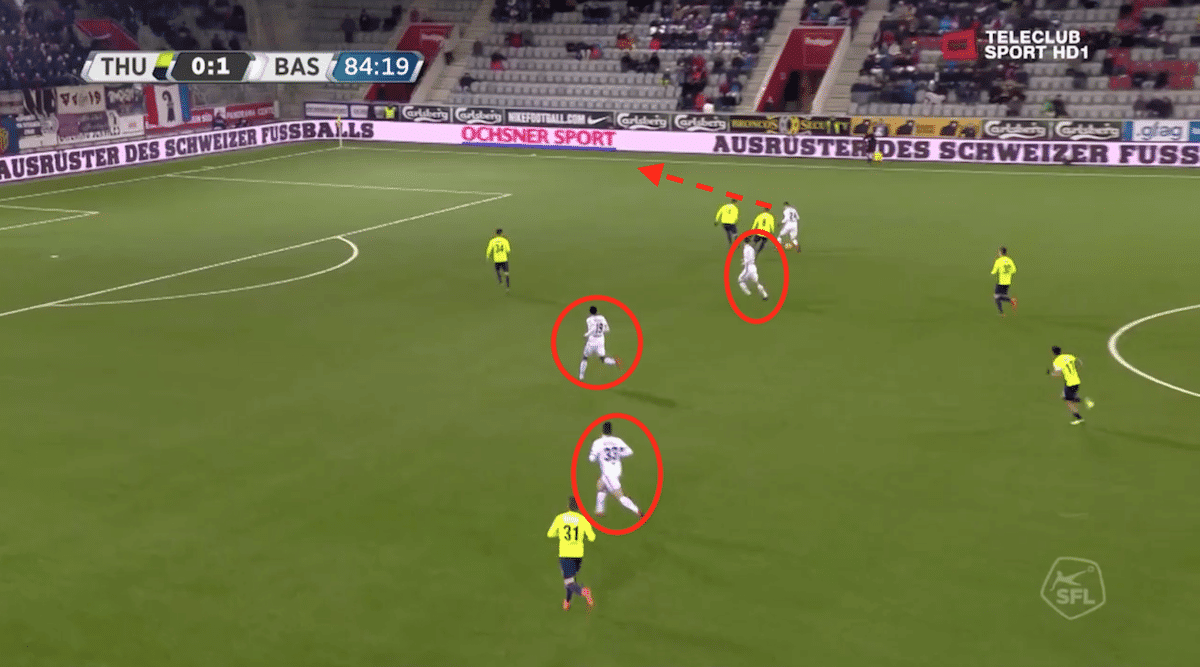 Basel went from being in a defensive formation to having four on four deep in Thun's half – all because of Elyounoussi's work rate and desire to win the ball back. He attacks the space down the right and manages to waltz his way into the penalty area, before his eventual shot is tipped wide for a corner. The finish could have been better, but take nothing away from what went before it.

Leicester may be in need of a replacement for Riyad Mahrez in the summer, but without breaking the bank. Arsène Wenger is still without a player who can fill the Alexis Sánchez void. While Elyounoussi doesn't have the Chilean's quality yet, he does replicate his tenacity, both with and without the ball, and he's a goal threat from wide areas. Southampton are without that attacking spark; Sofiane Boufal hasn't lived up to the hype and the Basel forward could help them get firing again.

All things considered, it's easy to see why Premier League clubs are keen on adding Elyounoussi to their attacking arsenal. If he's available, it's hard to imagine the three aforementioned clubs will be the only ones interested in the 23-year-old.