On paper, Ipswich should wipe the floor with Barrow but the first meeting didn't play out that way and the Tractor Boys are hardly firing on all cylinders so is a shock on the cards? Find out with our Barrow vs Ipswich match preview with free tips, predictions and odds mentioned along the way.

Barrow vs Ipswich: Our top predictions

Tractor Boys to grind out a narrow win

Ipswich haven't exactly been flying of late with their manager, Paul Cook, having been relieved of his duties recently but there is no debate to be had over who is the better team; that's Ipswich and we fancy them to win here regardless of recent results. Yes, they've not won in four but they showed great spirit to grab a point at Wigan whilst Barrow have lost three of their last five games winning just one. They've blanked in four of those games.

This game might be televised on terrestrial TV but that's doesn't mean it's likely to be a cracking game; we don't see it being that way. Each of Barrow's last seven games have gone under 2.5 whilst goals have hardly been order of the day for Ipswich of late either; their last three games, which include the first meeting with Barrow, have all fallen short of the three goal mark. It's hard to see this one being loaded with goals.

Ipswich are loaded with attacking talent but goals haven't been that easy to come by of late with their leading scorer, Macauley Bonne, going through a dry spell. James Norwood, however, looks to be in the mood after Paul Cook's sacking. Norwood was demoted to the under 23's under Cook but interim boss brought the former Tranmere man back into the fold against Wigan and Norwood duly delivered with a goal. He's been Ipswich's top scorer for the last couple of seasons and scored for fun last time he played in League Two; Barrow should be worried.

All the stats & odds for Barrow vs Ipswich

The fact we're even talking about a replay is a credit to Barrow given their standing in the league rankings considering they stood toe to toe with one of the biggest clubs outside of the Premier League. This game, however, should all be about Ipswich. They've sacked Paul Cook after a summer of investment and whilst the new boss is yet to be appointed the players have a real point to prove. Macauley Bonne has been their main man but it's the other two strikers, James Norwood and Joe Pigott, who will be desperate to impress here.

The final word on Barrow vs Ipswich 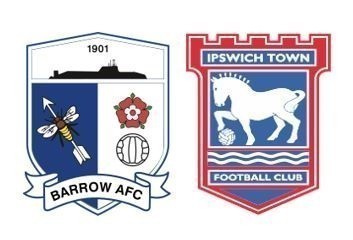