Barnsley vs Stoke: Our betting tips

Barnsley suffered what could prove a damaging defeat last time out. Will they bounce back with a win here? Find out with our Barnsley vs Stoke match preview with free tips, predictions and odds mentioned along the way.

Barnsley lost to relegation rivals Derby at the weekend but providing they can handle the mental side of things, there is plenty to be positive about. Their form of late has been much improved with three wins in their last five. Stoke meanwhile have been struggling for form; they have lost their last four games. Longer term, the Potters form makes slightly better reading with five defeats in 10 but draws have been common place too. Two of the last three meetings between these sides have ended all square as well; we think this one might too.

Backing both teams to score

Our next Barnsley vs Stoke prediction is that both teams will register on the scoresheet. Barnsley have scored eight goals in their last five home games whilst conceding in four of five. Stoke meanwhile have seen each of their last four away games end with both teams scoring. On top of that recent form, three of the last four meetings between these sides at Oakwell have ended without a clean sheet in sight.

Check out the key stats & form for Barnsley vs Stoke

Stoke might be having a poor season but they're still 21 points better off than Barnsley. That should tell you the danger Barnsley are in and there is no question who needs the points most.

Barnsley's recent turnaround in form will be tested now following a hammer blow dealt their way by Derby. If the Tykes can bounce back then a great escape remains on the cards; lose too many more though and their time in the Championship will be over.

Stoke have been in woeful form of late. There is simply non getting away from it. Four losses on the bounce and no win in six is simply not good enough. They might not need points for league safety but question marks might start to appear over the manager and some players if the slide continues.

A brief FAQ ahead of Barnsley vs Stoke 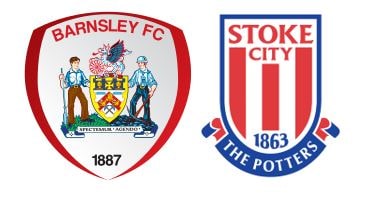