The season might only be 13 games old but relegation looms large for Barnsley already. They need a rocket up their backsides and fast. Can they get a long overdue win here? Find out with our Barnsley vs Sheffield United match preview with free tips, predictions and odds mentioned along the way.

Barnsley vs Sheffield United: Our Tips

The Blades to be too sharp for Barnsley

Don't get us wrong as we back Sheffield United to win because we don't think they're all that great. They're not in particularly stunning form either but, boy, they're better than Barnsley right now. Barnsley have lost five games on the bounce, haven't won in 11 matches and are only not rock bottom because Derby suffered a sizeable points deduction. Sheffield United at least remember what it feels like to win a game having won two in their last five. They won 4-1 on their last visit to Oakwell too.

A rather drab affair

Given the relative form of both sides a “drab affair” might be overselling how good we anticipate this match being. We are only looking at the total goals market here though rather than entertainment value. We're backing under 2.5 goals. Sheffield United have gone over 2.5 goals in three of their last five games but with a total of 12 goals scored their game average is 2.4. Barnsley have seen four of their previous five matches end south of 2.5 goals; their game average is just 1.8.

Billy Sharp to score at anytime

Our final tip for Barnsley vs Sheffield United comes in the form of a goal scorer prediction and we're backing Blades man Billy Sharp to score. He's their top scorer so far this season and will be in a confident mood after scoring in his last match. With our view that this match will be reasonably tight a moment of quality could prove the difference; usually, when Sheffield United need a moment, Sharp is their man.

Find the best odds for Barnsley vs Sheffield United

Right, team news, what can we expect? The biggest news comes out of the Sheffield United camp where there are a number of players that could make it off the treatment table to be back in contention. They include Luke Freeman, George Baldock and Oliver Burke. Morgan Gibbs-White misses out after being sent off against Millwall whilst Sander Berge remains side lined. For Barnsley, Aapo Halme could come back into the matchday squad after missing the last five; Mads Juel Andersen, Josh Benson and Carlton Morris are all out.

FAQ on Barnsley vs Sheffield United 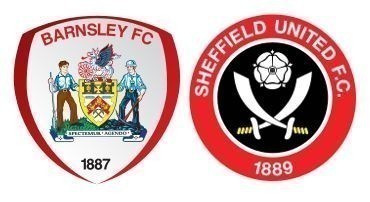