Nottingham Forest are yet to lose since parting ways with Chris Hughton. Can they carry that form into a third game as they visit Oakwell? Find out with our Barnsley vs Nottingham Forest match preview with free tips, predictions and odds mentioned along the way.

Forest to make it three unbeaten in post-Hughton era

If you're Steve Cooper and looking to build momentum as a new manager then there aren't many better teams to face than a Barnsley side that have won just one in 10. In fact, across the last five games only Hull have taken fewer points than the Tykes. For Nottingham Forest, they've taken four points from six since wielding the axe. A win here would be huge to their morale and we think they'll have enough to see off a side that are down in the dumps right now.

If you want to see predictions backed up by statistics then this one is for you. Barnsley vs Nottingham Forest is as nailed on to come in short of 2.5 goals as any game this midweek will serve up. Barnsley are averaging just 1.8 goals per match with Nottingham Forest sitting not too far ahead on 2.3. What's more telling though is that the majority of those goals have been ‘goals against'. Neither Barnsley or Nottingham Forest are even averaging a goal scored per match so the idea we see three on Wednesday is supremely unlikely. You have to go back to August 2017 for the last time this fixture served up three or more goals.

We've just touched on the fact these teams can't score goals. Well, it's not just a theme this season. The last six head to head meetings have seen at least one team fail to score. When you then assess the recent displays it just drives the tip home; Barnsley have blanked in three of their last four games including the last two. Nottingham Forest have blanked in one of their last three but have seen two of the last trio see at least one team fail to net courtesy of a clean sheet.

The top odds for Barnsley vs Nottingham Forest

It's almost impossible to believe that Barnsley were in the playoffs just a few months back. It's a distant memory now and, if form doesn't turn quickly, they'll soon be fully embroiled in a relegation battle. Six goals scored from nine games is frankly pathetic and it's something that needs to chance sharpish. You have to wonder when Devante Cole will be given a crack. He's barely made it onto the grass this season but eight goals in 22 appearances for Motherwell last season suggests he knows where the net is. For Nottingham Forest you can largely dismiss their form prior to the managerial change. Steve Cooper, who has overseen one of the two wins since Hughton was dismissed, will be hoping to get that new manager bounce. James Garner and Joe Lolley could both have big roles to play. 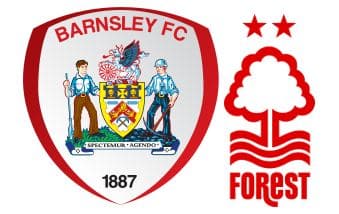