Barnsley have made an unbeaten start to the 2021/22 campaign after a good season last year. Can they keep the momentum going when Luton Town visit? Find out with our Barnsley vs Luton Town match preview with free tips, predictions and odds mentioned along the way.

Barnsley have made a really solid start to the Championship campaign and despite exiting the cup last week are now unbeaten in three matches as of the 90 minute mark. The same cannot be said for Luton Town; they made a barnstorming start last weekend as they thrashed Peterborough but after exiting the cup (also via penalties) and losing at West Brom a visit to Barnsley isn't the ideal fixture. Barnsley have lost just one of their past five home matches; they've won three and drawn one – that was against last seasons Champions, Norwich. As for Luton Town's away form; it's not woeful but they've not won away for three competitive games.

A look at Barnsley's most recent results doesn't scream out for a game to be full of goals with the fact that just two of their last five matches have gone over the 2.5 threshold; Luton Town's form, however, quickly balances the scales with their last four all seeing at least three goals. The final clincher for our tip is the head to head; four of the past five meetings that have taken place at Oakwell have seen over 2.5 goals.

Another win for Barnsley but no clean sheet

We've already touched on the decent form Barnsley have shown; behind it has been some fairly robust defending with the hosts only conceding three goals in their last five competitive matches. We expect that to change here though with Luton Town unlikely to be brushed aside easily. Take their recent defeat to West Brom as an example, at 3-0 down they were dead and buried but they came back swinging and eventually only lost out 3-2. It's that spirit combined with the fact they've scored 11 in their past five competitive fixtures that make us think Barnsley will have to score at least two to win this match.

Barnsley to emerge victorious but not without a fight

At the start of the campaign there were some concerns as to how Barnsley would cope with their change of manager and loss of Alex Mowatt; the answer to those questions so far is ‘just fine'. They're out of the League Cup but an away point and home win from the first two game weeks is a cracking start. For Luton Town, they've made an okay start. They eased to three points last week and although they lost to West Brom the fight they showed not to give in at 3-0 down will please Nathan Jones no end. They might have Dan Potts back from injury for this one too although Barnsley will still be without Obbi Oulare and Mads Andersen.

Final thoughts ahead of Barnsley vs Luton Town 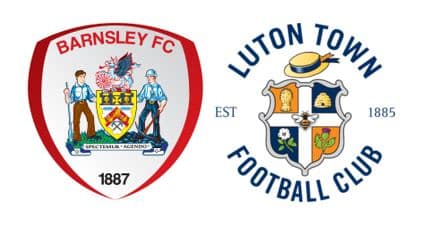