Life hasn't got off to the best of starts for new Barnsley boss Alex Schopp who is without a win from his two competitive matches. Can he make it third time lucky? Find out with our Barnsley vs Coventry match preview with free tips, predictions and odds mentioned along the way.

Our first prediction backs Barnsley to beat Coventry but, to be honest, it's not exactly based on the form in competitive fixtures. What we have considered is the fact that Barnsley recorded a couple of good wins in pre-season and will be playing in front of home fans for the first time in a long time. On top of that Coventry have lost five of their past six in all competitions whilst the head to head record shows that the away side haven't won in nine attempts; it's even longer than that if you focus on league meetings.

A game without too many goals

We've already touched on a rather unique head to head statistic and we're keeping on the h2h front now; the last two meetings between these sides have come up short of the 2.5 mark with the game average over the past five meetings being just 2.2 goals. In terms of recent form, Coventry have seen two of their last five competitive matches end south of 2.5 whilst Barnsley's last four have all ended with fewer than three goals. With the head to head record and Barnsley's form the odds of 20/29 still offer value.

A ‘nil' to feature in the score line

If we were being more ballsy with our tips we might have backed Barnsley to run out 1-0 winners but we've opted to take a slightly more cautious approach by going for ‘BTTS – No'. Barnsley's last five have seen both teams score on just one occasion; in three of those instances Barnsley have recorded the shutout. For Coventry, three of their last six have ended without both teams scoring. Those three games have all seen Coventry lose.

The best odds for Barnsley vs Coventry

A dull game but happy days for Barnsley

Barnsley had a good season last year but ultimately fell short in the playoffs. Since then it's been a familiar feeling with their manager, who had done a good job, moving on and the next chapter in their history kicking off; this time they're doing it without their main main in Alex Mowatt as well though after hem left for West Brom. They've not started the season in great shape but there were enough signs in pre-season that they could have a decent year; they'll need to face Coventry without Mads Juel Anderson though. He's out injured.

As for Coventry, they ended last season really well and picked up where they left off in league terms by beating Nottingham Forest on opening day. Martyn Waghorn, who arrived on a free from Derby, could prove a really smart acquisition and he'll be a threat to Barnsley's backline in this match.

FAQ for Barnsley vs Coventry 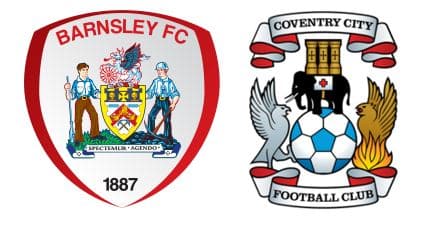