Barnsley vs Birmingham is a match where you'll find it hard to hang you hat on either side with both having mixed starts to the campaign. Will they be separated on Saturday? Find out with our Barnsley vs Birmingham match preview with free tips, predictions and odds mentioned along the way.

Barnsley arrive in this match as favourites but we're actually backing Birmingham to leave with the three points. The hosts have only won one of their last five matches with their previous outing seeing them blow a two goal lead; it's plausible such a result will play on their minds for a little while. Birmingham aren't exactly flying and we're knocked out of the cup on Tuesday. Despite that, it's hard to ignore their last league performance, which was a first class performance against Luton. If that Birmingham turn up in form anything like that, they'll win.

The odds associated to the under 2.5 goals bet means this prediction comes with real value when you consider that stats of both sides. Barnsley's 2-2 last time out was the only one of their past five to have gone over 2.5 goals. As for Birmingham, four of their past five have been short of the three goal mark too. Even with both teams having had one high scoring match in those five game periods, game averages read well. Barnsley's is 1.6 with Birmingham's at 2.0. Four of five head to heads have seen under 2.5 too including this fixture from last season.

Our final tip suggests that at least one of these sides will fail to hit the net during the game. None of Birmingham's last five matches have seen both teams register on the scoresheet. For Barnsley, only two of five have seen both teams score. Again, as with the under 2.5 tip, the head to head record has four of the last five supporting the BTTS ‘No' prediction.

The best odds for Barnsley vs Birmingham

A low scoring match where Birmingham come out on top

The key to success at any level of football is consistency. At the moment neither Barnsley or Birmingham are showing that hence their respective returns of seven and five points from 12 in the league. Both have players of quality in their ranks as well though. For Barnsley, Dominik Frieser is the goal getter and has two goals in his last three outings. Where Birmingham are concerned, they'll be hoping Scott Hogan can get on a roll after bagging a brace in that crushing 5-0 win over Luton.

Pre-match Questions for Barnsley vs Birmingham 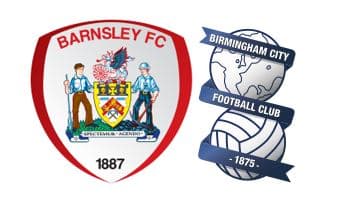