Barnsley vs Barrow: Our betting tips

Barrow knocked out League One Ipswich in the last round of this competition so are no strangers to giant killings. Can they claim another scalp here? Find out with our Barnsley vs Barrow match preview with free tips, predictions and odds mentioned along the way.

Another replay for Barrow

To claim Barrow's form has been good would be a bare faced lie. What has been impressive is their ability to get to this stage of the FA Cup easily struggling in League Two. They looked a really decent outfit as they won their replay against Ipswich in round two and we think they'll take Barnsley to a second game as well. The Tykes are in a really bad spot themselves having gone eight without a win and if they're not bang at it in this game it could become a real banana skin.

Goals will be in limited supply

Neither of these sides are doing very well in their respective leagues and that means the quality on show when they meet is likely to be somewhat lacking. That probably means we'll see very few goals hence our under 2.5 prediction. Barrow have only gone over that mark once in their last 10 games whilst Barnsley have a 50/50 split across their past 10 matches. Given Barrow Will look to sit in, it will hardly be set up for classic entertainment.

Check out the key stats & form for Barnsley vs Barrow

Both of these are at risk of relegation with their league form ropey to say the least. A cup run could be a distraction from getting points on the board or could be seen as the catalyst to pull to safety. Regardless of our view on that, both sides will be seeing this as a game where they can get a result.

Barnsley are in turgid form at the moment having taken just three points from the last 24 available in the Championship. A win here would be a small confidence boost but they do have the problem of being the big side; win and it's expected. Lose and it's a disaster.

As we've already said, Barrow have claimed a big casualty already in their cup run knocking out one time winners Ipswich in the last round. They're never going to win the cup themselves but with the risk of relegation out of the football league looming large a place in round four would be huge for the club both on and off the pitch.

A brief FAQ ahead of Barnsley vs Barrow 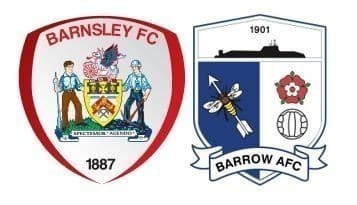