When you've got two teams facing off that can serve up a combined six wins from their past 20 matches it hardly screams out “classic” but at least the pressure if well and truly off for both Barnet and Maidenhead. Who though will grab the win? Find out with our Barnet vs Maidenhead match preview with free tips, predictions and odds mentioned along the way.

Barnet vs Maidenhead: Our tips

To be honest despite Barnet suffering relegation and Maidenhead guaranteed to finish somewhere between 12th and 16th there isn't much to choose between the sides of late; both have been poor. Barnet have drawn one, won one and lost three of their last five with Maidenhead offering up exactly the same albeit in a different order. They are both, however, on four game winless runs. The reason we lean towards Barnet is the fact that they've a) just had relegation confirmed so the pressure will have lifted and b) because Barnet have beaten Maidenhead in four of the last five meetings between the duo.

How to we go about justifying this under 2.5 goals prediction when both sides have averaged more than that per match across their last five? Well, it's quite simple really. Let's begin with the fact the head to head record between the two. Last time out, which was only in April, they served up a turgid 0-0 draw. That means that four of the last five meetings have ended south of the 2.5 cut off. The other reason we're backing the total goals to come in short of where they've been averaging of late is because they're playing each other. Barnet have seen 15 goals in their last five but they've only been responsible for scoring five of them. Their defensive record might be of concern if they weren't facing a Maidenhead side that have scored one goal in their last four. Neither side a great at the back but nor do they have the quality to punish one another.

Someone will bag themselves a clean sheet

Yeah, our final tip follows on from the previous prediction; neither side possesses much attacking threat. Barnet have only scored in five of their last 10 matches with six of those 10 seeing at least one side blank. Maidenhead have also seen six of 10 where at least one team has ended the game with a ‘nil' to their name; they've been that side on five occasions. It's tough to see them trading blows too heavily as they meet.

Barnet vs Maidenhead: Your guide to the best odds

You might want to find something else to watch

We don't want to come across as being too negative about a match of football but teams like Barnet and Maidenhead don't really give us much choice. Neither have anything to play for – other than pride – and both are in poor form both in respect of results and goal scoring. It is hardly a game for the ages. At least our predictions might help keep you interested.

Barnet vs Maidenhead: Before you go 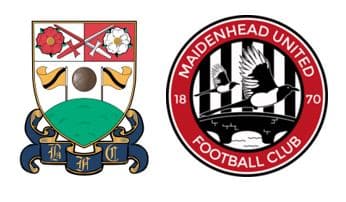