After what will have been a difficult week off the pitch for Ross Barkley, he did his talking on it against Burnley at the weekend, starring in a convincing win Everton.

It was a real ‘point to prove' performance from a player that has had to respond to criticism more than most of his age, and even from his own manager earlier in the campaign.

There's no question this has been a season of genuine progression from the 23-year old. Some would say it's overdue but the case remains that Barkley deserves praise for improving his consistency and creativity under Ronald Koeman.

His season will no doubt be remembered by many for two Merseyside derby performances that are memorable for the wrong reasons. But there's little doubt as to the cause of his hot headed displays.

Barkley is a local lad after all. A blue that intimately understands the importance of beating red. He was lucky not to see the latter in both matches as his passion spilled over into aggression but to suggest Barkley is a dirty player is unjust.

He's not a good tackler by any stretch, but when Liverpool aren't involved there aren't too many instances of foul play in his past.

What's become more prominent in his game is an understanding of when to play a pass in the final third. The frustration fans and managers alike have had with Barkley lies in his decision making.

He's powerful in possession but perhaps lacks the elegance to compliment his skill. He can do a roulette or drop of the shoulder but at times his touch lets him down.

Koeman, who is known as a strict disciplinarian, has tried to make Barkley appreciate when to run with the ball and importantly when to release it.

His total dribbles per game this season (2.8) are at a low since becoming a first team regular as a result – down from 4.8 last season – but his chance creation is up significantly.

An average of 2.5 key passes per game is an all time high for Barkley, and by a distance for a player that was far less creative prior to this season than many gave him credit for. 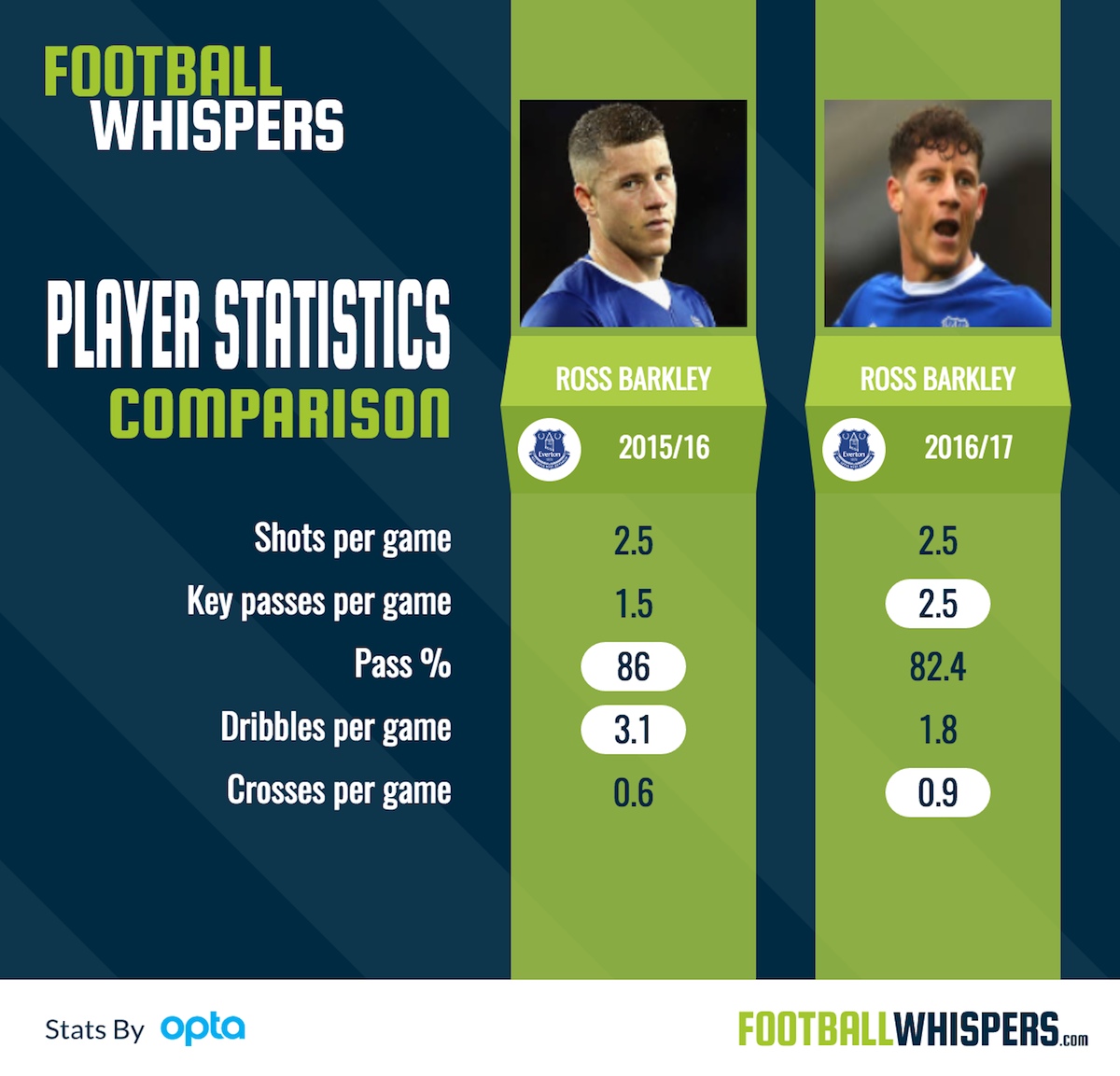 In fact, there's an argument to be made that prior to this season Barkley, who was rightly identified from an early age as a real prospect, was actually overrated to now.

It's perhaps only now that he deserves to be considered as a player that is capable of carrying the responsibility he has had to shoulder for some time at Everton.

He's created the third most chances and most of any Englishman this season (77) – already 21 more than last year by comparison – and registered more assists (8) than any compatriot as a consequence.

In his first two seasons there was too much expectation on him, while the less said about last season as far as Everton are concerned, the better.

Barkley actually posted impressive figures of eight goals and eight assists but while he was able to showcase his ability in attack, the complete lack of defensive organisation and training could have been to the detriment of his development.

In that sense the harsh rule of Koeman has been ideal. Barkley has been forced to think about the consequences of his actions on the pitch and his positioning off the ball, safe in the knowledge that a real rollocking will await him should he neglect his manager's orders. 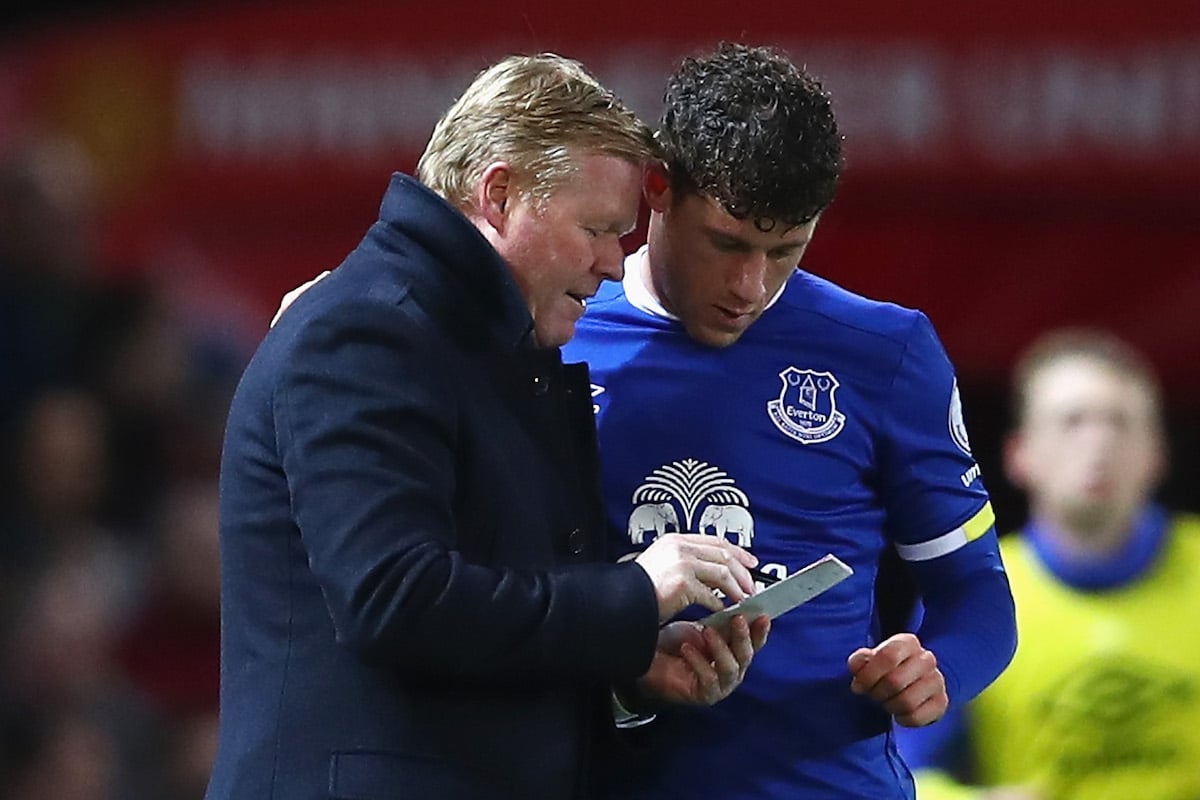 It's this in-game intelligence that has needed to improve if Barkley is to finally convince an England manager that his inclusion isn't a gamble.

You can compare and contrast to a player like Adam Lallana, whose awareness of those around him sees him retain possession in areas that Barkley would previously concede it. He's 23 though, so that's to be expected.

The worry for Barkley is that he will forever be considered a luxury player. He has a reputation for losing his head in big games, be that in terms of losing his cool or his concentration, and it's one that will take a long time and a season of less controversy and incident than this to shift.

No player is perfect though and while we'll accept the same if not worse cases of violence from Dele Alli, that's because he is unquestionably a better player. It's that simple.

Where the Spurs man's promise, like Lallana's, was able to fly under the radar in the Football League, too much has been expected of Everton man for too long and he's understandably struggled to cope with the pressure.

The bar needs to be reset for Barkley, who is a very talented player and one that can undoubtedly play an important role for club and country.

With regards to his current lack of action for the latter, unfortunately for Barkley there are better players in his position right now. That doesn't mean that he doesn't deserve recognition for a season that could serve as a platform to proving his doubters wrong.