Ross Barkley's career is currently in limbo. The 23-year-old is sidelined with a hamstring injury and not due back until the middle of November.

But he reportedly walked out of his Chelsea medical on deadline day despite the fact he'd burnt bridges with Everton and the Merseyside club had already replaced him with record signing Gylfi Sigurdsson.

Barkley made it clear he wanted out but clubs were reluctant to meet the £50million price tag slapped on his head, especially with him having just 12 months remaining on his contract.

His stock is at its lowest. But Spurs manager Mauricio Pochettino, a long-term admirer of the versatile midfielder, is reportedly still determined to bring Barkley to London and polish him into the diamond he clearly believes he could be.

According to the Daily Mirror, Tottenham are set to go head-to-head with Chelsea again in January for the out-of-favour Everton midfielder.

Spurs are favourites for a number of reasons. One of which being Barkley has already rejected the opportunity to join the champions. That, coupled with Pochettino's track record of developing players, puts last season's runners-up at the front of the queue.

While it was initially thought Barkley would arrive to bolster the attacking ranks at the club, the report suggested that the ex-Southampton manager sees Barkley in a deeper role. Perhaps as a rival to Mousa Dembélé.

The Belgian playmaker is a huge asset to the Spurs squad and the club have no other player like him. But it's hard to build a midfield around Dembélé due to the concerns over his reliability. He missed a number of games last season due to injury and he's been absent from the last five matches.

Furthermore, he's 31-years-old at the end of the season, July to be accurate, and isn't going to play on forever, especially not when he's plagued by various injuries.

So could Pochettino view the explosive box-to-box Liverpudlian as a replacement for the elegant former Fulham man? There's definitely something there for the Spurs boss to work with. 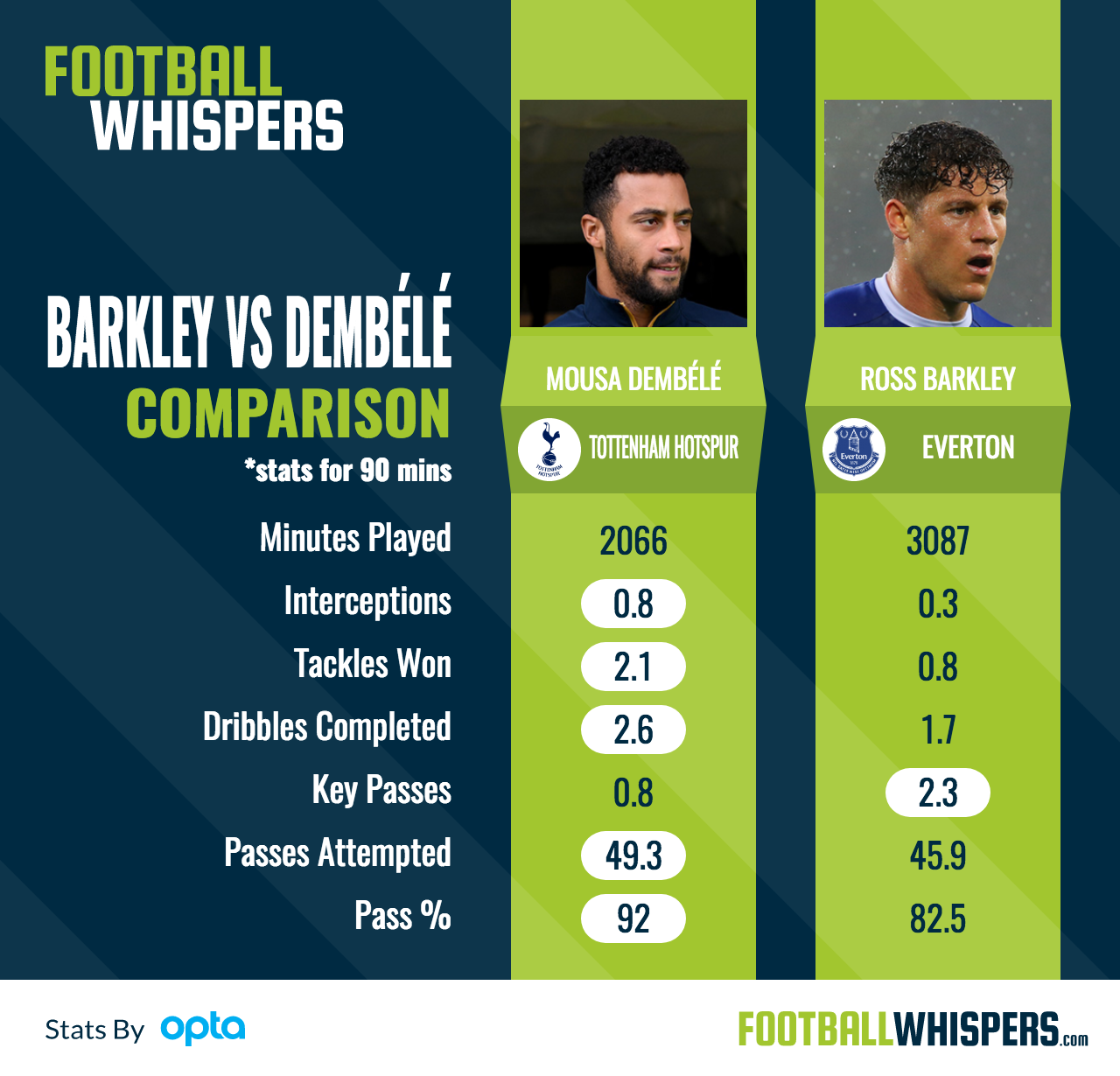 The graphic above compares Dembélé's 2016/17 stats to those of Barkley. It helps build up a picture of how the two compare but at the same time context needs to be taken into account. The Everton man was shifted around by Ronald Koeman and didn't really have a set position.

The fact he was regularly operating in a different part of the pitch no doubt had an impact on his overall stats.

For example, when used in a wide area he may have been tasked with just getting the ball into the penalty area to increase Romelu Lukaku's chances of scoring as opposed to dribbling past players, meaning his completed dibbles stats would've taken a hit.

Likewise, when in wider areas he's not going to be making as many tackles as he would centrally. Similarly, he completed more key passes than his Spurs counterpart but how much of that is down to where he was playing on the pitch? He was a final third player whereas Dembélé was operating in the middle third.

It ties in with his pass completion stats, too. The Belgian kept things ticking over but that doesn't necessarily mean he was playing safe passes like some might imagine, just safer than the ones the Everton man was trying to execute.

After all, Barkley was the man responsible for creating chances for the Toffees.

It's good to see how the Everton No.8 fared in various roles but you shouldn't read too much into the comparison stats.

Watching Barkley play, however, gives you an idea of why Pochettino may feel he can rival Dembélé for a starting role at the heart of the Spurs midfield. He brings the same dynamism and acceleration to the middle third but is also more of a goal threat. 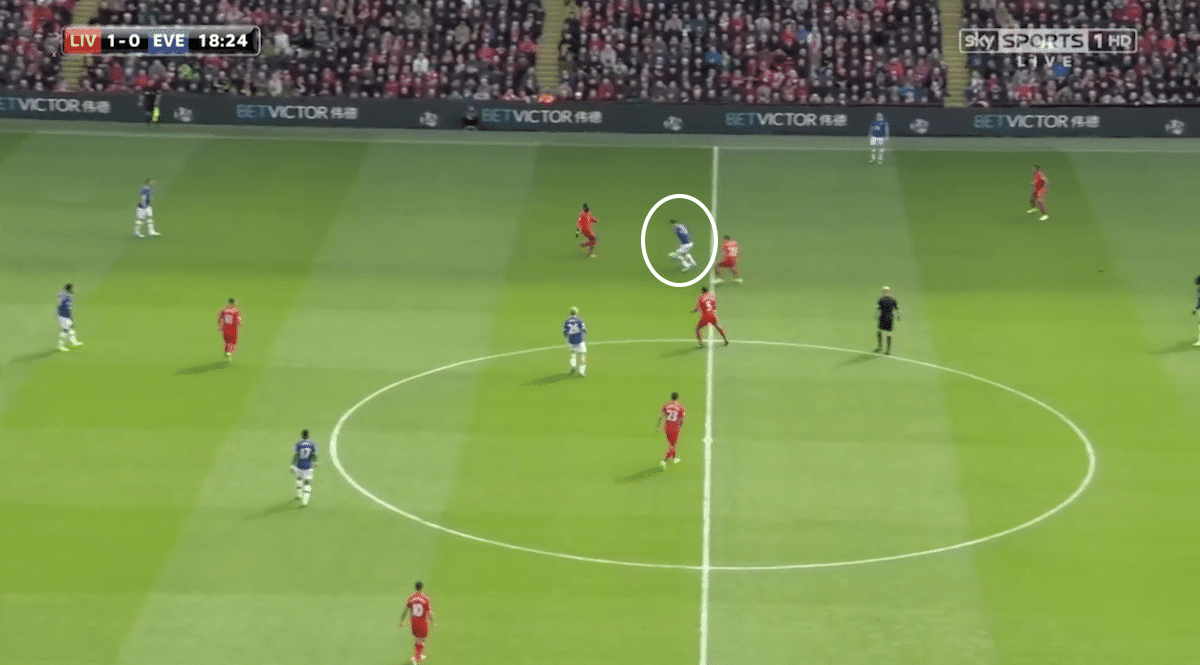 One of the many reasons Dembélé is so invaluable to the Spurs starting XI is because of just how press resistant he is. Teams can swarm the midfield but the Belgian, as composed as ever, manages to wriggle into space and retain possession for his team.

Barkley has a similar quality. In the picture above you see him receive the ball and straightaway he's under pressure. Sadio Mané is closing him down and Lucas Leiva is looking to win the ball back and get Liverpool on the counter with the Reds having five players in the Everton half, all ready to pounce. 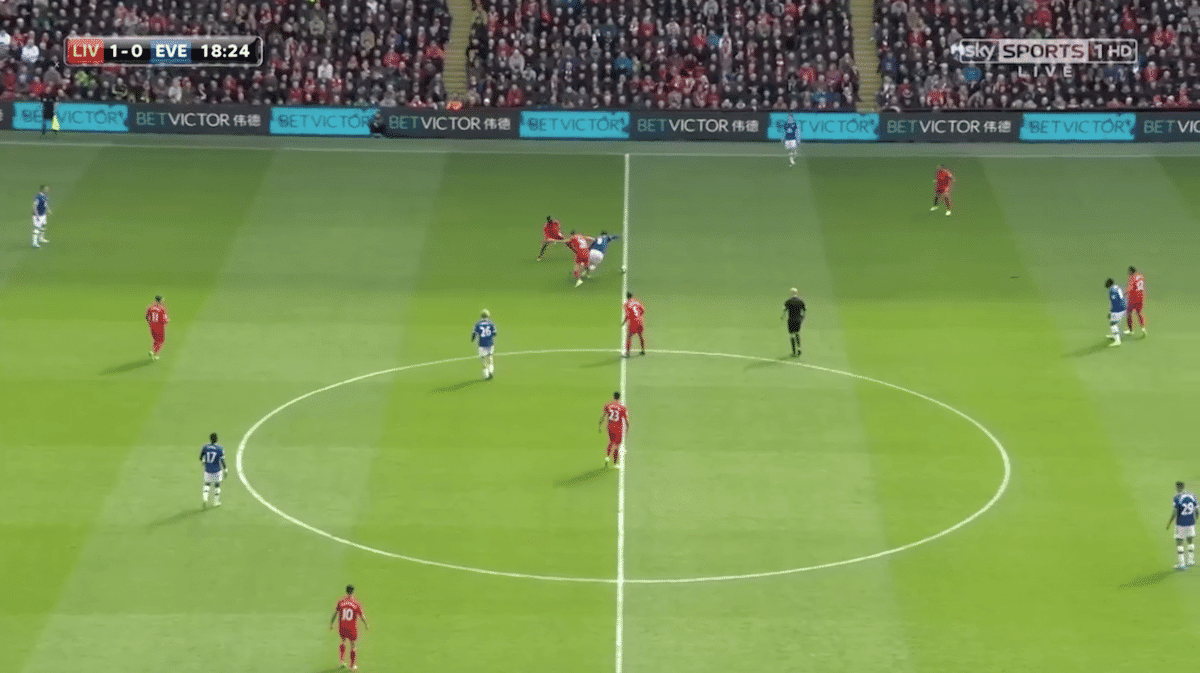 Barkley, despite tackles from front and back, manages to free himself.

He doesn't just do that though, he ensures he's driving into space and away from Liverpool players in a central area. It shows his intelligence. 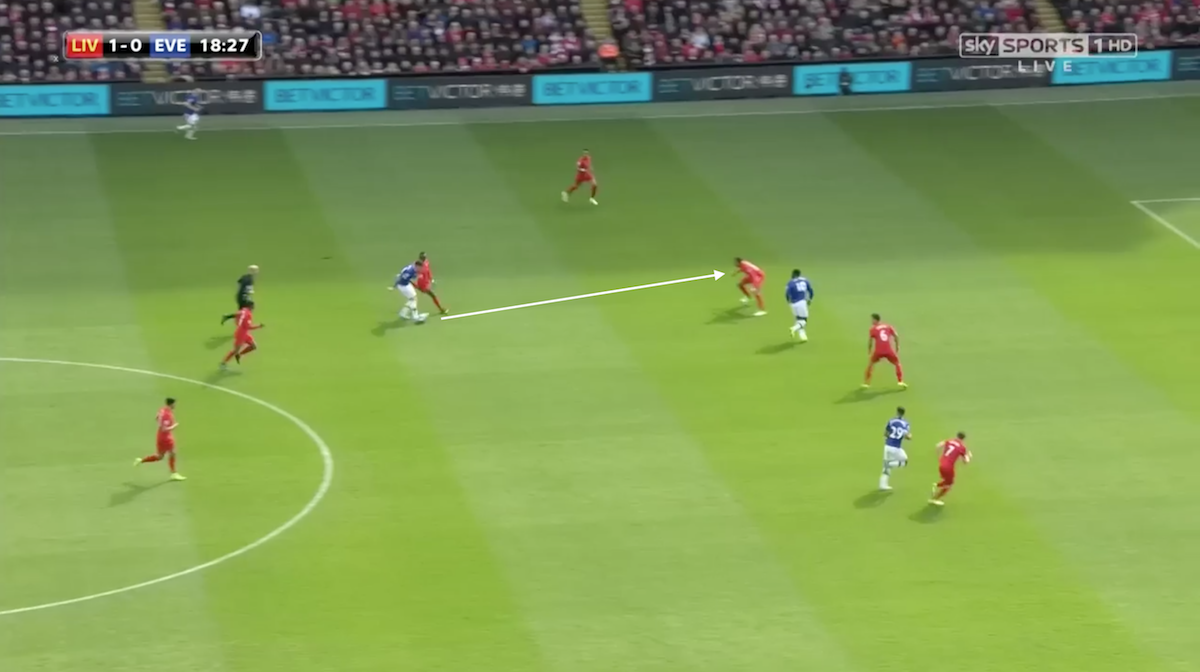 He then drives into the space ahead of the Liverpool defence, tracked closely by Mané, and attempts to thread a ball through to Lukaku. However, Joël Matip's gangly right leg prevents it from reaching it's final destination.

What went before the pass gave a glimpse into what Barkley would offer in a more withdrawn role, and why Pochettino feels as though there's enough there for him to work with and develop.