Barcelona have a long and proud tradition of taking promising youngsters into their La Masia academy and developing them into stars of the first-team.

However, with Munir El Haddadi shipped out to Valencia to make way for Paco Alcácer’s arrival, and dynamic forward Sandro Ramírez deemed surplus to requirements last summer, the youngsters within Barça’s set-up could be forgiven for thinking their prospects of becoming a Camp Nou hero are not as favourable as in previous years.

But hope comes in the form of 19-year-old Carles Aleñá, labelled the “new Iniesta”.

Currently starring for Barcelona’s B team, the gifted midfielder idolises the Spanish international playmaker he has been compared too, and there are high hopes in Catalonia that the teenager will someday take over from the current captain.

So outstanding are Aleñá’s talents that he has attracted admiring glances from overseas, with Manchester United manager José Mourino said to be a fan. But it is interest from bitter rivals Real Madrid that will have Barça most worried.

As reported by Diario Gol this week, Los Blancos are set to launch a bid to steal Aleñá away from the Camp Nou, with representatives from 11-time European champions having made contact with the player’s family over a potential switch to the capital.

Aleñá's allegiance lies firmly with the Blaugrana, but that won’t stop several top clubs sniffing around the highly-rated teenager.

So what is it about Aleñá that makes him so special?

Usually, being compared to a world-class star and all-time great such as Andrés Iniesta would be difficult for any young player to live up to. But, stylistically speaking, it’s hard to ignore the similarities between the two Spaniards.

Arguably Aleñá’s greatest strength is his ability to receive the ball in tight areas, absorbing pressure and opening up space for his team-mates — playing as an interior in Barça’s three-man midfield, this is an invaluable asset.

The 19-year-old has a remarkable knack for taking possession in a crowded zone or when tightly marked, and coming away with the ball, making a beeline for open space and playing an accurate pass to a colleague. 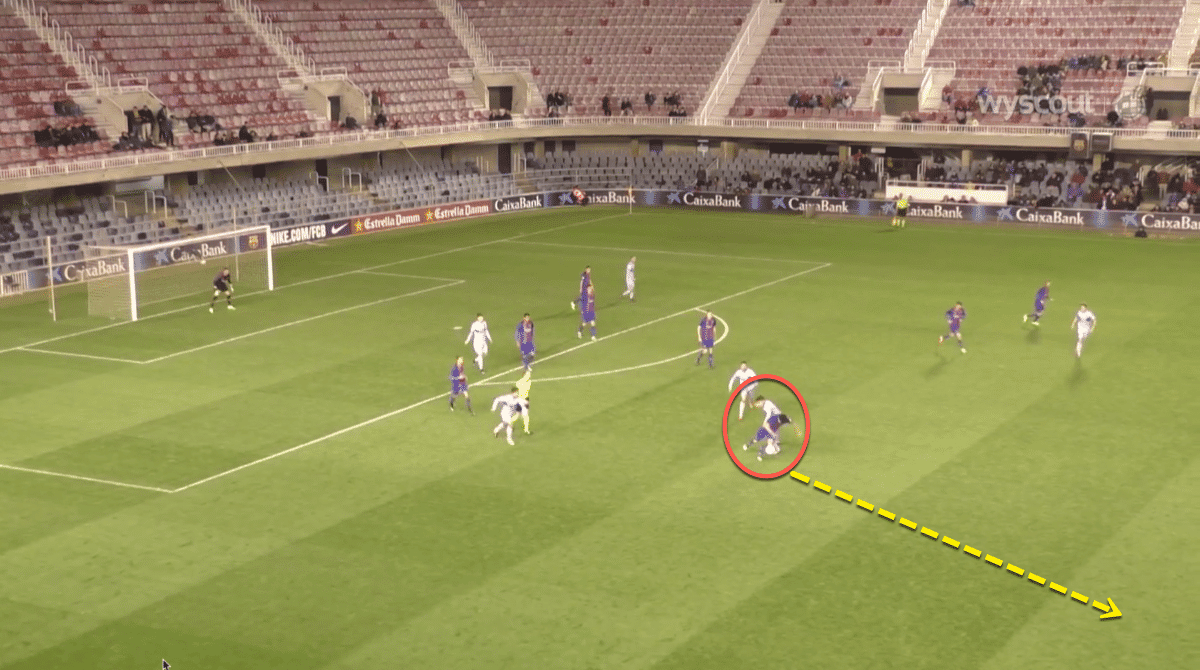 In this sequence, we see Aleñá pick up the ball on the edge of his own penalty area and exercise tremendous body positioning to prevent his marker from being able to make an effective challenge. 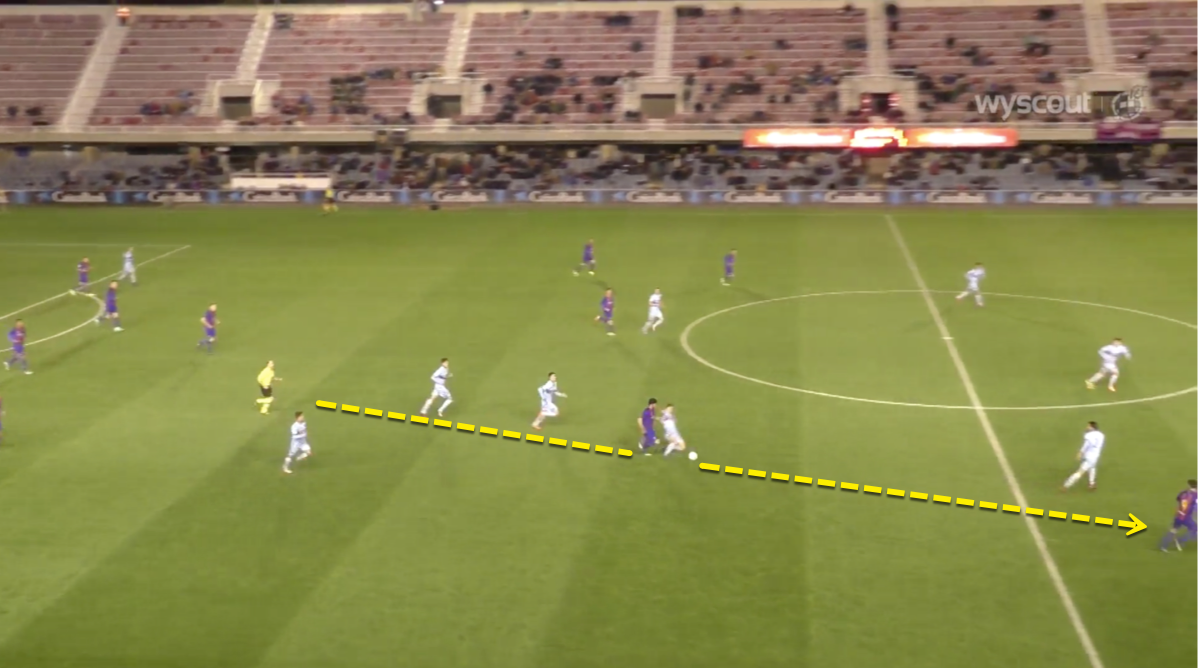 He bursts forward into midfield, skipping away from a desperate sliding tackle before driving on into the opposition’s half of the pitch. 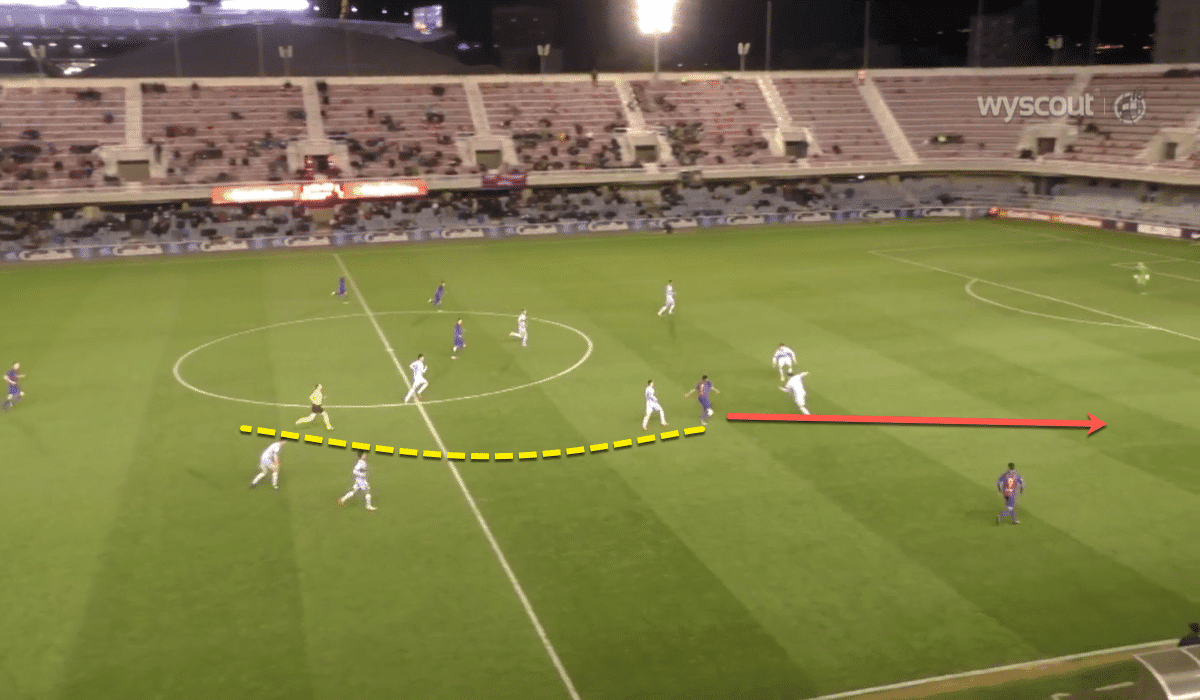 As he nears the attacking third, the backtracking defenders start to panic and rush towards Aleñá in an effort to close him down. By drawing pressure in this way, the Barça prodigy sucks in three opponents, creating space for the striker who has pulled wide. At the opportune moment, the Iniesta-like youngster plays a perfectly-weighted ball to his team-mate, who now has acres of space to exploit.

Aleñá’s recognition of space is outstanding, and appears to be an innate, natural instinct rather than anything that has been coached. It is this appreciation of openings that guides his mature decision-making.

The Spain under-19 international seems to pick the right pass, at the right time, whenever he has the ball at his feet. He is also able to not only position himself optimally, but manoeuvre his team-mates into areas from which they can be most effective; this ability to raise the level of everyone around him is an X-factor that separates good players from the elite, and it is all powered by a natural spatial awareness. 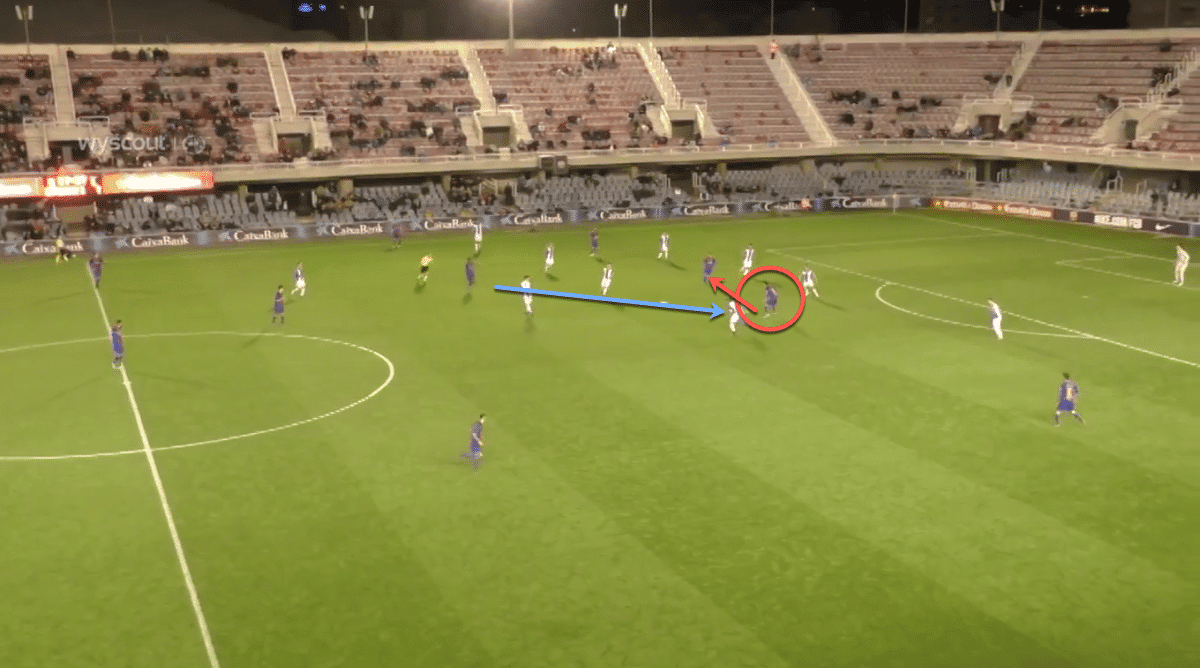 This time, Aleñá receives the ball with his back to goal. Like any good playmaker, he has already mapped out his surroundings and knows his next three moves ahead of time. 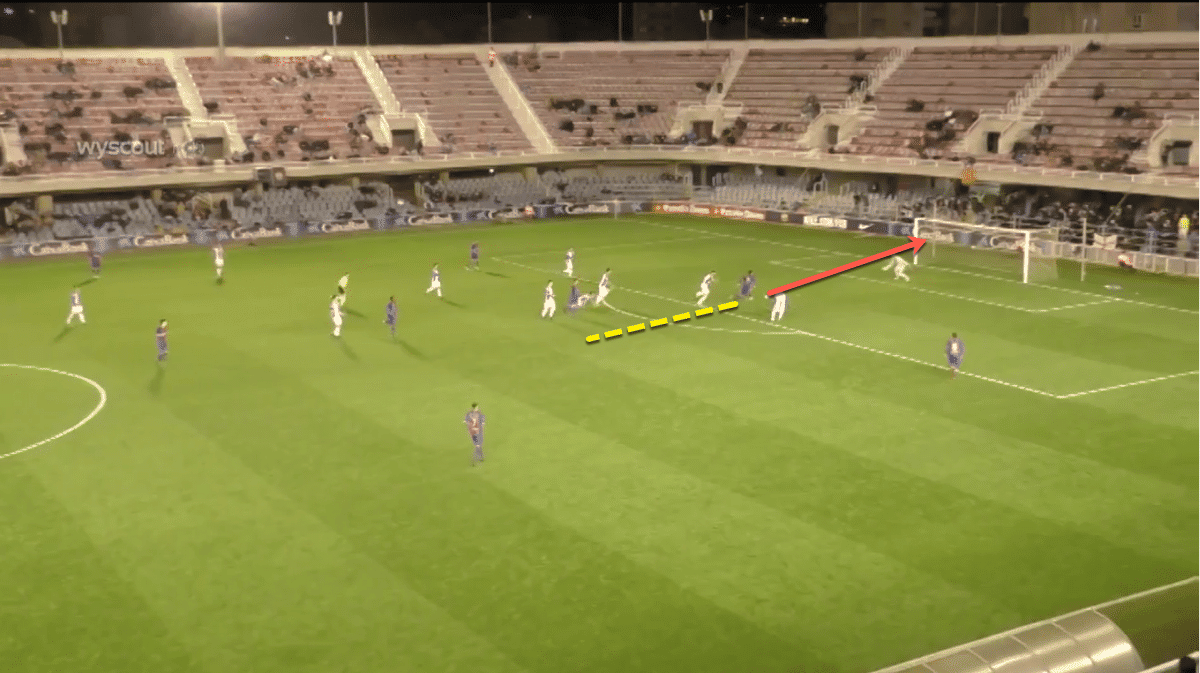 read more: how does barcelona target ousmane dembélé compare to the MSn?

He lays a first-time pass off to a team-mate before breaking beyond his marker and into the penalty area. Knowing that an accurate return pass will see him through on goal, he has already sized up the goalkeeper and produces an accomplished finish.

Although Barcelona have undergone stylistic shifts through the years, passing and the rapid circulation of possession has remained a core tenet of the club’s playing philosophy; the ability to pick out a red and blue shirt on a regular basis is key to any player’s success at the Camp Nou.

Whether short or long, left foot or right, Aleñá is accurate and creative with his passes. 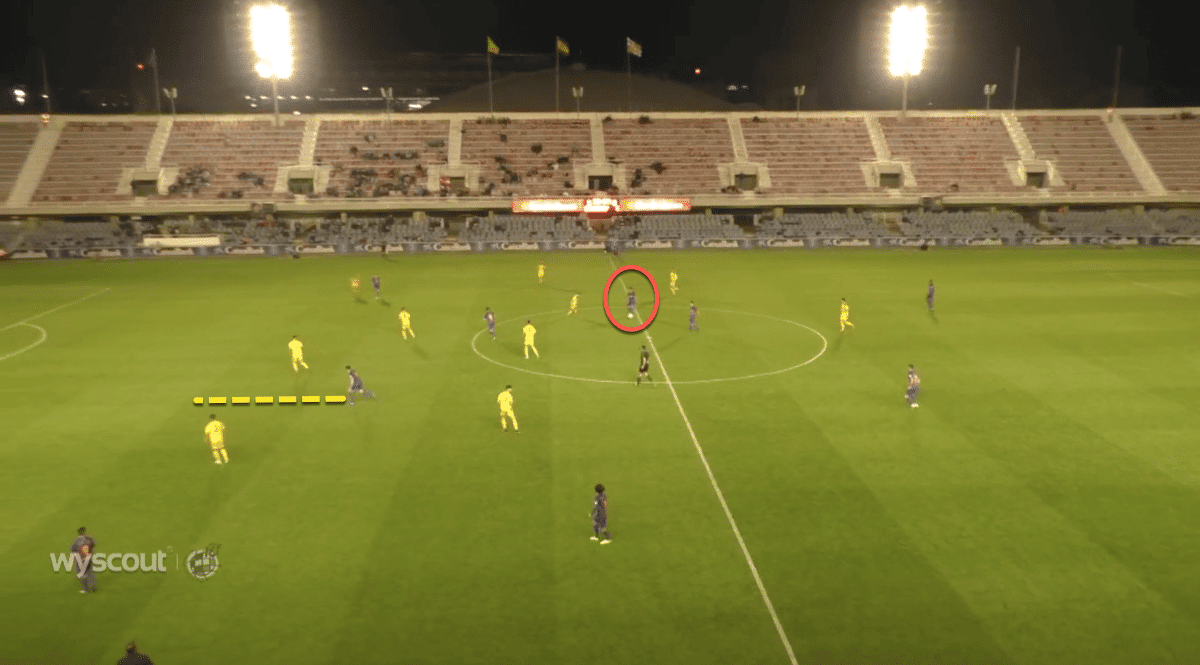 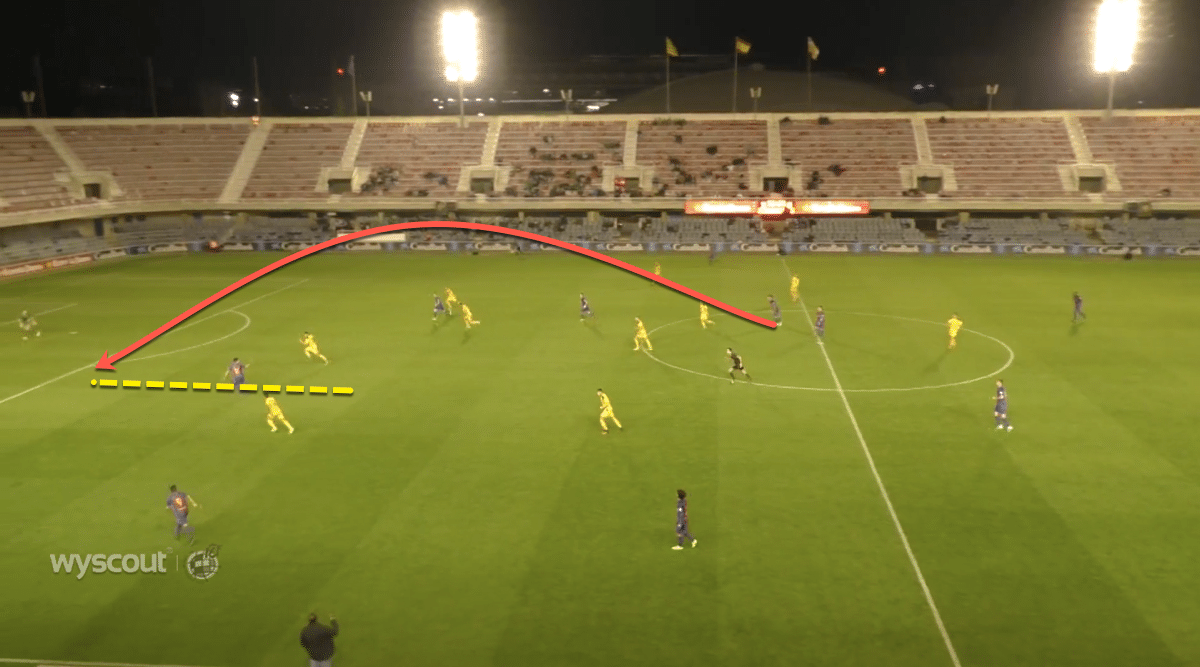 In the above sequence, the midfielder picks up the ball on the halfway line, turns and spots the forward run of a colleague. Without a second’s thought, he draws back his wand of a left foot and lofts a beautiful 40-yard pass into his team-mate's stride. 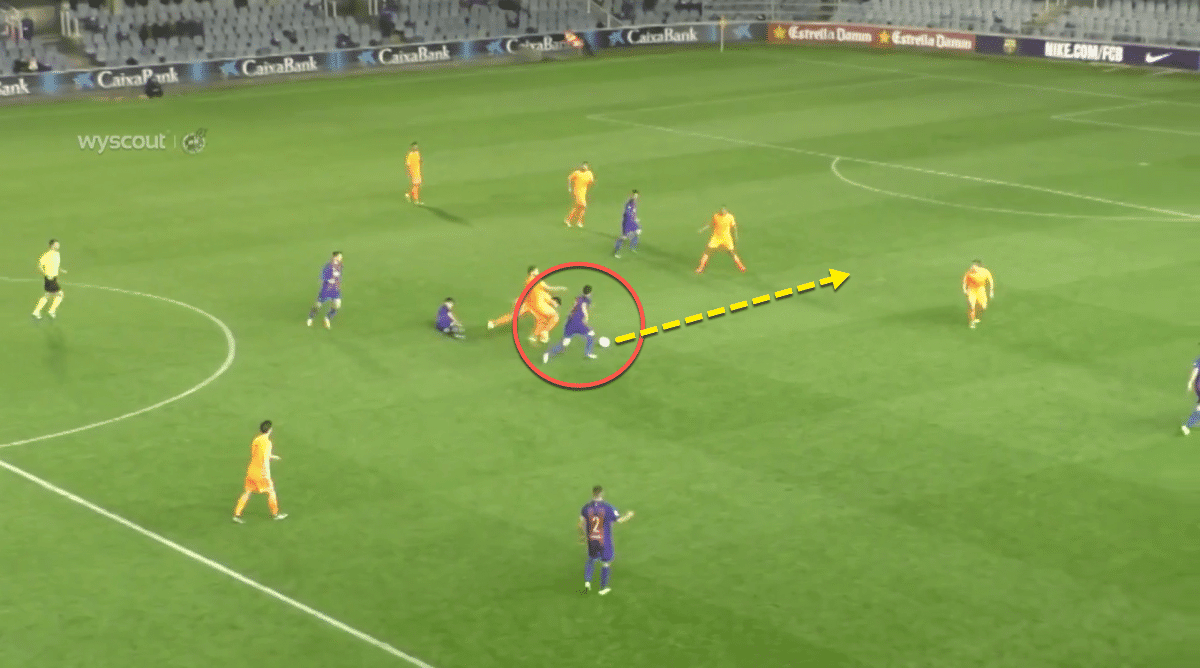 This time, we see Aleñá pounce on a loose ball in midfield. His driving forward run attracts the attention of the opposition’s backline. The Barça striker begins to make his move, recognising that if his run is good, his gifted team-mate will find him. 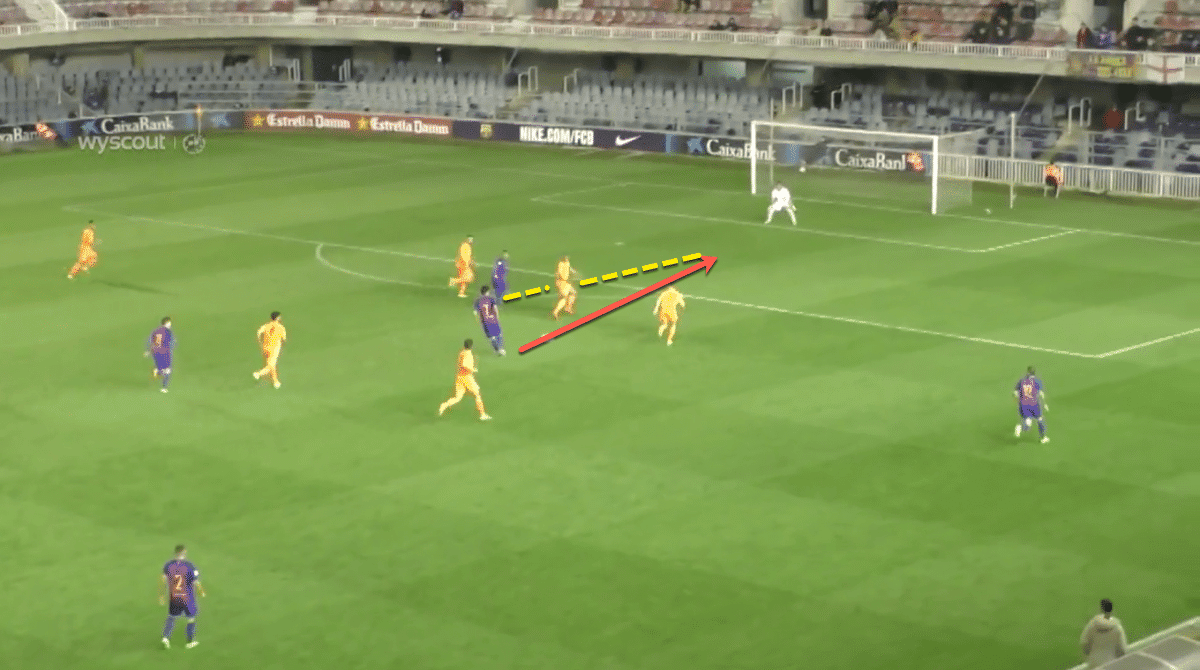 Aleña’s slotted through-ball rolls onto the exact blade of grass which gives his team-mate the best chance of scoring; the striker duly obliges.

A confident and precise striker of the ball, Aleñá is unafraid to try his luck from distance, utilising a clean and crisp striking technique as he aims for goal. 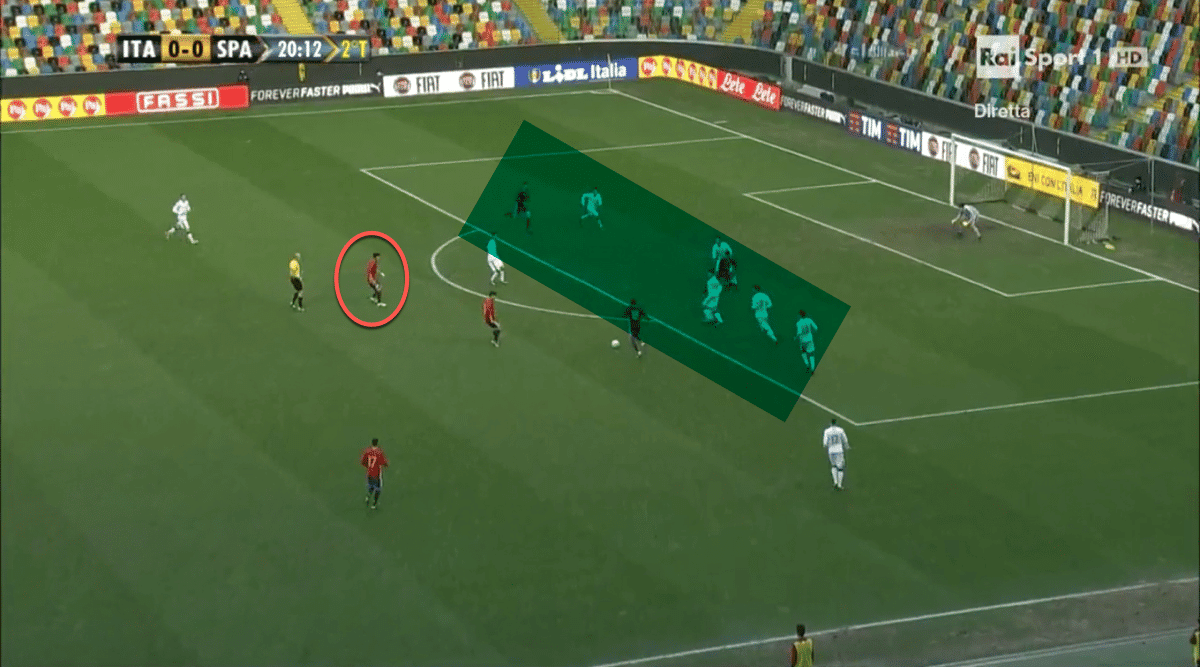 Here we see the teenager in action for the Spanish under-19 side. As the winger dribbles inside, Aleña’s awareness sees him recognise that the central zone on the edge of the 18-yard box is crowded. Rather than break forward, he halts his progress, giving himself a few square metres of space. 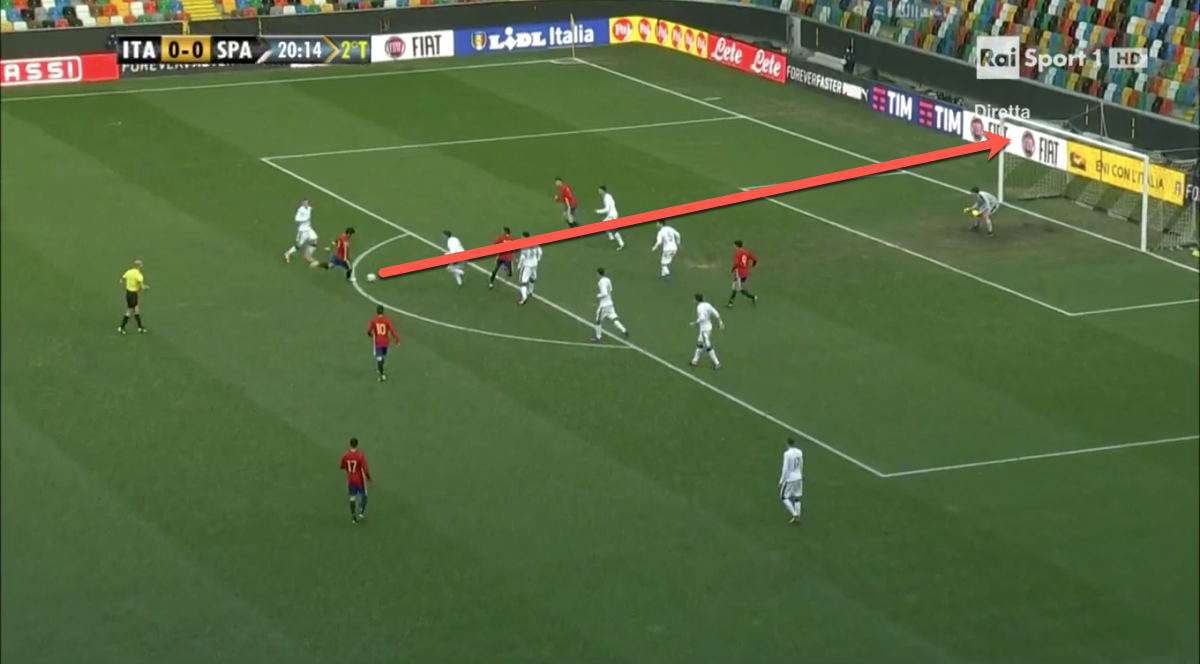 When the ball is played to him he unleashes and thunderous left-footed strike into the top corner. In a similar fashion, Aleñá bagged a goal from distance on his senior debut against Hércules in the Copa del Rey earlier this season.

His near-perfect technique also lends itself to set-pieces, with the Barça man often tasked with taking corners and free-kicks for the B team, whipping in dangerous deliveries and contributing to his impressive tally of seven assists in the Segunda División this term.

Having been selected in Luis Enrique’s matchday squad a handful of times in 2016-17, and being given his senior debut in the cup, Aleñá’s first-team involvement will only increase in the coming months.

Barça will fight tooth and nail to hang onto their most gifted young prospect, who they hope will be ready to light up the Camp Nou on a regular basis in the near future. Remember the name Carles Aleñá.

Barcelona's 3-4-3 Has Been A Success But Needs Work