Philippe Coutinho's £140million move from Liverpool to Barcelona in January brought about the possibility of a mouthwatering prospect at the Camp Nou.

After losing Neymar to Paris Saint-Germain in a world-record £198million deal last summer, Barça's vaunted ‘MSN' trio of Lionel Messi, Luis Suárez and the Brazilian forward, who had combined for a staggering 364 goals in the the previous three seasons, was broken up.

While Barcelona moved to replace Neymar with impressive Borussia Dortmund winger Ousmane Dembélé, filling such sizeable boots was a tall order for the 20-year-old Frenchman, who'd inevitably need time to develop and adapt to his new surroundings.

Dembélé's recovery from injury and Coutinho's bedding-in process meant Barça fans were made to wait a little longer than expected to see all four attackers in the same starting line-up. But the visit of Girona on Saturday night saw the quartet unleashed for the first time, and it was magnificent.

Despite falling behind to a shock third-minute Cristian Portu strike, which struck both posts before nestling into Marc-André ter Stegen's net, Barcelona cruised to an emphatic 6-1 victory.

Suárez bagged a hat-trick to take his tally for the season to 23, Messi was twice on the scoresheet and Coutinho opened his La Liga account with a stunning 25-yard strike.

Dembélé was the only front-four member unable to find the net, but the former Rennes youngster provided an assist and produced one of his most encouraging displays of the season to date, with four key passes and four successful dribbles.

Perhaps more impressive than the four stars accounting for all six goals on the night was the fact they cleaned up when it came to assists, too: Dembélé, Messi and Coutinho laid on Suárez's hat-trick; Suárez and Coutinho set up Messi's double; and the Uruguayan striker played the final pass before Coutinho's wonder-strike.

Aside from their goals and assists, the Barça front four totted up 12 key passes, 11 dribbles and 12 shots on target. Their interplay resembled the kind of slick understanding which ordinarily takes months to create, yet this was their first outing together.

This all points to an exciting upcoming era at the Camp Nou. Barça, unbeaten in La Liga, already enjoy a commanding lead at the top of the table and remain on course for a league, cup and Champions League treble.

But fitting all four attackers into one starting XI requires Valverde to tinker with his system and forgo a degree of defensive solidity, meaning the former Athletic Bilbao coach might need to select just two or three of his superstars when faced with a higher calibre of opponent.

For most of this season, Barcelona have utilised a 4-4-2 shape, moving away from their customary 4-3-3 and taking a slightly more conservative approach, fielding two central midfielders to shield the backline – usually Sergio Busquets and Ivan Rakitić – with Messi and Suárez shouldering much of the creative burden as a front two. 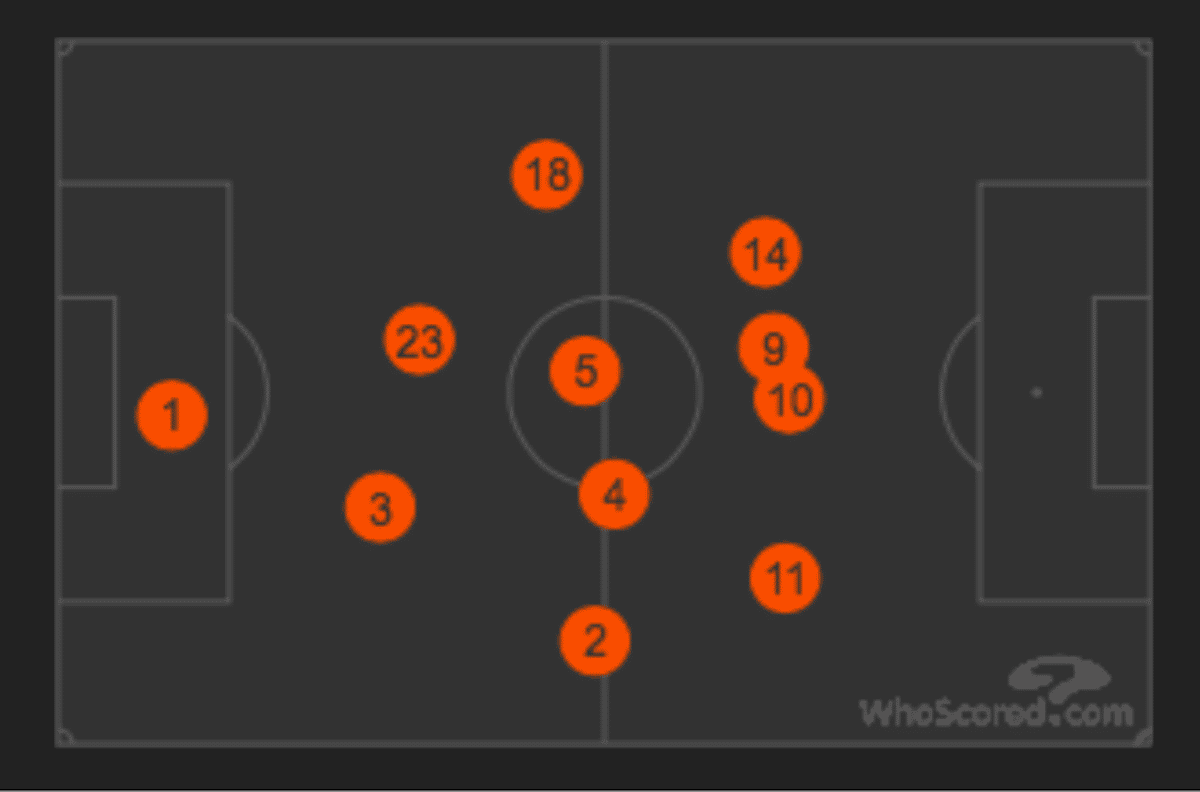 Against Girona, however, as the above average-position map, courtesy of , shows, the La Liga leaders were lined up in an expansive, attack-minded 4-2-4 system to accommodate all four star forwards; with full-backs Nélson Semedo and Jordi Alba pushing high, their shape often more resembled 2-4-4 in possession.

Such an approach against, say, a Real Madrid or an Atlético Madrid would prove incredibly risky; in such fixtures a reversion to 4-4-2 or 4-3-3 may be required. The same will be true in Champions League ties, although Coutinho being cup-tied in Europe's premier club competition this season means Valverde doesn't have to contend with any such selection dilemma just yet.

However, against La Liga opposition outside the top four or five places, particularly in home matches, Barcelona's fabulous four could see them blowing away sides in an even more dominant fashion than the MSN used to.

They may not have a catchy acronym, and they are yet to prove they can be effective together against top-level opposition, but the combination of Messi, Suárez, Coutinho and Dembélé, just as Barcelona hoped it would, has the potential to dazzle and destroy.