Barcelona know they are guaranteed to progress from group C but defeat here could see Boca Juniors nick top spot on goal difference. That means they still have a job to do against a Santos side that still have their own future to play for; a win could see them finish in the top two. Which side will take the points on offer? Find out with our Barcelona vs Santos match preview with free tips, predictions and odds mentioned along the way.

Both Barcelona and Santos arrive in this game with their own goals to complete. Unfortunately, that spells bad news for Santos because it means their hosts won't be taking their eye off the ball. The pair are both in similar form over the last five games having won three each but Barcelona have head to head results and the longer term form book smiling on them. Santos' three wins in their last five are also the only wins they have in 10 having lost six games. For Barcelona, they've won seven of 10 losing just once. They've also won their last two games against Santos.

Although we've made the prediction that Barcelona will win, we do think the match will be a fairly even one. Across the last five head to head meetings there have been two Barcelona wins, two Santos wins and a draw with each side scoring a combined five goals in those matches. As for most recent form, three of Barcelona's last four wins have been by a margin of just one goal whilst the two defeats Santos have tasted in their last five games have been by the same single goal margin.

One of the most impressive things about Barcelona's form of late is their strong defensive displays. They've kept seven clean sheets in their last 10 games – including against Santos last time they played. Throw into that the fact they've also blanked themselves in one match and they've only been involved in two from 10 where both sides have scored. Santos' last 10 isn't too dissimilar; they've won three games to nil but have lost four whilst failing to score. That means 70% of their last 10 have ended with at least one team blanking.

Barcelona to top group as Santos rely on results elsewhere

Barcelona have been one of the most impressive sides in the Copa Libertadores so far this season and another win here will mean they top the group with four wins from six – although a point would bank them top spot too. Where Santos are concerned, they will be relying on results elsewhere regardless of how they get on. If they win, they'll need Boca Juniors to slip up to give them second place. If they lose or draw, they'll also be looking at Boca Juniors vs Strongest to see where they end up. The likely scenario? Third and a drop to the Sudamericana. 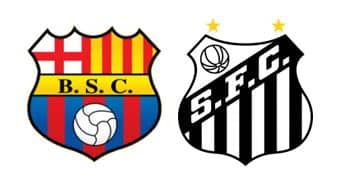