With a win in this afternoon’s Clásico at the Camp Nou, Real Madrid would open up a nine-point gap over Barcelona, as the European champions look to take a major step towards claiming their first La Liga title since 2012.

Los Blancos currently sit top of the table on 33 points after 13 games, six points clear of Barça in second. Madrid haven’t enjoyed such a lead over their biggest rivals since a 2-1 win away over the Catalan giants took them seven points clear in April 2012; under the guidance of Jose Mourinho, they went on to win the title that season.

Barcelona will be buoyed by the return of captain Andrés Iniesta. The World Cup winning midfielder has been out of action since picking up a knee ligament injury 14 minutes into his side’s dramatic 3-2 victory over Valencia at the Mestalla on October 22.

The 32-year-old has been sorely missed. With midfield pivot Sergio Busquets struggling for form, and with summer signings André Gomes and Denis Suárez yet to truly settle into life at the Camp Nou, Barcelona’s midfield has been bereft of its customary control and creativity.

In a 1-1 draw with Real Sociedad last weekend, the Blaugrana were fortunate to escape without suffering a third defeat of the season, as their midfield trio of Rafinha, Busquets and Suárez failed to get a foothold in the game; Iniesta’s return should help restore Barça’s usual authority in the middle of the park. Ideally, manager Luis Enrique would’ve liked to give the number 8 some game time in the midweek Copa del Rey tie against Herculés, but suspension meant Iniesta could play no part in the 1-1 draw. 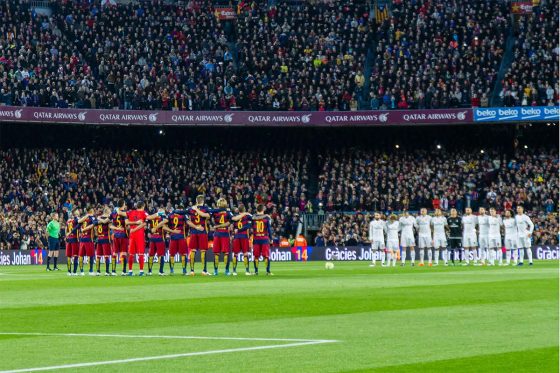 Madrid come into this fixture riding a 32-game unbeaten streak. But despite their extraordinary run of results, Los Merengues haven’t looked wholly impressive of late. A Cristiano Ronaldo brace saw them edge out Sporting Gijón 2-1 at the Bernabéu last weekend, but had Duje Cop not skied a second half penalty, the home side could well have dropped points.

Heading into the last meeting between the two clubs at the Camp Nou in April, Barça were the form side, unbeaten in 39 games and 10 points clear of their opponents. A 2-1 win for Madrid, thanks to an 85th minute Ronaldo, goal ended the home side's unbeaten streak and set in motion a chain of results which saw the Blaugrana’s comfortable lead at the top of La Liga almost completely extinguished, to the point where they had to win on the final day of the season to secure the title. Barça will be hoping to enact revenge this afternoon.

The away side will travel to Catalonia without Welsh speedster Gareth Bale, who has been ruled out for up to four months after undergoing surgery on damaged ankle ligaments this week. Spanish winger Lucas Vázquez is likely to replace the former Tottenham Hotspur man.

Despite having guided his team to Champions League glory in his first season as a top-level coach, Zinedine Zidane has his doubters. Many feel that the Frenchman is limited tactically and has benefitted from incredible luck so far. This Clásico will provide the Real Madrid boss with another high-profile opportunity to prove his doubters wrong.

The most successful Madrid boss of the last two decades, Vicente del Bosque, won two Champions Leagues and two league titles between 1999 and 2003. The Spaniard employed a simple tactical approach while being a master man manager. In similar fashion, Zidane’s ability to juggle the myriad Galáctico egos within the Bernabéu dressing room is proving that the most important work of a successful Real Madrid coach is done away from the tactics board.

In the opposite dugout, Luis Enrique will be hoping to avoid the unwanted distinction of becoming the first Barcelona coach to lose back-to-back home Clasicos.

Though more experienced than his opposite number, Luis Enrique is facing similar criticism to that levelled at Zidane. The 46-year-old former Roma boss won a Treble in his first season in charge at the Camp Nou and claimed a league and cup double last term. But many culés have grown frustrated with Luis Enrique’s tendency to tinker with a winning team, while his in-game tactical problem-solving has occasionally let him down. As with Zidane, a victory in today’s clash could prove the perfect remedy to silence the critics.

As ever, Lionel Messi and Cristiano Ronaldo will take centre stage when the two sides face off, and they are both in peak form. The superstar duo are the betting favourites to win yet another Ballon d’Or this year, and a stellar performance in the Clásico could help sway the last few undecided voters to put a cross next to their name on the ballot paper.

With Barça’s inconsistency this term, Messi has once again been the man to bail his team out of trouble. He scored the equaliser against Real Sociedad last weekend, and he produced one of the most spell-binding 45 minutes of his career to inspire a 2-1 win at Sevilla last month. 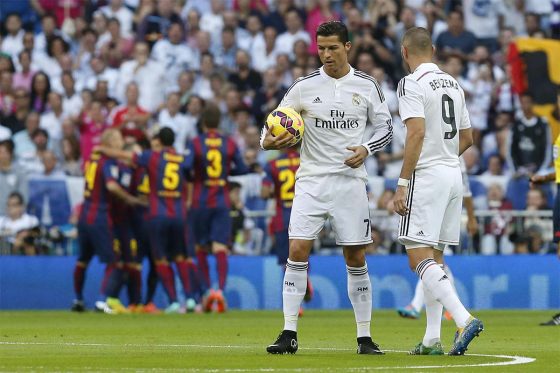 After a slow start to the season, Ronaldo sits in a familiar positon at the top of La Liga’s goal-scorer’s chart with 10 goals, one more than Messi. Amid suggestions that, at 31, his powers are beginning to wane, the former Manchester United forward produced a hat-trick against Atlético Madrid two weeks ago, and bagged a brace in his last outing.

With the game kicking off at 15:15 GMT, broadcasting laws preventing football matches being shown between 14:45 and 17:15 mean that viewers in the UK will not (legally) be able to watch the biggest fixture in world football live.

But whether watching the action as it unfolds or later on in a delayed broadcast – or whether you’re one of the fortunate 98,000 inside the Camp Nou – a fascinating spectacle is almost guaranteed; meetings between Barcelona and Real Madrid rarely disappoint.

No contest carries more hype than a Clasico, but, with no goalless draws between the two sides in well over a decade, the hype is justified.