Having assumed the captain's armband following Andrés Iniesta's departure for Japan last summer, Lionel Messi was determined to deliver a sixth Champions League title for Barcelona this season. And it showed.

He is the competition's top scorer this term, with 12 goals from nine starts. Against Lyon in the last 16, he manifested a 5-1 second-leg victory, scoring twice and assisting another two. Manchester United were next, and again Messi starred, creating the game's only goal at Old Trafford before claiming another brace to secure progress in the return leg.

Usually resistant to rest, he allowed himself to be left out of league games in the build-up to both legs of the semi-final against Liverpool. In the first meeting, at the Camp Nou, the dividends of his rest were reaped: another double, this time in a 3-0 victory.

But, finally, in the return fixture at Anfield, this man on a mission needed help. He could no longer do it alone, much though he tried. Messi twice forced Alisson into fine saves in the Liverpool goal, and laid on three gilt-edged chances for colleagues, none of which were taken.

Barcelona have already wrapped up another La Liga title, and they will likely make it a second straight domestic double, with a Copa de Rey final against Valencia still to come. And Messi has enjoyed one of the best individual seasons of his career, having scored 48 goals in a campaign which has seen his playmaking skills more prominent than ever. 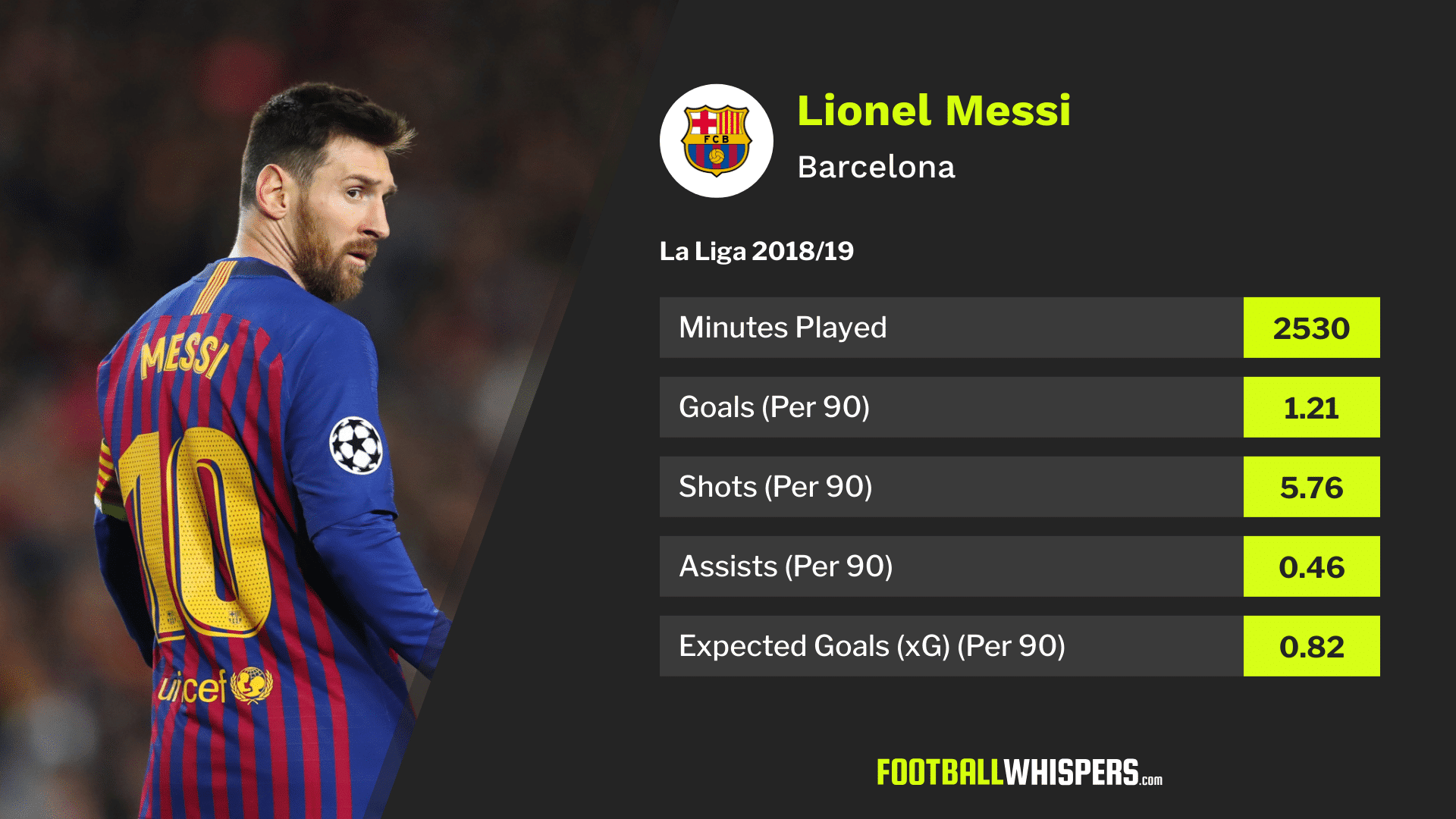 But he will turn 32 this summer. Messi's desire for another Champions League winners' medal must have, in some part, been driven by a sudden cognisance of his mortality. Of the fact that, although he is still the world's best player, retirement is creeping in from the horizon.

An unstated desire to be remembered as the greatest of all time drives Messi; maybe not as overtly so as it does Cristiano Ronaldo, his great rival, but Messi's sense of legacy is no less present for being unspoken. And as a club, Barcelona could, and should, have done more to aid their star player's quest; their ambitions are shared; success for Messi is success for Barça.

Ronaldo left Madrid last summer aged 33, having been key to three Champions League triumphs in a row, and four in the space of five years. He was not, though, relied upon as the sole driving force of Madrid's European hopes.

Instead, recognising the Portuguese's inevitably declining assets, Los Blancos made him a part – a key part – of a greater whole. He was able to trim his game, focusing on his aerial ability, speed over short distances and knack for sniffing out chances.

Ronaldo continued to produce moments of inspiration – like his bicycle kick in the quarter-final win over Juventus last season – but if he had an off-night – such as last year's final – it didn't have to be catastrophic to Madrid's chances.

Messi has been afforded no such luxury. Instead of building a support structure around the 31-year-old genius, Barcelona have asked more and more of their superstar captain.

Against Liverpool, time and again Messi collected the ball in the middle third, looked up, and saw little ahead of him. No movement.

The loss of Neymar to Paris Saint-Germain and Barça's subsequent courting of shirt-shifting star names has seen Philippe Coutinho added to make an attack lacking speed. Luis Suárez, now 32, is still capable of magic, but his spells of anonymity in games grow ever longer.

It is testament to Messi's supreme precisions and forceful creativity that he managed to conjure three clear chances for others against Liverpool, when faced with so few willing runners.

And Barça's failure to replace Iniesta has left Messi shouldering a greater creative burden, while they no longer exert such control over the middle third without the great Xavi.

The signing of Frenkie de Jong, one of the stars of the vibrant young Ajax side, is certainly a step in the right direction. The 21-year-old Dutchman, whose €75million move to the Camp Nou has already been agreed, will either replace the rapidly declining Sergio Busquets or operate slight higher up and restore some of the control and inventiveness that was lost with Xavi and Iniesta's departures.

But more must still be done to lighten Messi's load and ensure Barcelona get the best from their greatest ever player in his final years.

That includes finding an understudy to Suárez, a striker with pace and the ability to change games from the bench. There is little sense in persisting with Coutinho at this point either; 18 months on from his club-record move from Liverpool, the Brazilian has struggled to fit into a system in which he can never be the free creative spirit.

Messi, Suárez, Gerard Piqué, Busquets, Jordi Alba, Arturo Vidal and Ivan Rakitić are all over 30, but, to varying degrees, Ousmane Dembélé, Carles Aleñá, Malcom and Arthur have not yet been fully trusted with prominent roles.

Manager Ernesto Valverde, despite a likely second double in two years, may yet pay for the collapse against Liverpool – which mirrored last season's quarter-final capitulation versus Roma – with his job.

If he is to remain, the former Athletic Club coach must shake off the cautionary approach which has seen him too slow to react when momentum has shifted against his side in their two Champions League humiliations, and begin to surround Messi with more pace in attack and greater composure in midfield.

This season's run to the semi-finals is the furthest Barcelona have got since they last won the competition in 2015, having exited at the quarter-finals in each of the last three seasons. For a team containing the greatest player of all time, that's not good enough; and a pill all the more bitter in light of the continental success rivals Madrid have enjoyed in that time.

Were Barcelona to have completed a treble this season, their success would have been as much a result of the outstanding brilliance of one player as Maradona's World Cup triumph with Argentina in 1986.

More often than not, Messi can do it all by himself. But it's time for Barcelona to stop needing him to.