The spotlight will turn off and the curtain will come down. Camp Nou will lose one of its greatest ever performers. Andrés Iniesta’s days as a Barcelona player are coming to an end. Just like he has been on and off the field, the exit will likely be without much commotion.

A move to China seems somewhat inevitable, as Iniesta looks at life away from Barça. Something that at one point seemed unthinkable. The chance of one final pay day, promotional support for his wine brand and the general experience of a new culture for quiet boy from Albacete.

Soon only Sergio Busquets will remain of a midfield that left every team that got in its way in a spin. Xavi is gone, trying to profess his footballing values in Qatar. Now Iniesta will go too, by way of East Asia.

“They get you on that carousel and they make you dizzy with their passing,” said Sir Alex Ferguson, reflecting on seeing his Manchester United team devoured before one of the finest midfields football has seen at any level.

Iniesta was a key part of it, and has since shine in other systems at Barça. While not as dominant or spectacular, his role has never diminished. It might’ve changed but it was never reduced. When everyone said he needed a rest, Iniesta would come out and school everyone one more time.

His movement, his grace never wavered. Maybe he wasn’t as quick in body, but his mind was already on the next page as others were struggling with the opening paragraph on the previous one. 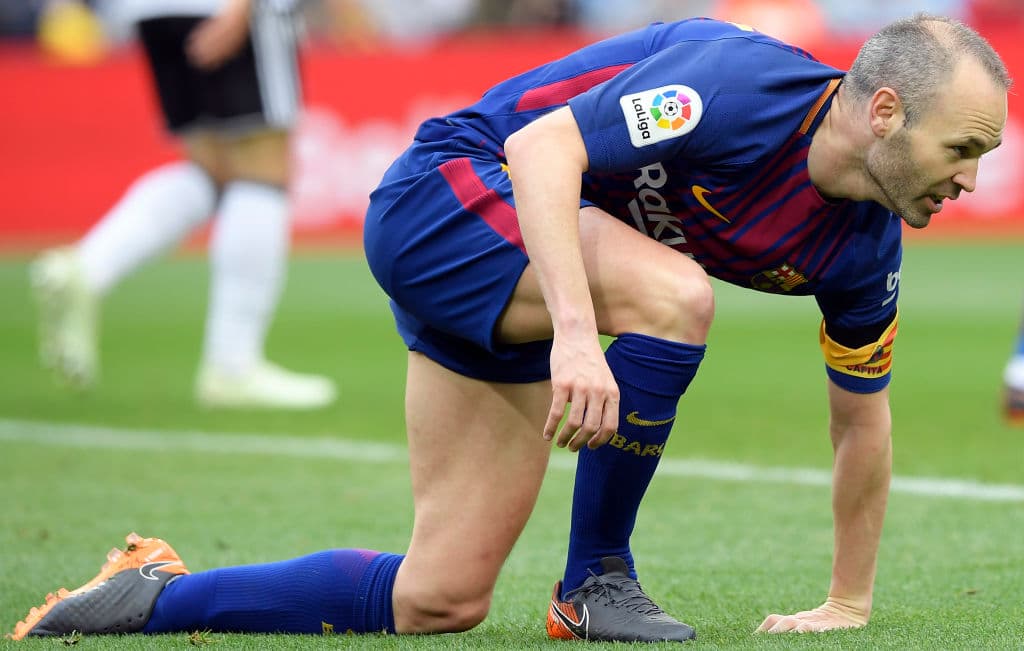 He started this season with 33 titles to his name, only Ryan Giggs and Dani Alves have more. By the time he departs for China, he could be level with the Welshman. In terms of success, history and prestige he’s up there with the very best. Even though we are blinded by trophies, Iniesta’s input has been so much more significant.

Along with Xavi, he professed a brand and a style of play that defined a certain era of football. Without all the components, of which Iniesta was a key one, it wouldn’t have been possible to have the success Barça and Spain’s encountered.

Iniesta’s goal in the 2010 World Cup final perhaps defines him best, and it was fitting he underlined the dominance Spain were having. In every single stadium around Spain to this day, the 33-year-old is handed an ovation for what he did in South Africa that summer. He may leave for China, but he will return one day, and everyone will rise to their feet again.

None more so than at Camp Nou, where they are spoiled when it comes to sheer quality. Iniesta’s final season at the club has been an interesting one, something akin to a balancing act. He’s had to be man-managed more than ever before in terms of his fitness and minutes.

Ernesto Valverde’s efforts to preserve him have come under great scrutiny, with some sections of support keen to see the new blood integrated and progress this Barça team. Iniesta will finish the season with under 2000 minutes in La Liga, however, yet his influence feels as important as ever in these transitional days for Barça.

Even the player that leaves people speechless the most, Lionel Messi, is at times in awe of Iniesta.

“Andrés and I are similar in that we both use our bodies a lot, to avoid opponents. But he has something that always amazes me. There’s always a moment when you think you’re going to catch him, when you think you’re going to get the ball off him, but you can’t. He’s not especially quick, but he has that ability to always get away from you, which comes from his technique.”

While in terms of assists and goals he’s not producing, Iniesta’s contribution lies elsewhere as he knits the team together and punctures defences with his movement.

He has played 1107 accurate passes this season, coming in at a rate of 63.13 per 90 minutes. In terms of key passes, it’s 0.85 per 90, with the player playing further down the field offering support to Busquets in terms of building play.

When he does drive at teams, he does so with familiar aplomb. Iniesta has 3.09 successful take-ons per 90 this season, underlining that he still has that ability to zip past players in the blink of an eye. Rather than pace, it’s more of a reliance upon touch and technique.

The pressure will be on Philippe Coutinho and Ousmane Dembélé to step up in these areas and account for the loss of Iniesta. At least Barça are blessed with plenty of talent to step into the role, and while they may fall short in terms of bringing all that Iniesta does to the table, it’s a not a parallel case to that of when Xavi left the club.

Then, with Thiago Alcântara gone, Barça lacked a figure to step into the role and pick up the baton. Coutinho’s already shown glimpses of his talent in Catalonia, and if anything he could offer the sheer end product Iniesta hasn’t in the last few seasons.

He has been primed somewhat for the role and the Brazilian is certainly more prolific in the final third in terms of finishing and assisting, so the pressure will be on him next season when Barça face life without Iniesta.

Life at Barça will go on without Iniesta, but it certainly won’t be the same.