Over the years, Barcelona have prided themselves on their ability to nurture graduates from their La Masia academy into stars of the Camp Nou.

However, budding technicians from within the Catalan side's ranks are finding it increasingly difficult to break into the senior side on a regular basis and rumours of a potential move away from the club for Rafinha Alcântara suggest that trend is not going to be bucked any time soon.

The 24-year-old midfielder has played 78 times for Barça since his senior debut in November 2011 but has struggled to nail down a regular starting berth. Catalan newspaper Sport claim Arsenal have identified the versatile star to bolster their options, with Alexis Sánchez set to join Manchester United and Theo Walcott having moved to Everton.

ESPN Brasil said last season Rafinha, who made his first appearance of the season this week in Barça's 1-0 Copa del Rey defeat to neighbours Espanyol, was considering a move to Arsenal, while Cope reported that the Brazilian was considering leaving the Camp Nou at the end of the campaign in order to boost his international hopes ahead of the 2018 World Cup. It is thought that Barcelona will look to recoup a fee in the region of €30-40million for the player, with an initial loan for the rest of the season also an option.

Rafinha's father and agent, Mazinho, a World Cup winner with Brazil in 1994, refuted claims his son is preparing to leave the reigning Spanish champions, though.

“This is absurd, I don't know who started this,” Mazinho told Mundo Deportivo back in May.

“Rafinha has no interest in leaving Barcelona. We have a contract until 2020 and he will finish it normally.”

Whether Rafinha is actively looking to leave the Blaugrana or not, Barça must ensure that they hold onto the gifted and versatile midfielder, who is believed to have a €75million release clause in his contract. 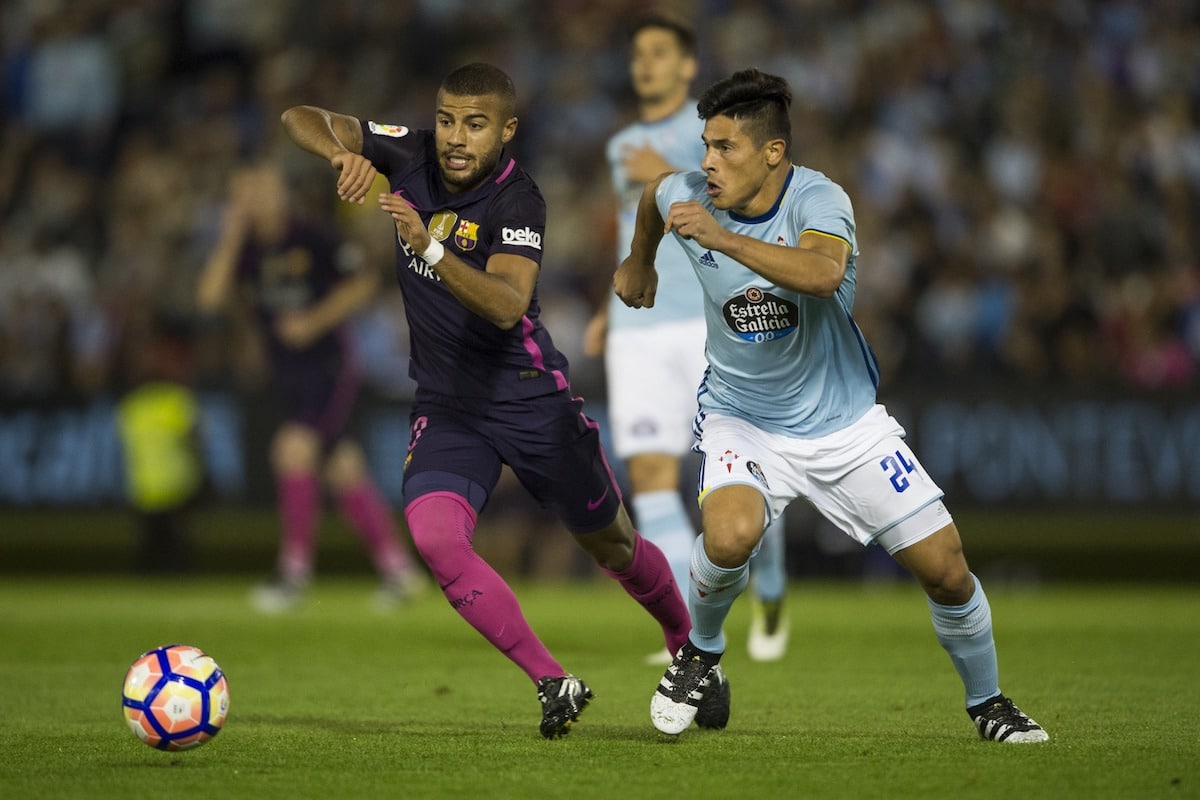 Rafinha made an excellent start to the 2016/17 campaign, netting five goals and one assist in his first eight appearances.

But beyond his scoring output, the Barça No.12 was able to adapt to several different roles, slotting in at wing-back when manager Luis Enrique trialled a 3-4-3 formation as well as in more familiar central-midfield and right-wing roles in a 4-3-3.

A less regular inclusion towards then end of the season, it seemed as though Rafinha had slipped down the pecking order, with the likes of André Gomes and Denis Suárez preferred.

However, the two signings from the summer 2016 have hardly set the world alight with their performances. Gomes, a €55million acquisition from Valencia, still looks a timid presence in midfield, seemingly unwilling to take any kind of risk and not yet grasping what is required of a Barça player.

Suárez, though a gifted dribbler and accurate passer, was signed to add depth to the squad rather than to feature regularly in the Blaugrana's strongest XI.

Rafinha, on the other hand, has only ever known Barça, their style, the dynamics of the club and all that comes with it. If you throw him into the team, in almost any position, he seldom disappoints.

Moving to a club of Barcelona's stature can take a significant period of adjustment for many players. So to suggest that, if sold, Rafinha could be easily replaced, is wide of the mark.

To acquire a player of Rafinha's already vast experience – a Champions League winner, full international and Olympic gold medalist – would come at a serious premium. While his technical quality, versatility and temperament is a rare cocktail.

Rafinha is unlikely to ever be a star on the level of Lionel Messi or Luis Suárez. But the Spanish champions may come to regret so readily parting ways with a player of his calibre.

Take Rafinha's brother Thiago Alcântara for example. When he was breaking into the senior side as a young player he was earmarked to replace the great Xavi at some point.

But Barça grew impatient and less willing to invest in the slowburn of developing a teenager into a refined playmaker.

Thiago was sold to Bayern Munich in 2013 for just €20million – fast forward four years and he is now regarded as one of the best midfielders in the world, his value quadrupled.

What Barça would give to have Thiago back in their squad. Maybe, had they given him the right time and space to develop, the Spain star would have saved the Catalan giants the €55million they splashed on Gomes.

From both a footballing and a wider philosophical perspective, Barcelona must make sure Rafinha stays at the Camp Nou for the foreseeable future.