It took far longer than expected but Barcelona have, finally, tied down Jordi Alba to a new long-term contract. The 29-year-old has signed a five-year deal with the La Liga leaders, which could take him through to retirement.

The Spaniard is, arguably, the world's best left-back and has enjoyed a stellar campaign – he has already claimed 14 assists in all competitions, many of which have been for Leo Messi, a close ally on and off the pitch.

What is perhaps most impressive, though, is Alba's relentlessness. Barça do not have a senior deputy for the Spain international. So he is expected to play week in, week out, and police the entire left flank, something he has largely managed that this term.

However, as he moves into his thirties, Alba will need an able deputy to ease the burden. Barcelona recognise this and, according to several reports in Spain, they have drawn up a three-man shortlist: Nacho Monreal, Filipe Luís and Alberto Moreno.

The latter two players are out of contract in the summer while Monreal could be coaxed away from North London for a modest fee. But who should Barça make their No.1 priority?

We have looked through the numbers and weighed up the pros and cons to identify who the La Liga leaders should target this summer.

It was believed the Arsenal defender could leave the Emirates for nothing this summer. But, according to ESPN, the Gunners have triggered a clause in his contract which keeps the Spaniard at the club until the summer of 2020. That may prove a stumbling block for Barcelona.

Monreal remains a consistent performer for the Premier League side. He has made 21 appearances for Unai Emery's side this term – either side of a hamstring injury sustained in September – and has also filled in at centre-back due to Arsenal's injury woes in defence.

And despite his advancing years, he remains a threat in the final third; only eight defenders can better his 0.23 assists per 90 in England's top flight this season.

He would undoubtedly prove a useful addition at the Camp Nou. However, Arsenal, given their reduced financial power in the transfer market, are unlikely to allow Monreal to depart for nothing, especially without a back-up of their own in place. And Barça will not want to pay a fee for a player who will turn 34 years old next season.

So unless a compromise can be reached – perhaps involving Denis Suárez, who is currently on loan at Arsenal from Barcelona – the La Liga leaders would be wise to pursue one of the other targets on their three-man shortlist.

The defender's contract with Atlético Madrid expires in the summer but the 33-year-old has not hidden his desire to remain with the club.

“I hope Atleti will offer me a contract of two or three years so that I can finish my career here,” he told Brazilian outlet Globosporte in January. “But we know that in football things can change.

“Atleti have a ‘rule' of only offering players over 30 years old one-year extensions. If I renew year-by-year, I don't know if in a short time I will have to take my children out of school, go to a place I do not want or even leave football.”

What is clear from those comments is that Luís, more than anything else, wants stability. Barcelona could offer him that. A two-year deal would allow the Brazil international to continue in Spain while also not impinging the development of 19-year-old Juan Miranda. 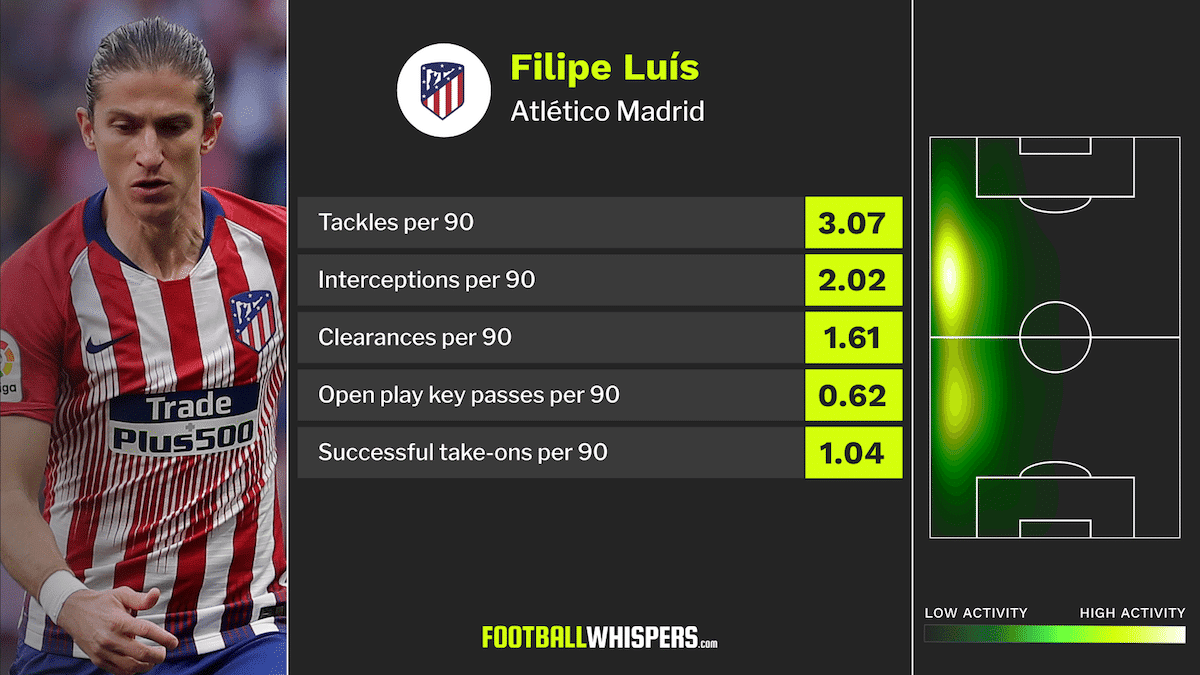 This season Luís has averaged 3.07 tackles per 90, the fifth-best figure among La Liga defenders, and is also inside the top twenty for interceptions per 90. He is an excellent one-vs-one defender but can be a threat in advanced areas, too – his 1.04 successful take-ons per 90, in a defensively-minded side like Atleti, is testament to that.

Luís would be an excellent understudy for Alba, yet also a potential mentor for Miranda. And he wouldn't cost a fee… unless Atleti have a dramatic change of heart in the coming weeks and give him what he wants.

It was in December that Moreno, effectively, admitted he was ready to leave Liverpool after almost five years with the Reds.

“Moving back to Spain is something I have thought about,” he said in an interview with Cadena Sar, “I am tired of the cold here but I do not know about interests from other clubs.”

His departure from Anfield has, in truth, been a long time coming. The Spaniard has never truly won over Jürgen Klopp.

The Liverpool boss made James Milner his first-choice left-back during the 2015/16 season and then signed Andrew Robertson, who after a brief period of adaptation, developed into one of Europe's most fearsome full-backs.

That has left Moreno on the sidelines. This season he has only made five appearances in all competitions, the last of which came in the FA Cup third round defeat to Wolverhampton Wanderers at the start of January.

However, Barcelona should certainly not be put off. At 26 years old, Moreno is far younger than both Monreal and Luís – he is also three years Alba's junior. So his signing would be a long-term investment rather than a short-term fix.

He is also far more of a like-for-like replacement for Alba. Moreno has always done his best work in the attacking third; his pace can stretch defences, he has the guile to beat opponents and the composure to pick out the right pass.

Last season, in his 16 Premier League appearances, he averaged 0.99 open play key passes per 90, a figure only bettered by four other defenders. He also won 2.03 tackles per 90, the third highest tally and a sign that in a high-pressing system he can be very effective.

Of course, there are question marks against his defensive reliability. Moreno can switch off at vital moments and his positioning remains erratic. But against ‘weaker' sides, the opponents Barcelona would be expected to ease past, he could be an effective weapon.

If Barça are set on grooming Miranda to become Alba's eventual heir, and several reports suggest that is the case, then the choice is obvious: they should pursue Luís.

The Brazilian is an excellent defender and has, bar one season at Chelsea, spent more than a decade in La Liga. There would be no surprises. No need to adapt.

He, of course, wouldn't have the same dynamism as Alba, but he has proven himself more than effective in the final third over the years. And, of course, there would be no fee, just the lure of a contract that runs beyond 12 months.