Few players at the elite level have the ability to frustrate as much as Ousmane Dembélé. The supremely gifted and versatile French winger, despite costing Barcelona £96million a little over a year ago, is still a long way from the finished article.

He loses possession too easily (more often than 98 per cent of La Liga attackers), lacks positional understanding and is not yet as physically robust as his manager Ernesto Valverde might hope.

But he is also one of the most talented and creative footballers on the planet, and that's why Barcelona must persevere with the 21-year-old enigma.

With Lionel Messi ruled out of October's Clásico against Real Madrid with a broken arm, that stage appeared to be set for Dembélé to pick up the mantle of being Barça's primary creative attacker.

But, instead, Valverde opted to deploy Rafinha on the right of the Catalan giants' front three, while Dembélé remained on the bench until the 74th minute.

A Luis Suárez hat-trick helped the home side record an emphatic 5-1 victory over their bitter rivals. But the score was only 2-1 when the Frenchman was introduced, with Rafinha having been replaced by right-back Nélson Semedo five minutes earlier after an ineffective display. 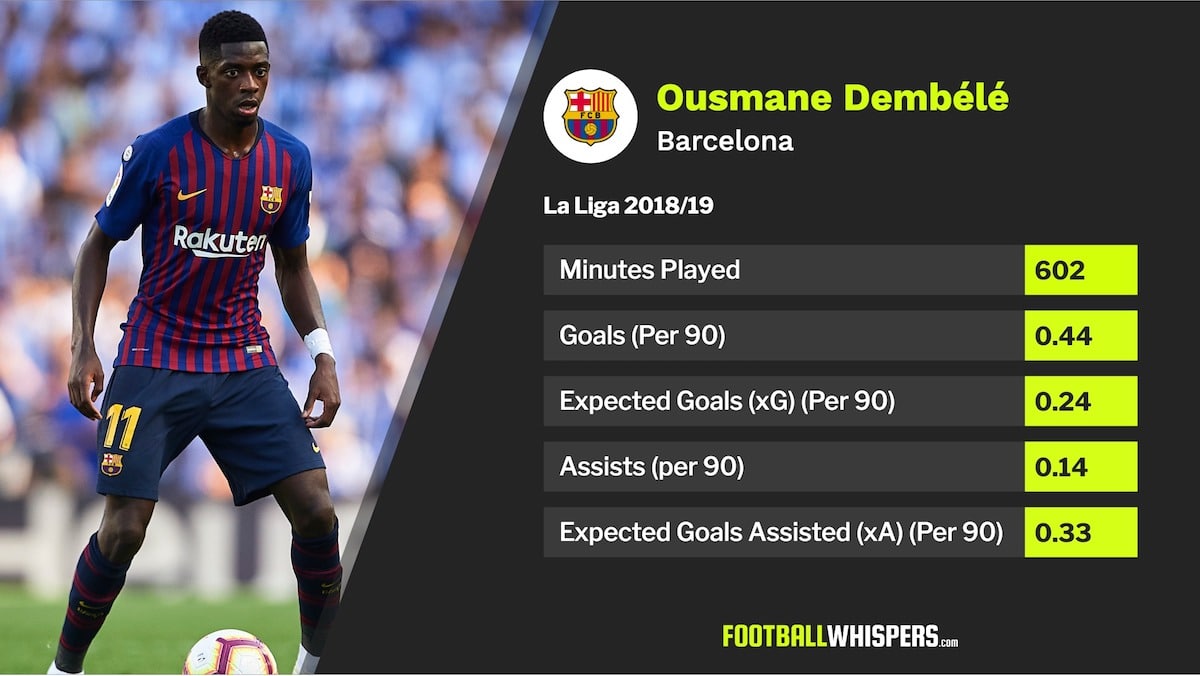 With three minutes to go, Dembélé showed what he is capable of. Collecting the ball in the inside-left position, he breezed beyond his marker and crossed for Arturo Vidal to head Barça's fifth.

Recent reports suggest Barcelona as so frustrated with the youngster signed from Borussia Dortmund last summer that they may look to sell him as soon as January, with Liverpool believed to be long-time admirers.

But Dembélé's Clásico cameo and early season form – which saw him net five times in his opening eight all-competitions games of 2018/19, including a stunning individual goal in the Champions League against PSV – show why the Barça No.11 has to be given every chance to thrive at the Camp Nou.

His first season at the club was interrupted by a serious hamstring injury, suffered in his first start and keeping him out for four months. He does, of course, have to shoulder some of the blame for the way he at times appears out of sync with his colleagues and for his lack of defensive work. But, given how hard Barcelona pushed to sign him from Dortmund, they ought to show faith and patience in the talented World Cup winner.

Dembélé is being unfairly cast as a liability, given how often he loses the ball in a side which traditionally prizes retention of possession. However, he is incredibly productive.

The goals have dried up of late, but he remains Barça's second-most prolific creator of chances, with his average expected goals assisted per 90 minutes of 0.33 trailing only Messi.

Barcelona have a long and proud history of maverick creators. Although Dembélé is not yet worthy of being listed among such greats as Johan Cruyff, Michael Laudrup and Ronaldinho, he has the ability to become a real asset at the Camp Nou.