With Ernesto Valverde now officially Barcelona manager, it is no surprise to see him linked with players he has previously worked with.

And according to Catalan daily Sport, the former Athletic Club manager has made Ander Herrera a Barcelona transfer target for the summer.

The two worked together for a season in Bilbao after Valverde returned to the Basque Country following a spell with Valencia.

And Herrera was impressive during that 2013/14 season, but has arguably become a better player during his time at Manchester United, especially under the tutelage of José Mourinho, who seems to really trust him.

Why would Barcelona want him?

Simply put, most top teams in Europe would want Herrera.

And Barcelona have had issues in midfield this season, with André Gomes failing to properly impose himself on the first team in the way you would have hoped since his arrival from Valencia.

This season he has tended to play in a role protecting the back four, a role which could free up the rest of the Barcelona midfield to move forward – not that they need much encouragement to do that at the moment.

Herrera’s role in protecting the back four has been pivotal to that and he leads by example in a way that no other Manchester United team-mate can really match in that regard.

With averages of 2.7 tackles and 2.6 interceptions per game, the Spaniard leads the Red Devils in both categories, while his fresh-faced appearance disguises the fact that the Spain international has a mean streak.

A figure of 1.5 fouls per game is level with Marouane Fellaini after all, and while he is no Roy Keane, Herrera is up for the battle in the middle ground and his ferocious bite would add something that could make the Barcelona midfield feared once again.

And with Andrés Iniesta not getting any younger, there’s definitely a space up for grabs in the midfield trio, should Valverde continue with the 4-3-3 we’ve come to associate with Barça in recent years.

How does he compare to Barcelona’s midfield?

We’ve had a look at Herrera’s 2016/17 league statistics compared to the preferred Barcelona midfield trio of Iniesta, Sergio Busquets and Ivan Rakitić.

Perhaps surprisingly, out of the Catalan club trio, the Croatian is the only man to score, but with eight goals, he comfortably got more than Herrera’s one.

In terms of defensive work, the Manchester United man has been the most busy, but that isn’t really a surprise.

Per 90 minutes, he wins 2.33 tackles and 3.14 interceptions, considerably higher than the Barcelona men. 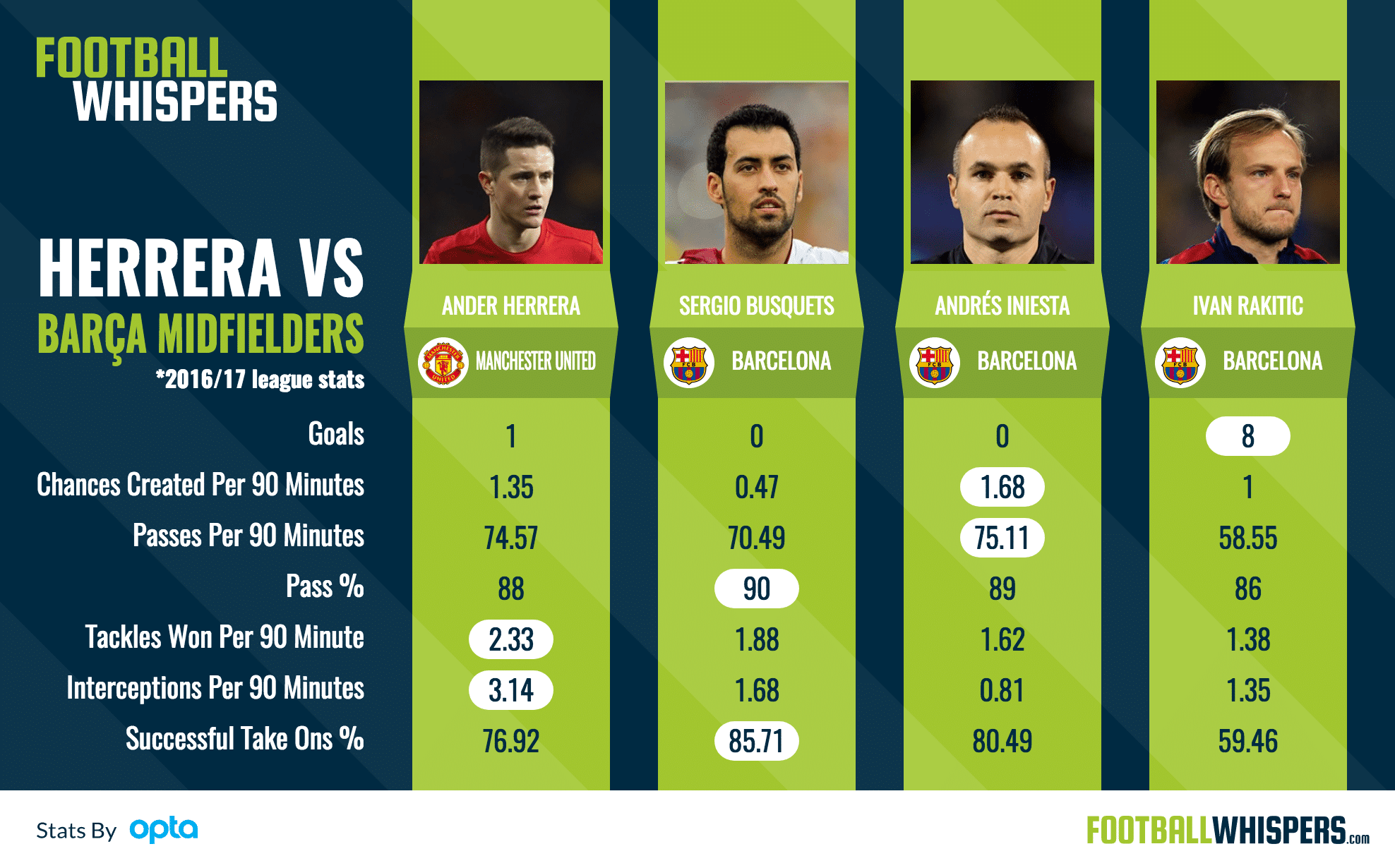 Herrera doesn’t actually fall too far behind Iniesta in terms of chances created per 90 minutes – 1.35 compared to 1.68.

Those figures are both considerably higher than Busquets’ 0.47 and Rakitić’s one.

The duo also make the most passes per 90 minutes in the league too, with Iniesta averaging 75.11 and the Manchester United man just behind him with 74.57.

And Herrera’s pass competition rate is up there with Barça’s best too – just two per cent behind Busquets’ 90 per cent.

Iniesta’s pass completion rate is at 89 per cent while Rakitić’s is 86 per cent.

Would Manchester United sell him?

The Telegraph claims the 27-year-old would be likely to turn down a move to Spain.

He is thought to, in fact, want to extend his stay at Old Trafford.

And without doubt, Manchester United will want to keep him, especially give that he was voted player of the season after an impressive campaign.

He has also been touted as a potential successor to Wayne Rooney as captain with the current skipper looking like he is on his way out this summer.

Put simply, Herrera has been brilliant this season and it was no surprise to see him win the man of the match award in last week’s 2-0 Europa League final victory over Ajax, while his excellent form also saw him earn his first cap for Spain in November.

But he only has a year left to run on his existing contract, although there is an option to extend it by another 12 months.

You will expect the two sides to reach an agreement, but if contract talks become prolonged or do not go how Herrera envisages them going, perhaps Valverde will have a chance of getting the man he wants after all.