In 1987 Barcelona were dumped out of Europe as fans called for the manager's head and heckled prolific goal machine Gary Lineker. But who was it that caused the Catalan giants to get the white hankie treatment? Well, the mighty Dundee United of course.

The 1986/87 season is one of the most memorable in the history of Dundee United. They reached a European final for the first time in their history and also made the Scottish Cup final, not to mention achieving something no other British team has been able to do since. Despite ending the campaign empty handed, they remain the only British side to have beaten Barcelona twice in a two-legged tie.

In the days before the “Old Firm” dominated the Scottish footballing landscape, the game north of the border was a very different beast from that of today. Rangers and Celtic were still huge clubs but they didn’t dominate in the way that they would in the years to come as the East coast’s “new firm” set the standard.

Aberdeen's triumph in the Cup Winners' Cup in 1983 was remarkable, not just because of the teams they knocked out along the way, but it also opened the door for clubs like Dundee United to have a go too.

United already had something of a European pedigree in the early 1980s. They reached the quarter-finals of the UEFA Cup in 1982 and 1983 and, while the Dons were beating Real Madrid in Gothenburg, United were celebrating a first-ever league championship which gave them the right to play in the European Champions Cup the following season.

A glorious run in Europe’s premier competition was only ended at the semi-final stage, with a hotly-contested penalty denying United the chance of facing the mighty Liverpool in the final.

But United would go that one step further just three years later as they once again rubbed shoulders with some of the biggest names in Europe on the road to one of the most successful cup runs in the club’s history.

The club were in a pretty stable place since winning the league in 1983 with three third-place finishes in the league, two semis and two finals in the domestic cups but with two key players leaving the club in 1986 it looked like they might struggle.

Striker Davie Dodds was first to leave for Neuchatel Xamax of Switzerland and just a few weeks later, defender Richard Gough moved to Tottenham for £700,000. 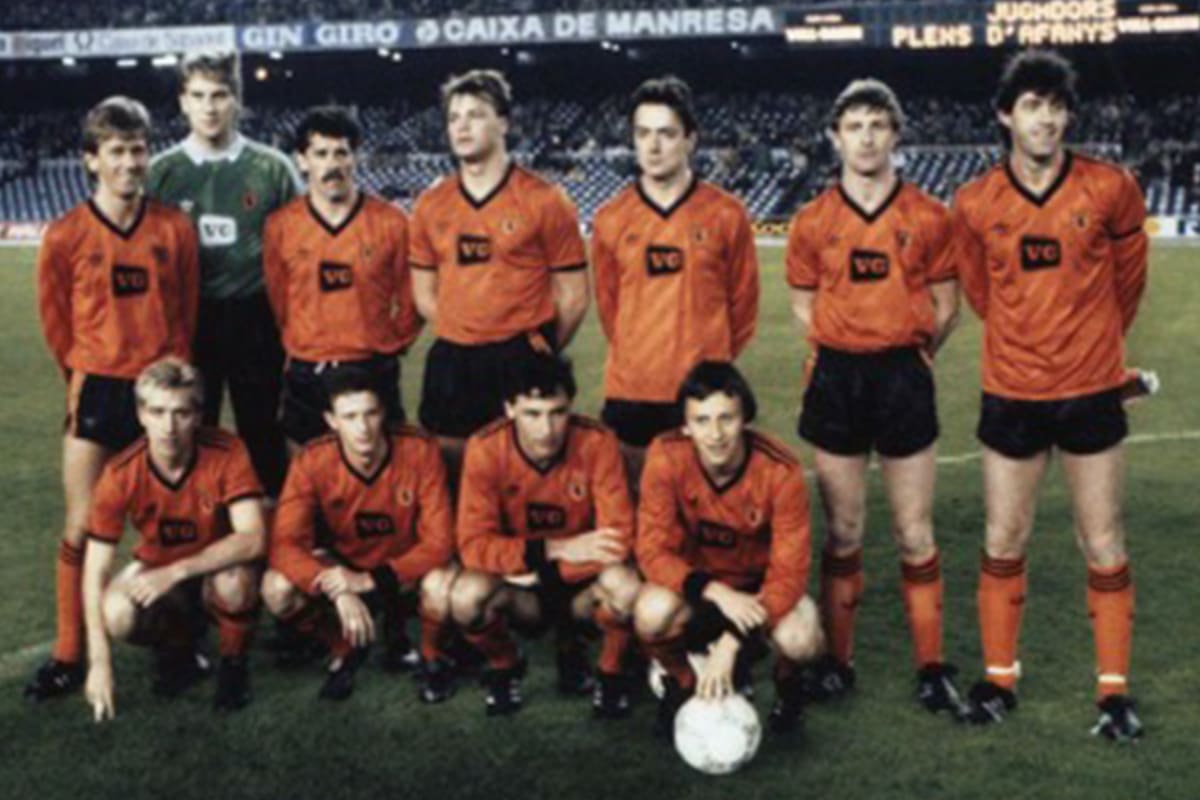 Even so, the squad still contained many of the championship winners like Maurice Malpas, David Narey, John Holt and Paul Hegarty, along with John Clark in midfield, Eamonn Bannon and Ralph Milne, with forward Paul Sturrock continuing his association with the club he had signed for as a schoolboy.

Manager Jim McLean had also strengthened the squad with the signing of goalkeeper Billy Thompson, as well as the additions  of Dave Bowman, Jim McInally and Ian Redford. There was also the 20-year-old Kevin Gallacher who worked well up front with Sturrock and Tommy Coyne, United looked strong for another season of competing for silverware. The signing of Iain Ferguson from Rangers, for just £145,000, would also be an inspired piece of business.

The club enjoyed a fantastic start to what was to be a marathon campaign and were unbeaten in their first 11 league matches, a run which would see them top the table in the autumn with Celtic and Rangers tucked in behind.

As United embarked on a three-pronged assault on silverware their European journey began in earnest against French side Lens. McLean’s side lost 1-0 away and looke like they might not make it through to the second round; but goals from Tommy Coyne and Ralphe Milne in the second-leg gave United a 2-0 win on the night.

United’s reward was a difficult looking tie against the Romanian side Universitatea Craiova, who had defeated Galatasaray in the previous round. And despite little being known of them they turned up at Tannadice and gave an impressive display – hitting the bar in the opening minutes – but Redford scored twice with Clark making the game safe by adding a third.

Their European exploits had come at a price however as the team slipped five points behind leaders Celtic into third. Jim McLean’s men were made of stern stuff though and as 1987 began United went on a run of six straight league wins, including a 3-2 win over Celtic, to put them firmly back into the race for the title.

Meanwhile, in the Scottish Cup, United had overcome Airdrie after an unwanted replay and edged past Brechin, meaning that by March they were in the last eight of two cup competitions and just two points off the top of the Scottish Premier Division. 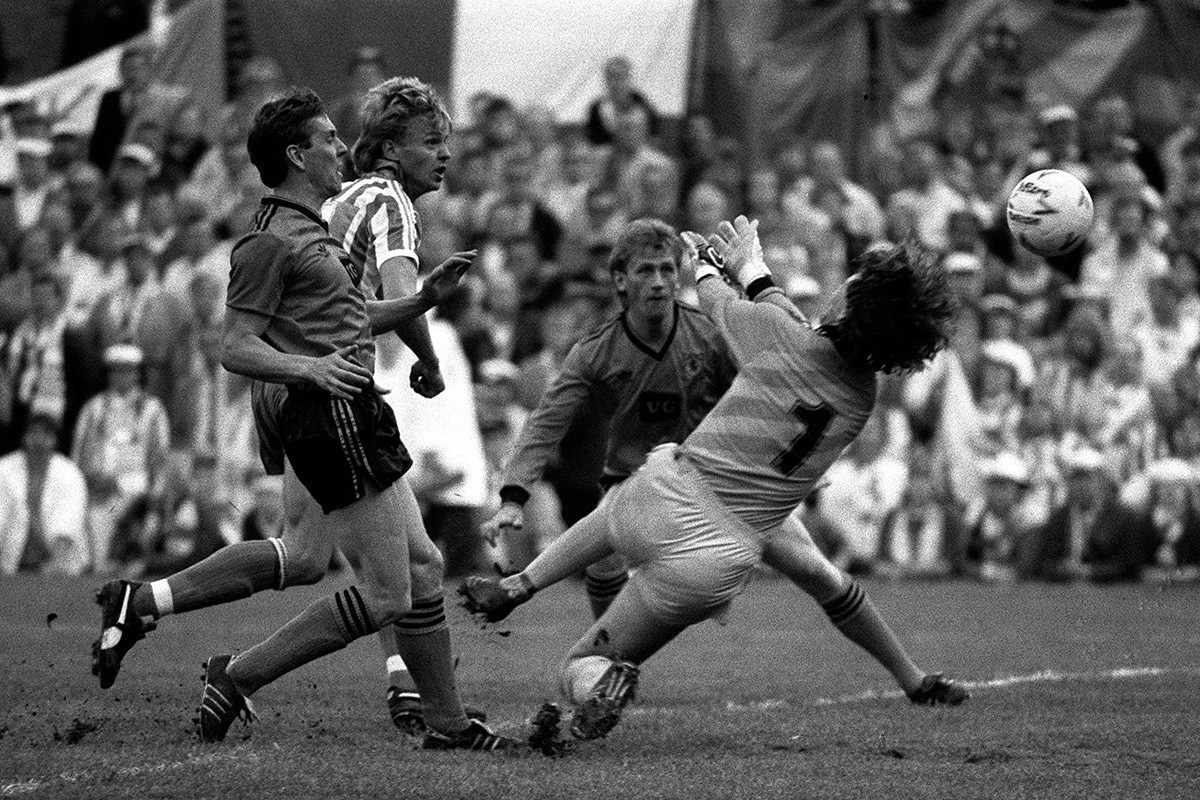 And so came the ultimate test, a glamour quarter-final tie against Terry Venables' Barcelona side that was battling fierce rivals Real Madrid for the league title back in Spain and fielded something of a star-studded international line-up that included Gary Lineker, Mark Hughes, Andoni Zubizaretta and Victor Munoz.

Tannadice welcomed the Catalan giants and their under pressure manager for the first leg and few could have wished for a better start as Gallacher’s opportunist strike after just two minutes gave United something to defend.

Far from “parking the bus” and holding on to what they had United went forward looking for more, missing great chances to increase their lead. But this gung-ho approach led to chances at the other end too, with the normally deadly Lineker missing a glorious opportunity to level things up. A 1-0 win however would mean McLean’s men travelled to the Nou Camp with something to defend.

As with any successful seasons something had to give, and for Dundee United it was their league form which would suffer as the games came thick and fast. They drew five games in seven which would ultimately kill-off any title aspirations – from March to the end of the season they would play 22 matches in 78 days.

Just four days after they had earned another hard-fought draw against Forfar in the Scottish Cup quarter-final, with Ferguson’s late penalty giving McLean’s men another chance, United arrived in Barcelona for the second leg with few believing the trip was to be more than just a day out for players and fans.

Normal service looked to have been resumed when a deflected effort from Caldere put Barcelona 1-0 up at the break, but instead of being deflated the visitors grew in belief and with just five minutes to go Sturrock won a free-kick in a dangerous area.

As the game ticked towards extra-time Clark went forward on a late sortie; beating his marker to Redford’s cross, his header thundered in via the underside of the crossbar and over the line.

To cap a great night Ferguson’s 89th-minute secured the win and ensured Dundee United would achieve their fourth win over Barcelona in European competition having beaten them twice in the Fairs Cup of 1967, not to mention piling more pressure on manager Venables and his team, who had reached the European Cup final the year before.

Awaiting the “Tangerines” in the semi-final were Borussia Moenchengladbach – who were undefeated in 55 European home ties since 1970 and rightfully confident of progressing. After a no-score draw in the home-leg it looked like the hard-tackling side held the advantage heading back to Germany.

However, in the away leg the rare counter-attacking style adopted by United worked wonders, with Iain Ferguson again grabbing the opener and Redford settling matters with another final-minute strike – United were through to their first ever European final.

Sandwiched between the two encounters with yet another European giant was a feisty semi-final against cross-city rivals Dundee at Tynecastle. Coming from 2-1 to eventually win 3-2, United were now in the final of the Scottish Cup as well as about to face Gothenburg in the two-legged UEFA Cup final. 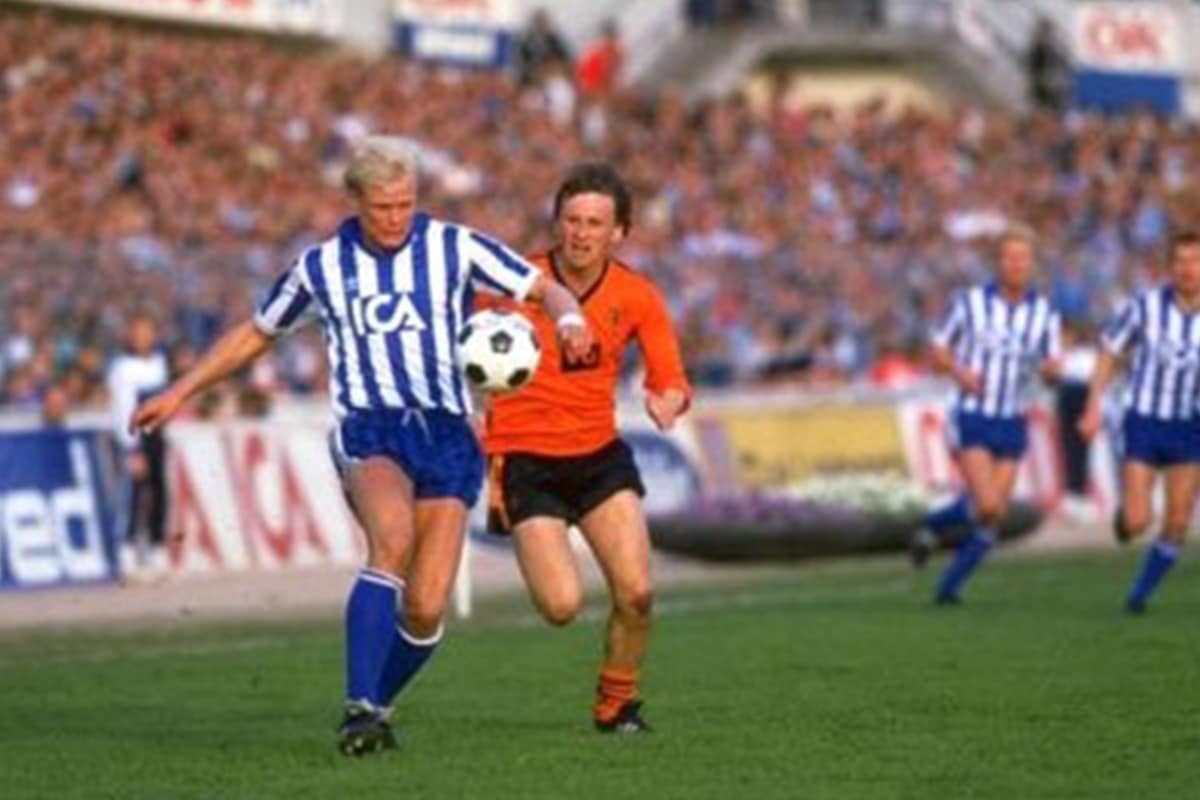 So it was on Wednesday 6 May that over 50,000 fans witnessed the Swedish leg of the tie and despite giving a fair account of themselves, United were pegged back by Stefan Pettersson's 38th minute goal.

Goalkeeper Thompson would be the hero for United that night, repelling wave-after-wave of attacks despite playing with five stitches in a head wound sustained in the opening minutes of the game – ensuring the two sides would only be separated by the one goal going into the second leg.

In the meantime, and with their League season now completed, United had a date at Hampden Park for the Scottish Cup final against St Mirren. It was a dull affair, lacking style, fluency and anything really to get excited about, perhaps due to the sheer amount of games played that season, and drifted predictably into extra time.

With just nine minutes of the extra-period remaining and still bemoaning a disallowed goal, a St Mirren break-away attack gave them the only goal of the game and meant United would be facing the very real possibility that they would have no silverware to show for what had been such a promising season.

Just days later and with little time to feel sorry for themselves, 21,000 supporters packed into Tannadice for the return leg of the UEFA Cup final – with an audience of over 70 million people tuning in across Europe too.

However, United fans’ hopes were dashed by a crucial away goal barely 22 minutes into the match from Lennart Nilsson, and although Clark gave the hosts hope on the hour mark, and despite a flurry of chances, the Tangerines couldn't score the two goals needed for victory.

Two painful defeats in a matter of days provided something of a bitterly disappointing and undeserved anti-climax for a United side who had more than held their own on three fronts and against some of the biggest names, not just in Scotland but on the continent too.

McLean and his players have rightfully gone down in Tannadice folklore thanks to what they achieved during the 1986/87 season, but the changing landscape of Scottish football and the domination of Celtic and Rangers in subsequent seasons has meant that similar achievements by the likes of Dundee United and the other members of the so-called “new firm” are highly unlikely anytime soon.