A throw-in. Stuart Dallas takes it. Dallas to Kalvin Phillips. Back to Dallas. Dallas to Jack Harrison. Harrison’s back heel finds Dallas again. Dallas lays Harrison through. Harrison takes a touch to set himself and angles the ball into the box.

Kemar Roofe runs on to it and hits it first time. It flies past the onrushing Kelle Roos and into the far corner of the Derby goal.

This is football, Marcelo Bielsa style. It gives Leeds United a 1-0 advantage over Derby County in the Championship play-off semi-final ahead of the return leg at Elland Road on Wednesday.

As things stand, the stage seems set for a play-off final and a glorious return to the top tier of English football.

But when the curtains are drawn on Wednesday night, there will be a notable omission. Roofe, the goal scorer on Saturday, will be absent from the field, laid low with a calf injury picked up during his appearance.

As luck would have it, Roofe’s probable replacement for the second leg has just returned from a two-match suspension picked up in the penultimate game of the season against Aston Villa. This campaign, Patrick Bamford has been in and out of the Leeds squad with injuries blighting his first season at the club.

In that time, he has become something of a persona non grata, a late goal at Bolton Wanderers and a brace against Preston North End doing very little to atone for a number of notable misses elsewhere.

But are Leeds fans right to be wary of going into their most important two games of the season with Bamford up front in place of the preferred Roofe?

It might surprise the fan base at Elland Road to learn that Bamford’s underlying figures are quietly impressive. In almost every case, his production shades out Roofe’s.

This even extends, they might be surprised to learn, into the area of goal scoring, where Bamford has scored 0.59 goals per 90 minutes compared to his teammate’s 0.53. With more minutes under his belt, Roofe has 15 league goals to Bamford’s 10.

Elsewhere on the pitch, Bamford’s all-around figures are generally good and show him to be more of a complete forward than an out-and-out striker.

He is more involved in build-up play more than Roofe—making 10.97 passes per 90 minutes compared to Roofe’s 9.72—and is a much more effective presser in the attacking third—with Roofe only managing 0.25 possessions per 90 minutes where Bamford is making an impressive 0.79. 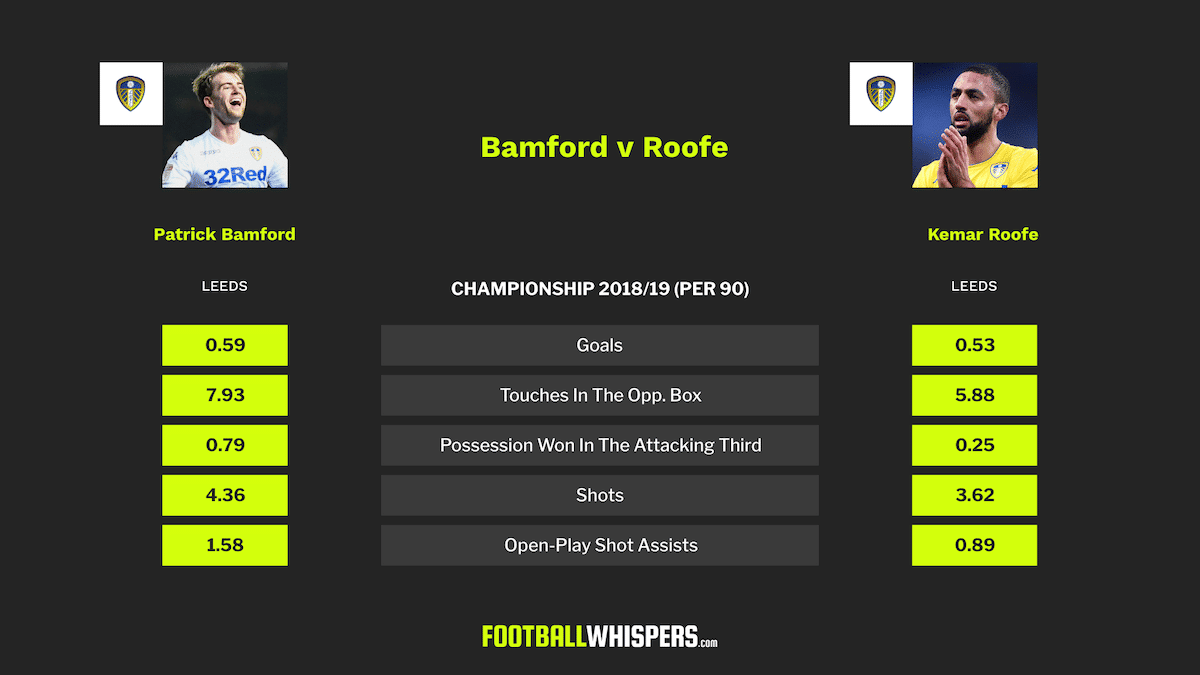 What this means is that, his woes in front of goal aside, Bamford is actually slightly better than Roofe at doing the things that don’t show up so well.

But goal scoring is obviously an important aspect of Bamford’s role. Leeds are not going to get to the Premier League through a good final third turnover numbers alone.

Drilling a little deeper into Bamford’s season, it becomes clear that his scoring problems have worsened through the course of the season. If you compare his player persona before and after April 6, you can see that there has been a decline in his play style which has seen him missing shots more often, missing the target more often and a reduction in his goalscoring.

If you compare Bamford’s Persona with that of Norwich City’s Teemu Puuki, the league’s top scorer, you see that Bamford is way off his output compared to his counterpart. This difference is a likely explanation of why Leeds were unable to match Norwich and Sheffield United in the final games of the season.

But what does this mean for the play-offs? Well, there are two things to say.

Firstly, if you compare Bamford and Puuki over the course of the whole season, you can see that there is a much higher correlation in their styles than there has been in the last month.

That isn’t to say that Bamford will turn things around, of course. But he has shown himself to be up to the task of playing up front in the Championship this season. The Leeds fans will hope he can pull it out of the bag for the next two games.

Secondly, while Bamford’s goal scoring has been a disappointment this season, it has been accentuated by a lack of regular goals from elsewhere in Leeds’ attacking line up. Take Norwich again: if you aggregate their five highest scoring players, you get 68 league goals between them. For Leeds, the figure is only 54.

Bamford is a more well-rounded player per output when compared to Roofe. This no doubt stems from the fact that he likes to drop off the line of defence and help his teammates in the build-up phase. In a team that was scoring more from outside the centre forward position, this might be okay. For a team like Leeds who rely on goals from the striker, it is less ideal.

Leeds have the advantage going into the second leg of the Championship play-off semi-final against Derby. Without Roofe, though, they will be hoping that the right Bamford shows up.