The Estadio de la Cerámica can be a quiet place. Villarreal have a decent set of fans, who can get behind the team, but it usually takes something on the pitch to get them excited, or a bad refereeing decision to get them animated.

Few players have chants for them, yet it’s not too uncommon to hear ‘BA-KAM-BU, BA-KAM-BU’ coming from the four corners of the ground.

And that’s because Cédric Bakambu is turning into a real tour de force in Spain. Only Lionel Messi and Simone Zaza have more goals than the 26-year-old in La Liga this season.

With Villarreal having a very modest budget compared to Premier League sides, it’s no surprise to see him linked with a move to England, with West Ham United, Newcastle United and West Bromwich Albion all credited with having an interest in ‘Bakagol’, as he calls himself.

Born in Vitry-sur-Seine, France, in 1991, Bakambu spent some time with local side Ivry aged ten before joining Sochaux in 2006.

It was with the team in Eastern France where he made his professional debut in August 2010, coming on as a late substitute for Modibo Maïga in a 2-1 win over Arles-Avignon.

He went on to make ten further appearances in all competitions during the 2010/11 season, but failed to score, with his first professional goal coming on September 17, 2011 in a 2-2 draw at Lille.

After being moved to the right wing until manager Hervé Renard, Bakambu left Sochaux in September 2014, after 21 goals in 107 appearances in all competitions.

He moved to Bursaspor for €1.8million and had a hugely impressive season in Turkey, ending the campaign with 21 goals in 39 games in all competitions, including his first professional hat-trick against Balıkesirspor.

This record saw him attract interest from across Europe and after less than a year in Turkey, he moved to Spain with Villarreal paying an estimated €7million to bring him in.

His first season with the Yellow Submarine was hugely impressive, with 22 goals in 50 appearances in all competitions.

His second was a bit more testing. A hamstring injury saw him miss the first ten games of the season, where after manager Marcelino’s departure, Villarreal struggled at the start of the term, being knocked out of the Champions League at the playoff stage.

And then when he did return, Nicola Sansone was in form and had taken his place in the first team.

He did eventually fight back though, scoring 12 in 34 games in all competitions.

But it’s this season where he looks back to the player that terrified La Liga defences in his first year in Spain, with eight goals in ten games and one more in the Europa League, too.

Despite being born in France, and playing for French youth teams up to under-20 level, Bakambu plies his international trade for DR Congo as he has Congolese parents.

Since his debut in 2015, he has seven goals in 16 appearances for his national side.

What are Bakambu’s main strengths?

There’s no doubt that he’s a very good finisher, which is crucial for a striker.

Of the players to have 22 or more shots in La Liga so far this season, only Girona's Cristhian Stuani has a greater shot accuracy than Bakambu’s 65 per cent.

But his all-round game isn’t just about goalscoring, although that is important as a forward.

Often playing as part of a front two, his link-up play needs to be on point and it often is, he’s aware how to bring his team-mates into play.

He’s not afraid of playing long passes to put his team on the attack, as you can see below with the first-touch ball that sends Denis Cheryshev to the edge of the opposition box without even having to take a touch. 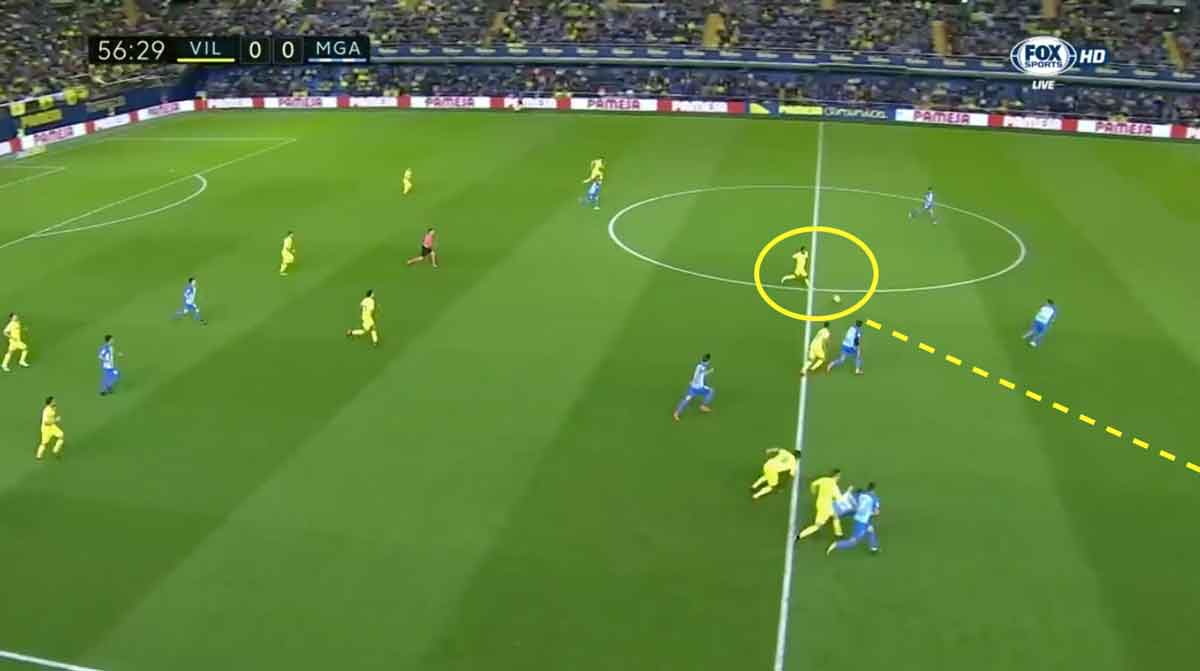 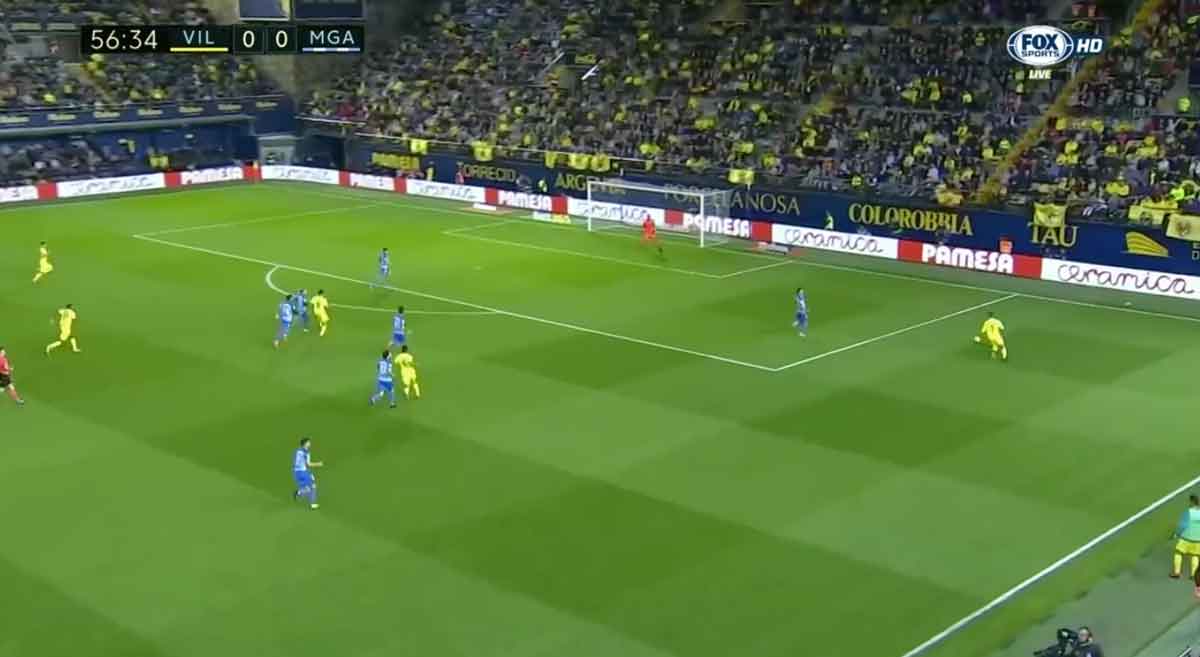 His partner for his first two seasons at Villarreal was mainly Roberto Soldado and the two of them built up a strong understanding.

As you can see below, the two of them work well, with Bakambu (circled in yellow) rising in the air, knowing where Bacca (circled in red) will be running, to send him through on goal with a header. 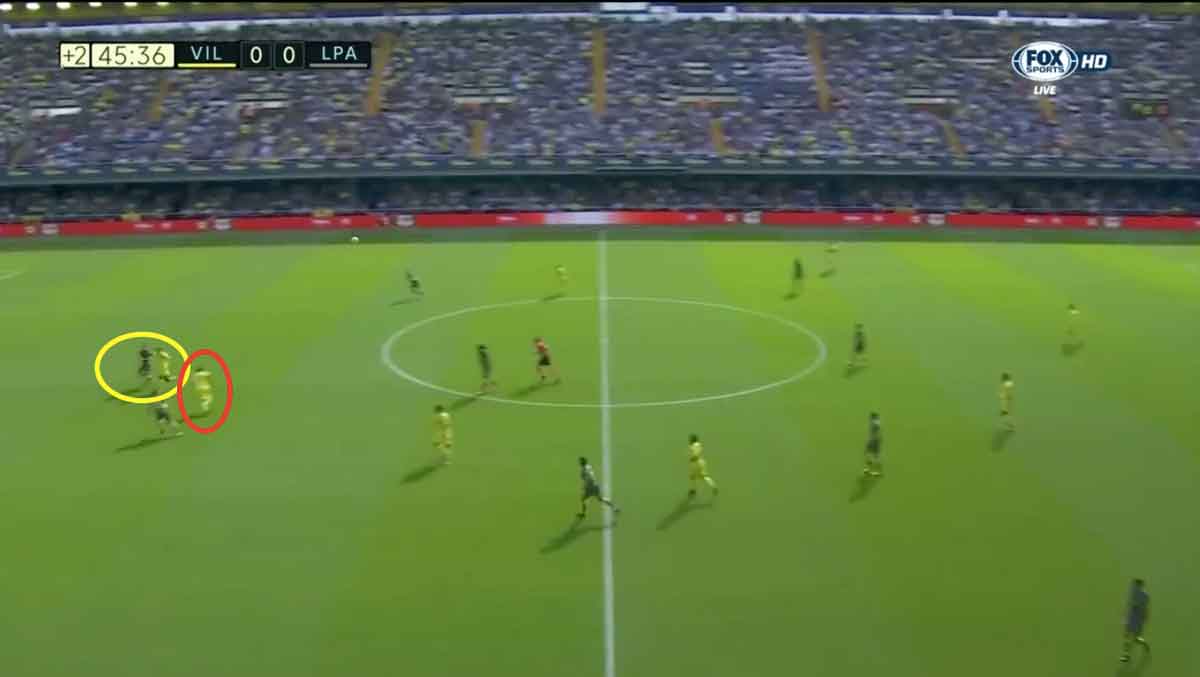 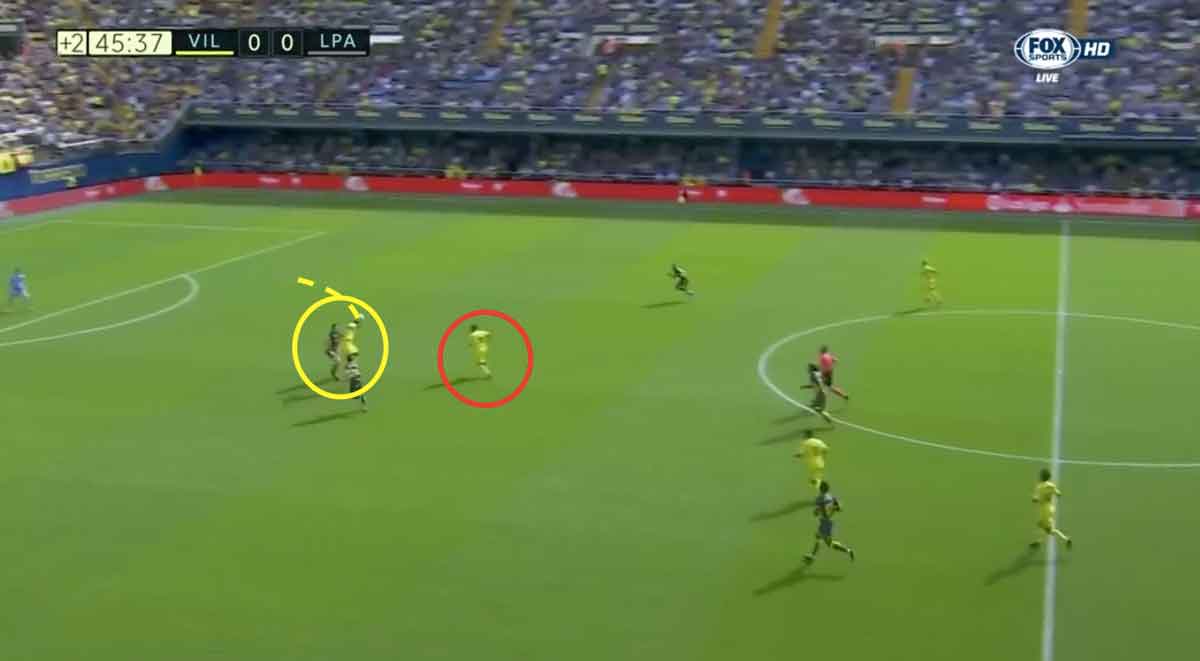 And he’d be perfect for a team that defends from the front.

He never stops running, always harassing the backline and is capable of pouncing on the smallest error and creating a goalscoring opportunity for himself or someone else. 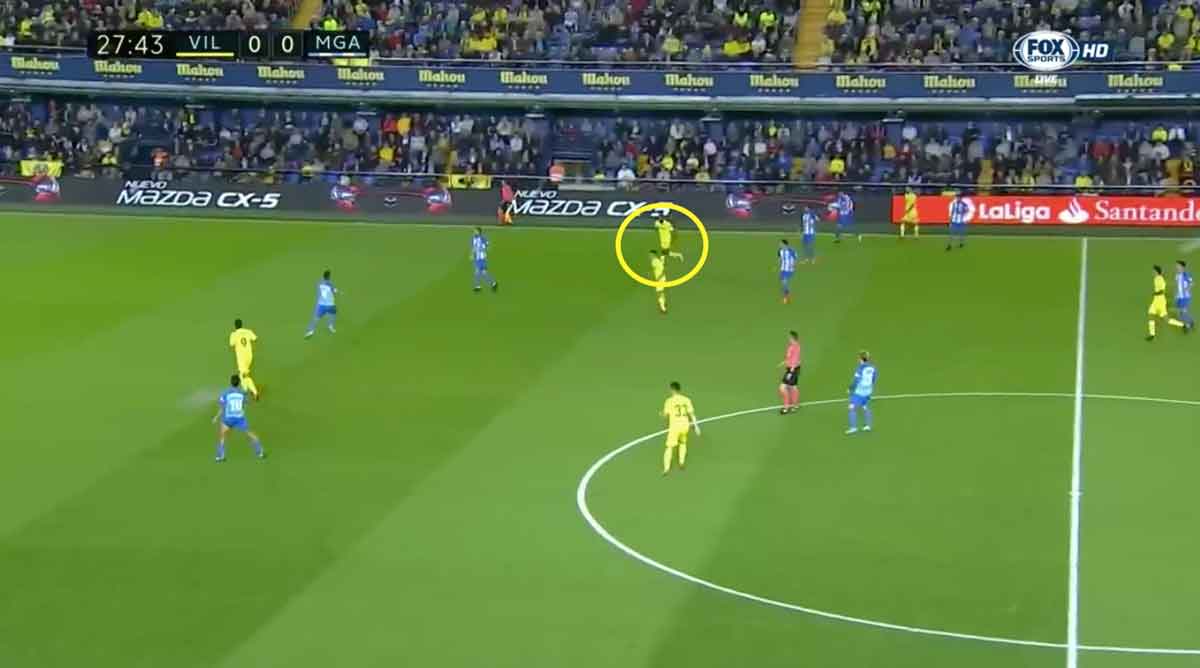 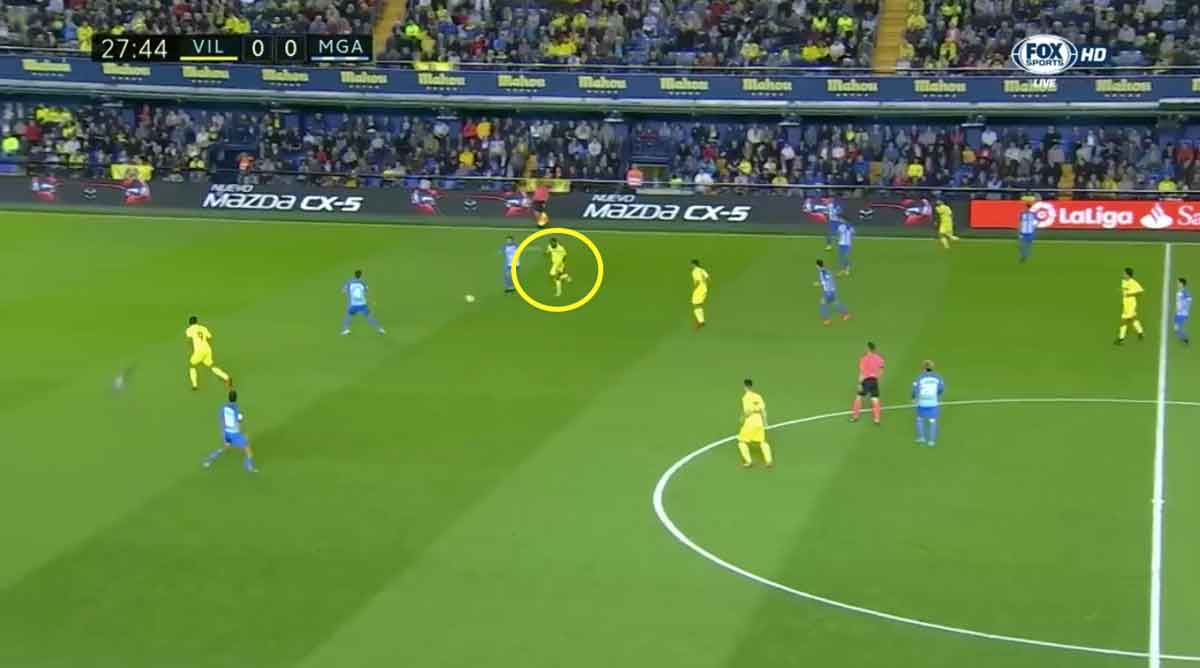 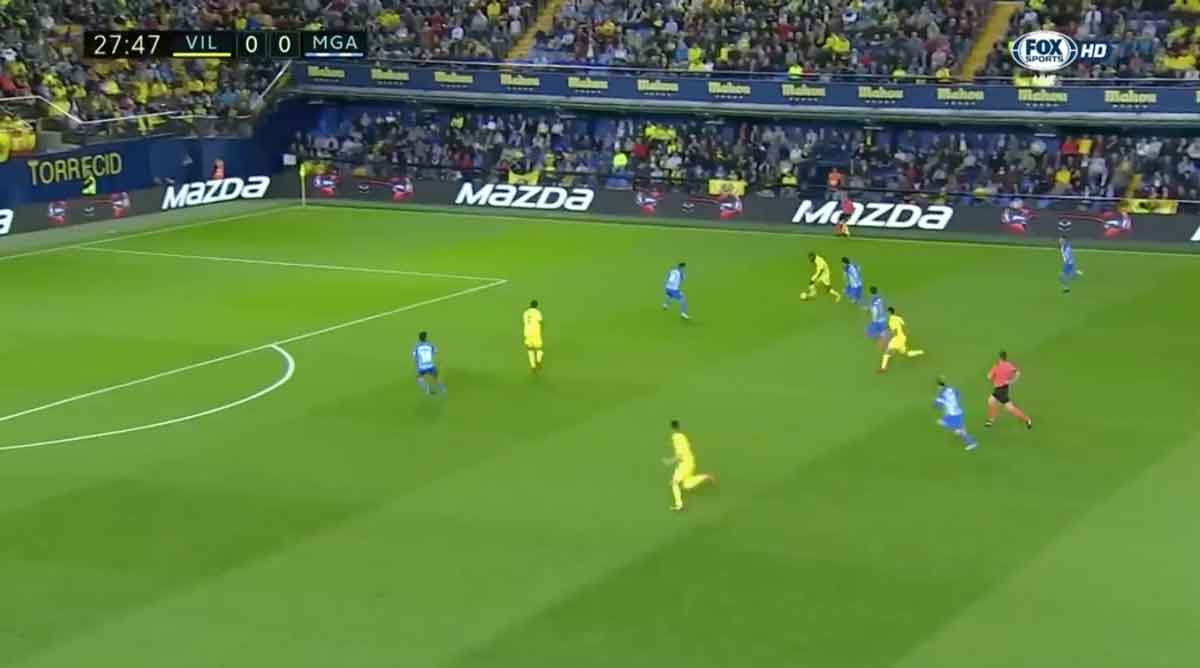 Above, you can see how the Congolese international anticipates a loose pass in the Málaga defence before making the most of it, pouncing just before the defender and setting up his strike partner Bacca.

He may not be the most gracious with the ball, but when he’s at the top his game Bakambu can take on players with great success. 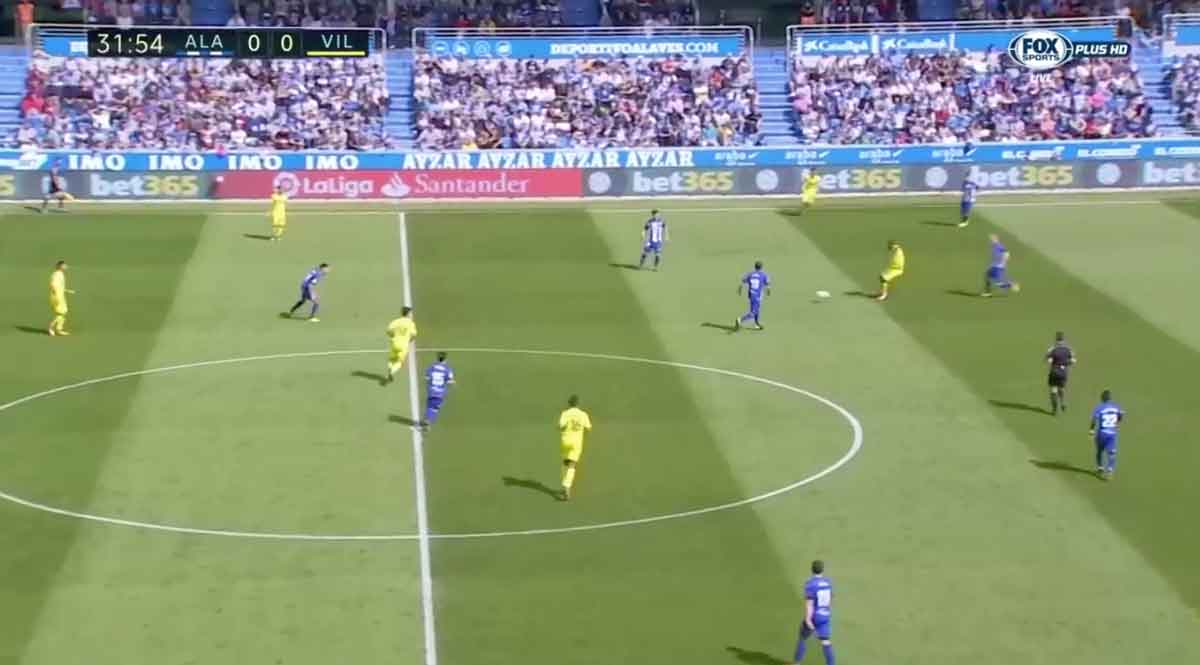 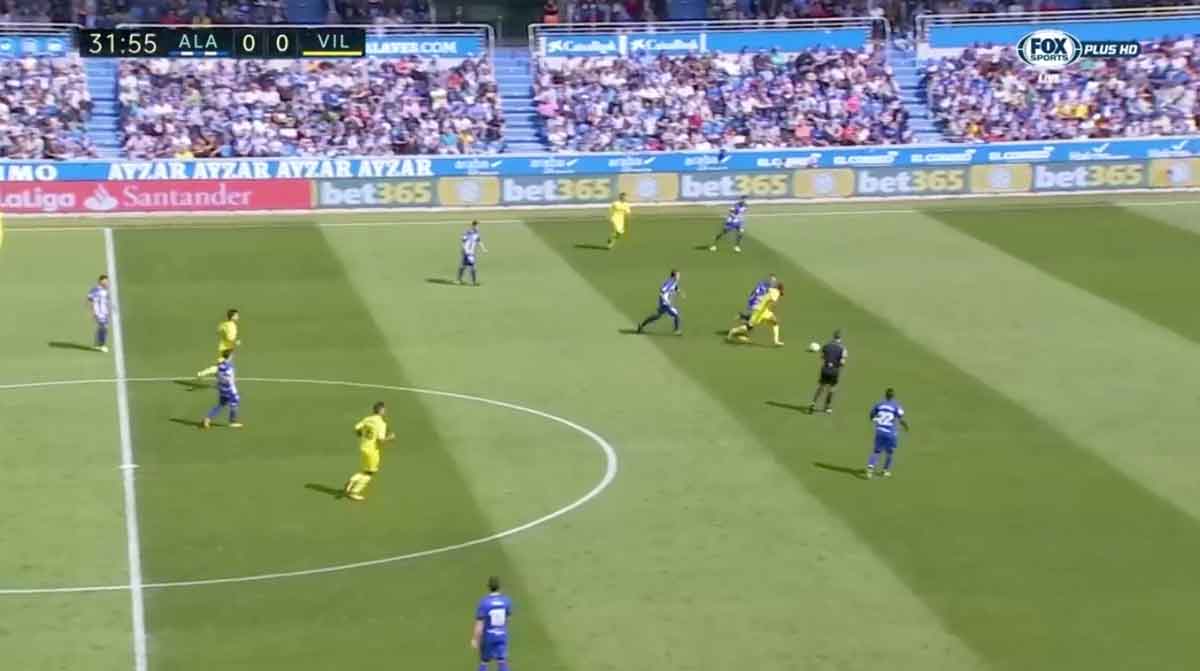 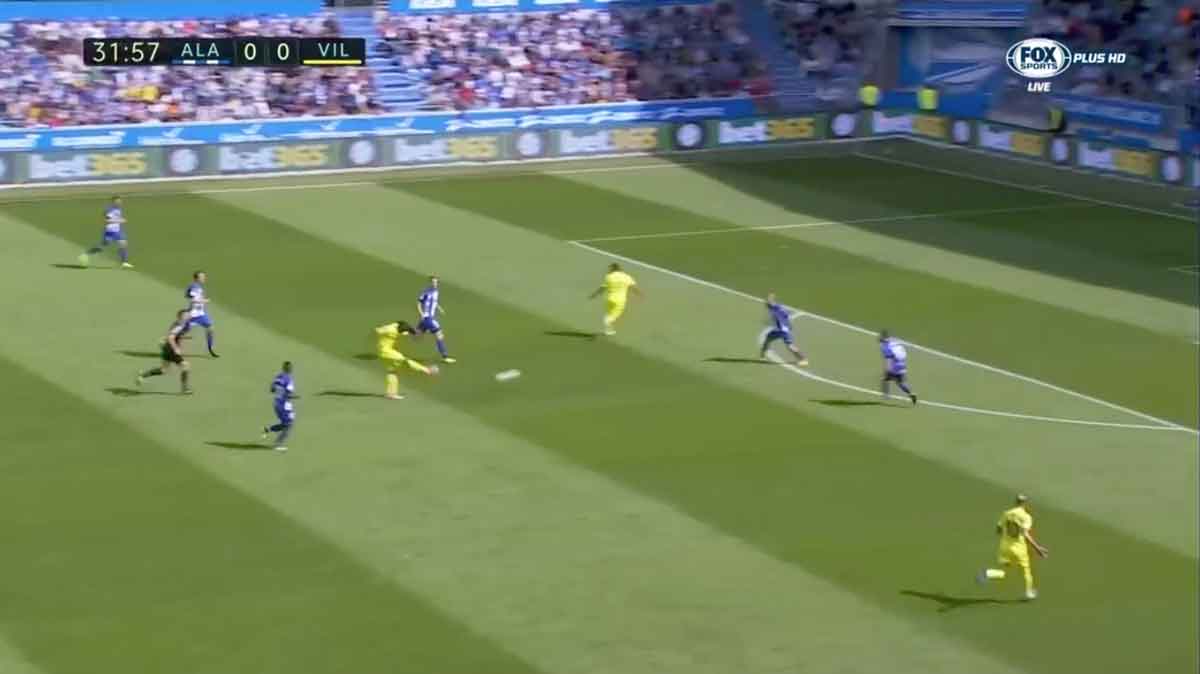 In the stills above, you can see how he takes the ball against Alavés, turns and dribbles past defenders into the space, before firing off a long-range shot that deflects home.

He underlined two of his skills above – if defenders stand off, and he will drop deep and run at them and if they stick tight, he can spin off them. He's a defender's nightmare.

If he’s feeling confident, he is definitely capable of speeding past players, using his power to get near the opposition penalty area and getting a shot away.

What are Bakambu’s main weaknesses?

While Bakambu has been largely prolific for his Villarreal career, he had a real dry patch last season and his game suffered because of it.

He had a 21-game period in all competitions where he scored just two goals and that really affected his confidence – he needs to prove he can be consistent throughout the entire season.

The striker was snatching at his shots and looked like a one-season wonder in Spain.

If he moves somewhere new, it is important to keep faith with him, as he can come back – he ended the La Liga season with seven goals in eight games.

His first touch can on occasions be exquisite, but as a hold-up player, the ball can often bounce off him, and that can be frustrating to watch.

He is also largely right-footed. Just five of his 28 La Liga goals have come with his left foot, and none have been headers – an area of his game he really needs to work on.

The 26-year-old has only really thrived as part of a front two at Villarreal. He was nowhere near as effective in a 4-2-3-1 and that may be a worry for clubs who don’t play with two up front. 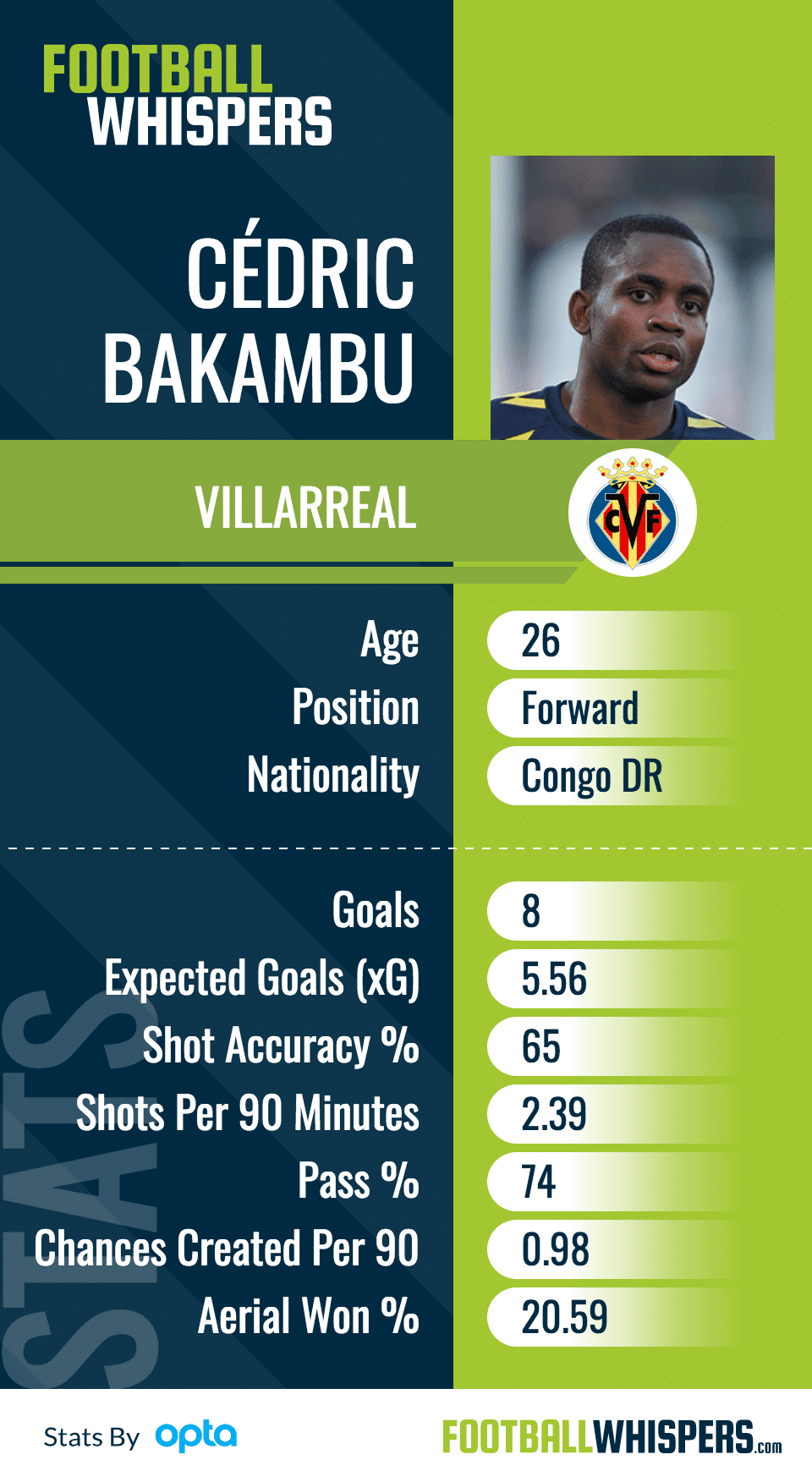 How much is Bakambu worth?

There is no doubt that Villarreal will not want to sell their star man, but as is the case with anyone at the Estadio de la Cerámica, everyone has their price.

Marca claims West Ham made an unsuccessful offer of around €25million last summer, which would have been the second biggest sale in the Yellow Submarine’s history after Eric Bailly’s departure to Manchester United.

Villarreal renewed his contract last summer and he is tied to the club until 2022, with a release clause that is believed to be around €40million (£35.9million).

That is a lot of money for a Spanish club, but when the likes of Michy Batshuayi moved for £32million, it doesn’t seem too expensive at all for a key player at a club that is playing in Spain’s top flight and a regular in European competition.

There are often fears when strikers come from Spain that they could get outmuscled when coming to England, that certainly wouldn’t be the case for Bakambu, and he has all the abilities to shine in the Premier League.

With the Hammers strikers seemingly perpetually injured, it’s always decent to have another option up front.

If David Moyes is considering playing two up front, a strike partnership of Bakambu and Javier Hernández has the potential to be the best in the league out of the top six.

Tony Pulis’ side are on a downwards spiral at the moment and have scored just six goals from open play.

They’ve flirted with two up front at times this season and Bakambu could work well with Salomón Rondón or Jay Rodriguez.

What’s more, if anyone can unlock his heading ability, surely it will be Pulis.

The Magpies’ top scorers this season are Jamaal Lascelles and Joselu, with two each.

It’s clear Rafael Benítez isn’t happy with his strike options, and someone like Bakambu is a proven goalscorer and that will help keep Newcastle up.